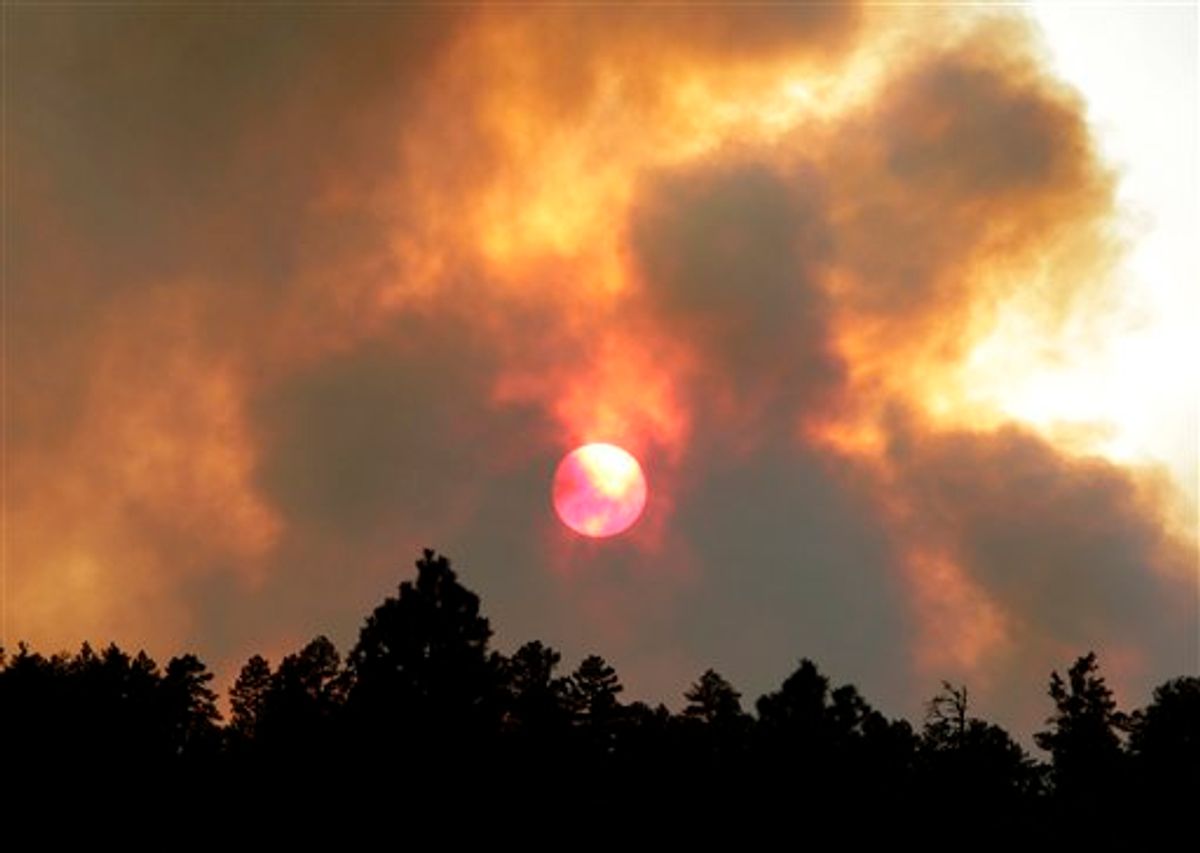 The sun sets behind smoke from the Wallow fire Tuesday, June 14, 2011 in Luna, N.M. The focus of the battle against the massive wildfire burning in eastern Arizona was on New Mexico as crews continued to light fires around the town of Luna to stop the flames. (AP Photo/Matt York) (AP)
--

Gusty winds and high temperatures are hampering firefighters trying to protect homes, a popular national park and tinder dry patches of forest from several wildfires burning throughout the Southwest.

Along the New Mexico-Colorado border, the winds Thursday pushed one fire toward breaks that had been carved into the rugged landscape by bulldozers. Crews had anticipated the fire's movement and were prepared to hold the line with help from helicopters and air tankers.

The winds weren't as strong as expected, but fire officials said the area wasn't out of danger.

"For the next couple of days we're still going to see gusty winds, very hot temperatures and dry conditions. It's possible we won't have a red-flag warning, but we will still see some weather conditions that will challenge our containment lines," fire information officer Denise Ottaviano said.

The fire had been sending up giant plumes of smoke that could be seen from Raton, N.M., each afternoon as the flames ate through nearly 26,000 acres of rugged terrain along the state line.

Thursday was a little different. Smoke wasn't as dense as earlier in the week, partly because crews had made progress on the southern flank and the winds were pushing out of the southwest and away from town.

Some nearby residents were able to return home Wednesday and more evacuations were lifted Thursday, but residents who live closest to the eastern and some northwest of Raton remained out of their homes for another day. Fire officials confirmed that eight homes and six other structures have been destroyed.

The nearly 700 firefighters battling the fire did experience some gusts and temperatures near triple digits.

The wind also raised concerns among firefighters battling Arizona's largest blaze at 760 square miles, or 487,016 acres, in the eastern part of the state. A pre-evacuation notice for an area in southeast Eagar was issued in the afternoon because of high winds and possible spot fires.

Containment on the Wallow Fire inched up to 33 percent, but more winds were predicted through the weekend.

"We're kind of keeping our fingers crossed for the next three days because of the predictions," fire information officer Richard Hadley said.

Fire managers were concerned about the fire burning in the Blue Range area south of Alpine -- the least secure part of firefighters' lines and closest to the nearest town still threatened, Luna, N.M., where about 200 people live.

A line of cut fuels and intentionally burned areas was completed between Luna and the fire itself at daybreak Thursday, and fire commanders expressed confidence it would hold.

More than 4,600 firefighters are assigned to the fire.

A single campfire was the fire's "most likely cause," Apache-Sitgreaves National Forest supervisor Chris Knopp said. He confirmed that investigators had questioned two people but declined to say any more about the investigation. He called them "persons of interest," not suspects.

Hundreds of firefighters have been working for days along the Mew Mexico line to keep the flames out of Luna. Thousands of others are working the rest of the fire, including around three mountain resort towns in Arizona.

The blaze became the largest in state history Wednesday, exceeding a 2002 fire that burned 732 square miles, or 469,000 acres, and destroyed 491 buildings. Though larger in size, the latest fire has destroyed 32 homes and four rental cabins.

Firefighting crews were busy across the West Thursday.

A blaze in the Coronado National Forest in southern Arizona has burned or damaged at least 40 homes and 10 other structures. Officials say the fire has grown to over 14 square miles, or about 9,300 acres, and is 17 percent contained.

Winds and searing temperatures also hit southeastern New Mexico, where firefighters battling a blaze that surrounded Carlsbad Caverns National Park had it 90 percent contained by Thursday night. Firefighters were confident they had corralled the blaze and protected the park's visitor center and employee housing. The fire began Monday and charred about 30,500 acres of desert scrub and forced the park to close for three days.

The outlook from the National Interagency Fire Center in Boise, Idaho, calls for fire potential to be above normal in some parts of the West through September.