Authorities halt efforts after detecting a sharp spike in radiation 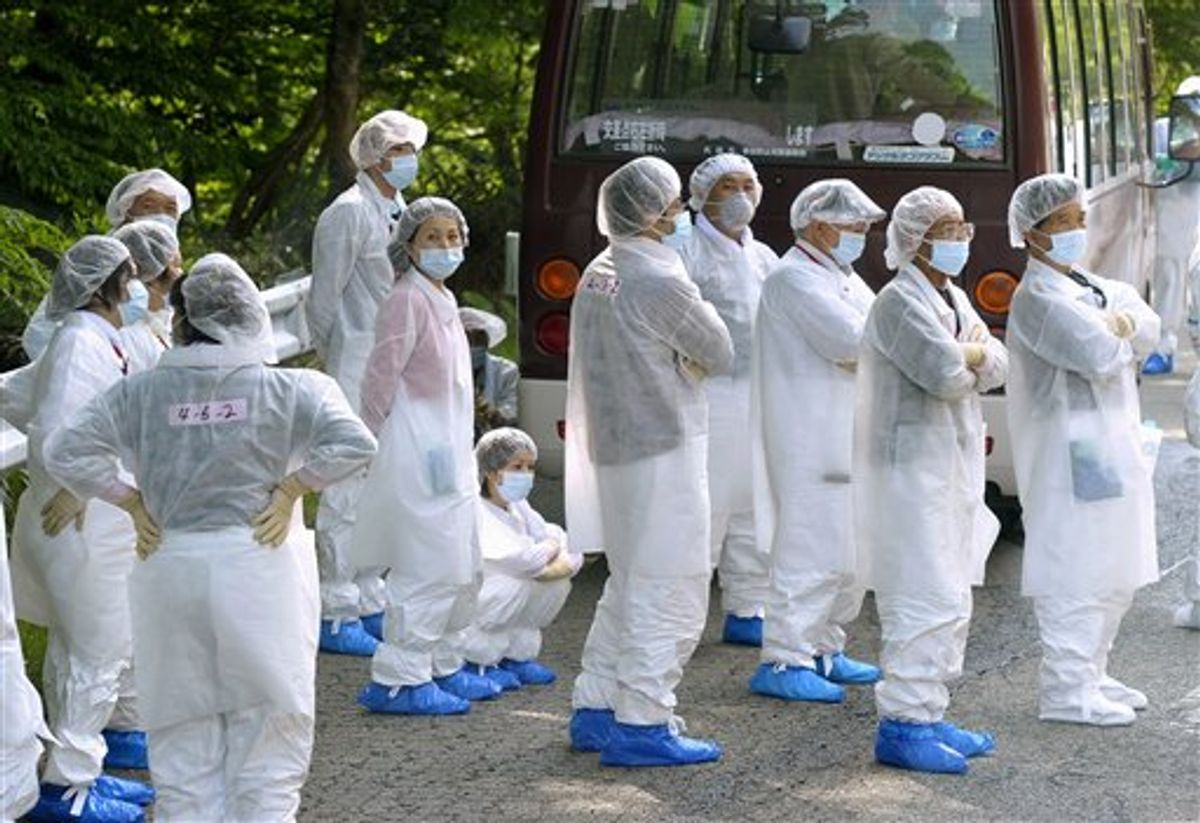 Evacuees in protective clothing wait for a substitute bus to come beside their disabled bus, after they returned for a a brief visit to their houses in the exclusion area, in Okuma, Fukushima prefecture, northeastern Japan, Saturday, June 4, 2011. The tsunami-crippled Fukushima Dai-ichi nuclear power plant is located in the town. (AP Photo/Kyodo News) JAPAN OUT, MANDATORY CREDIT, NO LICENSING IN CHINA, HONG KONG, JAPAN, SOUTH KOREA AND FRANCE (AP)
--

A system to clean massive amounts of contaminated water at the site of Japan's nuclear disaster was shut down Saturday, just hours after it began full operations, because a component filled with radioactivity much more quickly than expected.

Tokyo Electric Power Co., which operates the tsunami-hit Fukushima Dai-ichi nuclear plant, is investigating the cause and isn't sure when it will restart the system, company spokesman Junichi Matsumoto said.

Fresh water is being pumped in to cool damaged reactor cores, and is getting contaminated in the process. Some 105,000 tons of highly radioactive water have pooled across the plant, and could overflow within a couple of weeks if action is not taken.

In earlier tests, the water treatment system reduced cesium levels in the water to about one-10,000th of their original levels. The system began full operations Friday night after a series of problems involving leaks and valve flaws.

The system was suspended in early Saturday when workers detected a sharp radiation increase in the system's cesium-absorbing component, Matsumoto said. Radioactivity in one of 24 cartridges, which was expected to last for a few weeks, had already reached its limit within five hours, he said.

Japan's March 11 earthquake and tsunami knocked out power to the nuclear plant, incapacitating its crucial cooling systems and causing three reactor cores to melt. TEPCO aims to bring the reactors to a stable cold shutdown state by early January.

The water treatment system is to be eventually connected to a cooling system so the treated water can be reused. But treating the water will create an additional headache -- tons of highly radioactive sludge will require a separate long-term storage space.

The Fukushima crisis shattered Japan's confidence in the safety of nuclear energy and prompted anti-nuclear sentiment. But there are also concerns that Japan will face a serious summertime power crunch unless more of its reactors get back on line.

Of Japan's 54 nuclear reactors, more than 30 -- including six at Fukushima Dai-ichi and several others that stopped due to the quake -- are out of operation.

Economy and Industry Minister Banri Kaieda said Saturday that the rest of the nuclear plants in Japan are safe and their reactors should resume operations as soon as their ongoing regular checks are completed. He said nationwide inspections this week have found that Japanese nuclear power plants are now prepared for accidents as severe as the one that crippled Fukushima Dai-ichi.

Resumption of about a dozen reactors undergoing regular checkups is up in the air amid growing local residents' fear of nuclear accidents. Many of the plants' hometown officials have said restarting any pending reactors would be impossible amid the ongoing crisis.

Kaieda, however, said Japan needs the power. "Stable electric supply is indispensable for Japan's reconstruction from the disaster and its economic recovery," he said in a statement.

The inspections focused on measures to reduce the risk of hydrogen explosions inside containment buildings as one of the lessons learned from the Fukushima crisis, the world's worst atomic accident since Chernobyl.

Japanese nuclear plant operators have already taken other steps to improve accident management since the disaster to maintain core cooling capacity during blackouts.