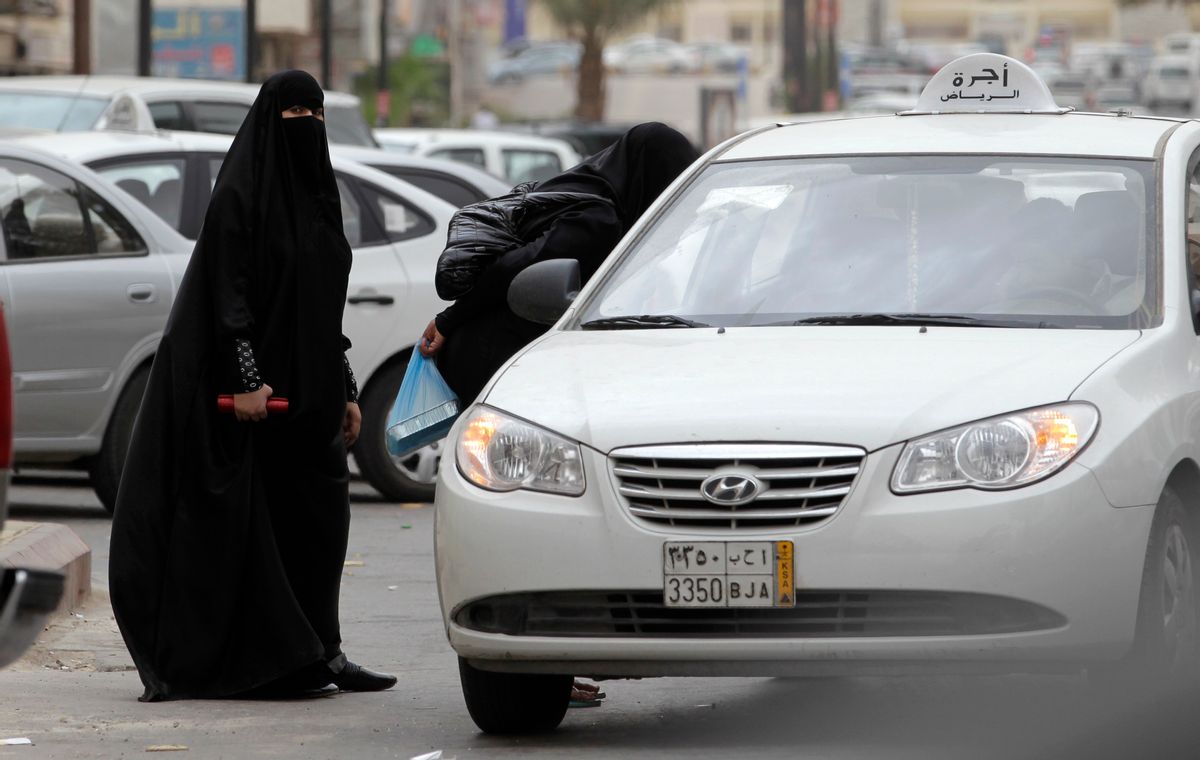 FILE - In this Tuesday, May 24, 2011 file photo, Saudi women board a taxi in Riyadh, Saudi Arabia. A campaign to defy Saudi Arabia's ban on women driving opened Friday, June 17, 2011 with female motorists getting behind the wheel, including one who took a 45-minute tour through the nation's capital, amid calls for sustained challenges to the restrictions in the ultraconservative kingdom. (AP Photo/Hassan Ammar, File) (Associated Press)
--

In the latest protest against Saudi Arabia's ban on driving by women, about 40 women on Friday took part in what the New York Times called "random acts of women driving."

Friday's protest actions followed the May 22 arrest of Manal al-Sharif, a 32-year-old Saudi woman who posted a video of herself driving on YouTube. (In response to a question about that incident, a U.S. State Department spokesman offered this mute statement to reporters: "We understand there’s an active debate on a lot of these social issues in Saudi Arabia, and we trust the government of Saudi Arabia to give careful consideration to these voices of its citizens as they speak about issues of concern.")

Curiously, there is no written law barring Saudi women from driving. Rather, the ban is rooted in rulings by conservative Muslim clerics who hold sway in the kingdom. And this particular limit on women's freedom has long been controversial, drawing public protests as far back as 1990.

To learn more about the history of the driving ban and the current protests, I spoke to Christoph Wilcke, senior Middle East researcher at Human Rights Watch. The following transcript of our conversation has been edited for length and clarity.

I understand there's not actually a written law that says women can't drive. So how does this ban work?

Saudi Arabia applies Islamic sharia law, which means it is uncodified law. It is whatever the government or judges say it is. And it may change from one day to the next. The country does have written laws, except for in some very important areas such as criminal law. So there is no law that says women cannot drive.

There are several sources of making law. First there is the council of ministers, which carries out the legislative and executive functions of the state. The council writes laws and enforces them. Then there is a royally appointed council of senior religious clerics which gives out authoritative rulings of Islamic law. They usually follow the strict Wahhabi, or Hanbali, interpretation of Islamic law, and when they say something, it is binding. Finally, there is the office of the mufti who issues fatwas -- that is, he responds to individual queries about what Islamic law is on particular questions. But the mufti's answers are not binding. In the early 1990s, in response to a question about whether it was Islamically acceptable to drive, the mufti issued a fatwa that said women must not drive. Around that time the Ministry of Interior also issued a decree saying that women were not allowed to drive. But whether a ministry can make law is up for debate.

So how is it that driving as a woman is not permitted?

Because there is no written criminal law, the government can detain anyone for anything. So Manal al-Sharif was detained and accused not only of driving as a woman but also of stirring up internal strife. Now, stirring up internal strife is not written down as a crime, either, but the government can make it up as it goes along. There are people in Saudi Arabia who are detained, accused, charged, tried and convicted for the unwritten crime of not submitting complaints about the government in the proper fashion -- i.e. complaining in the media rather than submitting a petition to the ruler.

Is the driving ban enforced?

Women have always ridden camels and donkeys in much of the Islamic world, including what is today Saudi Arabia. Women in the rural areas of the country have driven cars in the past and continue to do so. They don't, however, have licenses. And there has for some time now been a modern movement to get women the right to drive. There was a famous 1990 driving by 47 women in Riyadh. Starting in 2006-07, a number of women started petitions for women to drive. In 2008 or so, a woman filmed herself driving in the eastern province and put the video on YouTube. But it didn't cause the reaction that the current protests are getting because it was a different political environment. There was also a time when several women went to their local traffic offices and said, "OK, we can't drive, but who said we can't apply for a driver's license?" They were turned away.

In the Shura Council, the royally appointed parliament with some legislative powers, there were twice proposals in the mid-2000s about how to move toward allowing women to drive. But these proposals never made it to a vote.

Is it possible to know how the population views this ban? And is there a particular constituency that favors the ban?

There's no polling that I'm aware of, and I'd be a little bit suspicious of polling in Saudi Arabia, especially of women, because it's hard to get a good sample. You can't speak to women on the street, for example. There are some vocal groups on both sides of the issue. There's an online petition by some Saudi women called "My Guardian Knows What’s Best for Me," saying that they don't want any new rights. Then there was a small group of men who started a Facebook group saying they would beat any woman who drives on June 17.

But the most important group that supports the driving ban is religious conservatives. They view any increase in women's position as a wedge that will undermine male-dominated society. This group is powerful, but many Saudis believe that they are a minority. Now, the number of women who want to be able to drive is quite large. It touches on every woman's life because they have to pay $200-$300 per month to your foreign driver, or you can't get around.

What has the reaction of the regime been to the recent protests?

I think they've been caught on the back foot on this one. It's different from the Shia in the eastern province protesting for the release of political prisoners. It's different than an Arab Spring-style day of rage coming to Saudi Arabia. This is a social issue. In the end it has everything to do with political structure and male dominance, but it's not about regime change. The initial reaction to detain Manal al-Sharif produced such a strong reaction inside Saudi Arabia that the government is now thinking twice about how to handle this. There are so many people who want the ban lifted among the elites and the talking classes. In those circles, I'm sure the support for lifting the ban is overwhelming.