Legendary saxophonist Clarence Clemons is gone, and The E Street Band will never be the same. Neither will I 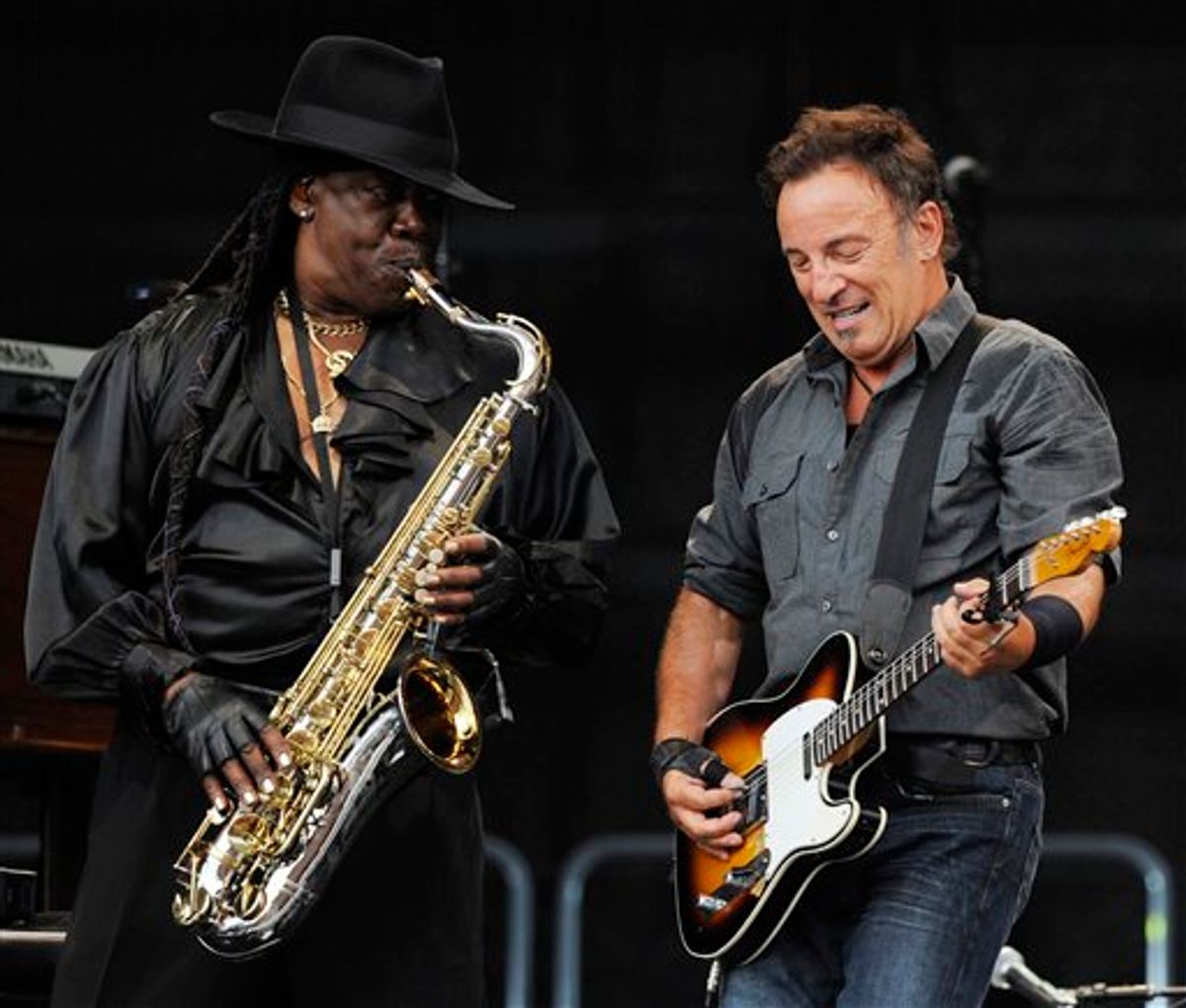 FILE - In this July 2, 2009 file photo, U.S. rock singer Bruce Springsteen, right, and saxophonist Clarence Clemons perform during the first German concert of his "Working On A Dream" European tour in the Olympic stadium in Munich, Germany. A person who has worked with Clemons in the past confirmed Sunday night, June 12, 2011 that Clemons has suffered a stroke. (AP Photo/Christof Stache, File) (AP)
--

It was the loudest noise I’d ever heard.

It was June 24, 1993, and Bruce Springsteen was ending his "Human Touch"/"Lucky Town" tour with two New York-area shows, one at the Brendan Byrne Arena in East Rutherford, N.J., the venue he’d opened in 1981. But this homecoming was different. Four years earlier, Springsteen had fired the members of his longtime E Street Band in favor of working with other musicians. He recorded two albums with studio pros, then toured behind the records with a new band put together shortly before hitting the road.

The fan reaction was mixed, to be kind. The touring band – though it featured some talented players – felt less like a new direction than an attempt to recreate the E Street sound without the actual E Streeters. It seemed as if that band’s 20 years of history had come to an ignominious end.

But there was something in the air that night in the Meadowlands. E Street guitarist Steven Van Zandt had come out to play on "Glory Days," and the crowd was buzzing when a horn section kicked into the intro for the E Street classic "Tenth Avenue Freeze-Out." Then, in the last verse, when Springsteen sang the line "When the change was made uptown/And the Big Man joined the band," the Big Man himself – saxophonist Clarence Clemons – came on stage, resplendent in a black suit and white hat, horn in hand, and blew a riff that brought the crowd to its feet. They filled the arena with a sustained roar that was like nothing I’d ever heard before. It drowned out the musicians on stage. The building shook.

Of all the times I’ve seen Clemons perform, that night is one of my most vivid memories. Not only for what a great show it was – and the amazing outpouring of love that met his appearance – but for what it signified. Less than two years later, Springsteen reformed the E Street Band to record new tracks for a greatest hits album. In 1998, he released a box set of unreleased songs, most featuring the E Streeters, and then launched a full-scale reunion tour the following year. The E Street Band was back, this time to stay.

What the future of the band will be now, with Clemons’ death yesterday at age 69, from complications of a stroke suffered June 12, is uncertain. But for me at least, the E Street Band that I knew and loved will never exist again.

I grew up in the beach town of Long Branch, N.J., about five minutes north of Asbury Park. I was familiar with some of Springsteen’s earlier bands, including the heavy metal/jam quartet Steel Mill, but wasn’t old enough to see them in their heyday. But when "Born to Run" came on the radio in the mid-’70s – and Springsteen simultaneously appeared on the covers of Time and Newsweek – it was something special. Here was a local guy singing about places I knew, but putting them in a universal context. "The Palace" mentioned in "Born to Run" became something more than the crumbling amusement arcade I’d known for years. In Springsteen’s songs, the "Circuit" – a teenage cruising area along the beach in Asbury – assumed an almost mythic quality.

Clemons and his saxophone were an essential part of that transformation. The only E Street Band member to share an album cover with Springsteen, Clemons was a larger-than-life character who brought a soulful R&B vibe to the songs of a scruffy street poet. Without Clemons, there would be no "New York City Serenade," no "Kitty's Back" and certainly no "Jungleland."

Over the last 32 years, I've seen more than 100 Springsteen performances, from impromptu appearances at tiny clubs to sold-out stadium shows. I've attended multiple nights on every tour since 1980, and Clemons loomed large at all of them. He was the rock of E Street, supporting Springsteen musically as he had physically on the cover of "Born to Run." He was the band's "Minister of Soul," as Springsteen often referred to him, introduced on-stage at various times as "The Big Man," "The Kahuna," "The Duke of Paducah," able to "leap tall refineries in a single bound." His sax sound was a mixture of King Curtis, Junior Walker and Gene "Daddy G" Barge. It could be breathy and sweet ("Secret Garden") or loud and raucous ("Sherry Darling"). An E Street show never really caught fire until Clemons stepped forward to blow his first solo of the night.

The oldest of the E Streeters, the Big Man had more than his share of health problems in recent years. He'd had hip and knee replacements and multiple back surgeries. On stage, he often sat for long stretches, rising only to play a solo, sometimes missing his cues. But in March 2009, I sat in the stands at Asbury Park's Convention Hall, a 1920's-era dance hall on the boardwalk, at a rehearsal show for the band's "Working on a Dream" tour, which was about to kick off. They opened with "Badlands," with Springsteen leaping onto a ramp that led out into the audience, and playing a ripping guitar solo. When Clemons joined him for the sax solo, they both looked 25 again, standing side by side, spotlighted in a sea of people, the crowd on both sides reaching up to touch them. Despite the celebratory nature of the moment, it also choked me up a little. I wondered how many chances there would be to see that sight again.

There were more nights, of course. The band toured for most of that year, but those final shows had the bittersweet tang of last days. In Baltimore, at the penultimate show of the tour, an emotional Clemons hugged Springsteen as if he didn't want to let him go. On the final night, two days later, Springsteen played "Growin' Up," adding a long story about meeting Clemons for the first time in 1971, the aftermath of that encounter being a metaphor for the journey that followed.

That meeting is the stuff of legend. The way the Big Man tells it is not far off from the story Springsteen spun on stage. Clemons was playing with a cover band at the Wonder Bar on Ocean Avenue in Asbury Park, while Springsteen's pre-E Street band was at the neighboring Student Prince on Kingsley Street (both buildings are still there. The Wonder Bar continues to operate as a night club, the Prince has been many things over the years, including a male go-go bar). One stormy night, during a break in his set, Clemons walked over to listen to Springsteen play, and asked to sit in. "That night we first stood together, I looked over at C and it looked like his head reached into the clouds," Springsteen remembered years later. "I felt like a mere mortal scurrying upon the earth." A rock and roll partnership had been born.

I now live one town south of Asbury Park, and I’ve made the walk between those two buildings many times, imagining what that night must have been like. Last December, nearly 40 years later, I stood in a bone-chilling wind, with 100 other Springsteen fans, leaning against a metal barricade outside Asbury’s gutted Casino carousel house, while Springsteen and band were inside filming a mini-concert to promote a box set release of their 1978 album "Darkness on the Edge of Town." I never got in, and only caught occasional glimpses of the band through an open doorway, when some VIP entered or left. But when Clemons' sax came floating out into the frigid boardwalk air, there was no mistaking who was inside.

When longtime E Street keyboardist Danny Federici died in 2008, after a three-year illness, there was no question the band would go on. Charlie Giordano, a veteran musician, had already been filling in for Federici on much of the tour. At a memorial service for Federici, Springsteen's eulogy ended with a reference to the "heart breakin', soul cryin'… and, yes, death defyin' legendary E Street Band.”

In a statement yesterday about Clemons' death, Springsteen again indicated the band will continue. "With Clarence at my side, my band and I were able to tell a story far deeper than those simply contained in our music," he wrote. "His life, his memory, and his love will live on in that story and in our band."

But is there an E Street Band without Clarence Clemons, without his presence, his commanding solos that are so much a part of Springsteen’s music? It's hard to imagine anyone else playing the epic sax solo at the heart of "Jungleland," and it's hard to picture the band on stage at all, without Clemons up there with them.

When he was inducted into the Rock and Roll Hall of Fame in 1999, Springsteen singled out Clemons at the close of his speech. "You want to be like him but you can't," Springsteen said. "The night I met Clarence, he got up on stage (and) a sound came out of his horn that seemed to rattle the glasses behind the bar, and threatened to blow out the back wall. ... But there was something else, something that happened when we stood side by side. Some energy, some unspoken story. ... He always lifted me up. Way, way up. Together we told a story of the possibilities of friendship, a story older than the ones that I was writing, and a story I could never have told without him at my side. I want to thank you, Big Man, and I love you so much."

The Big Man's sound lives on, on record and in 30-plus years of fan-shared live shows now available on the internet. But the E Street Band will never be the same. Neither will Bruce Springsteen. And neither will I.


Wallace Stroby is a lifelong resident of the Jersey Shore, and author of the novels "Cold Shot to the Heart," "Gone 'Til November," "The Heartbreak Lounge," and "The Barbed-Wire Kiss."

Wallace Stroby is a lifelong resident of the Jersey Shore, and author of the novels "Cold Shot to the Heart," "Gone 'Til November," "The Heartbreak Lounge," and "The Barbed-Wire Kiss."