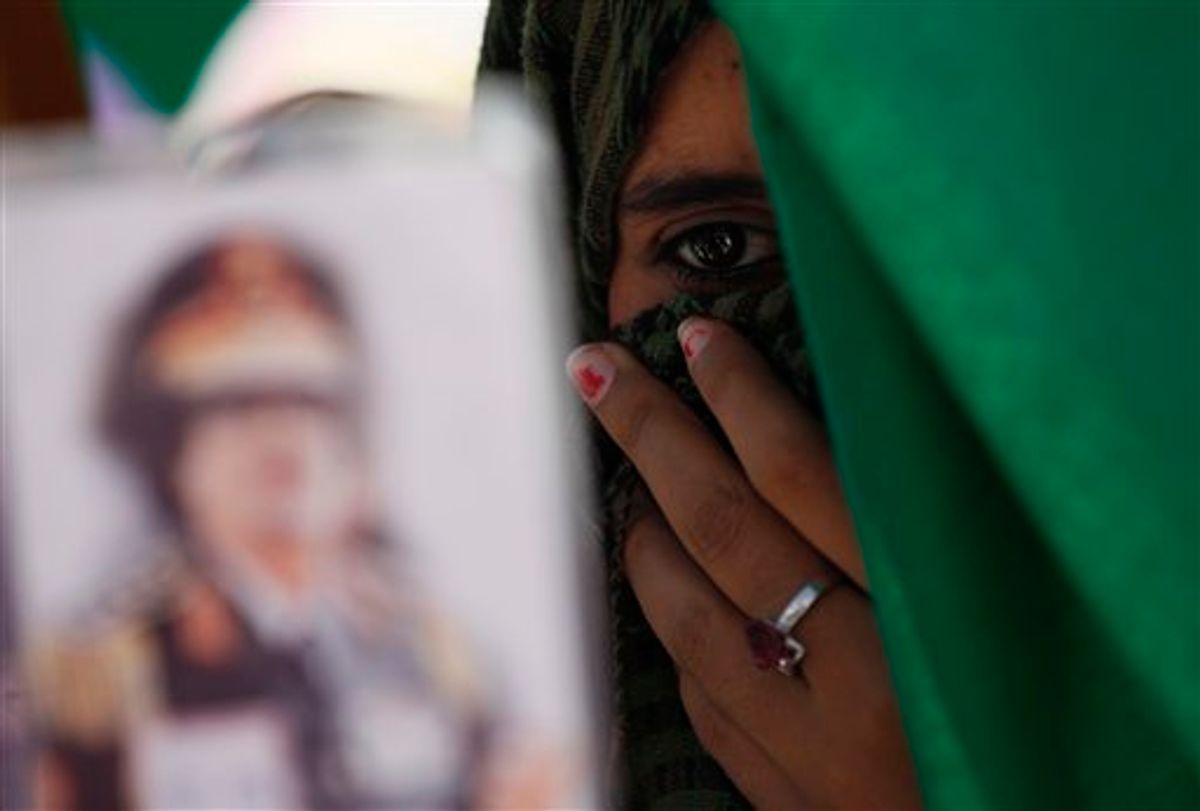 In this photo taken on a government-organized tourm a Libyan student holds a portrait of Libyan leader Moammar Gadhafi, outside the damaged university building in Tripoli, Libya, on Saturday, June 18, 2011. Libyan officials claim that one of the buildings at the university complex was recently hit by a NATO airstrike. (AP Photo/Ivan Sekretarev) (AP)
--

The Libyan government accused NATO of bombing a residential neighborhood in the capital and killing civilians early Sunday, adding to its charges that the alliance is striking nonmilitary targets. At least four people, including two children, were reported killed.

It was not possible to independently verify the government's account of what happened and NATO said it was investigating. The alliance has repeatedly insisted it tries to avoid killing civilians.

Whether they are eventually confirmed or not, the allegations are likely to provide supporters of Moammar Gadhafi's regime a fresh rallying point against the international intervention in Libya's civil war.

Shortly after the strikes early Sunday, journalists based in the Libyan capital were rushed by government officials to the destroyed building, which appeared to have been partially under construction.

Government spokesman Moussa Ibrahim wasn't immediately able to provide the number of casualties, but said there were no military facilities anywhere near the damaged building.

Journalists at the scene were later taken to a hospital, where they were shown at least four people said to have been killed in the strike, including the two young children. Foreign reporters in Tripoli are not allowed to travel and report freely and are almost always shadowed by government minders.

"There was intentional and deliberate targeting of the civilian houses," said deputy foreign minister Khaled Kaim during a visit to the site shortly after reporters arrived. "This is another sign of the brutality of the West."

Libya's Health Ministry says 856 civilians have been killed in NATO airstrikes since they began in March. The figure could not be independently confirmed. Previous government tolls from individual strikes have proven to be exaggerated.

A NATO mission spokesman in Naples, who spoke on condition of anonymity in line with alliance regulations, said Sunday that NATO is aware of the reports regarding Sunday's strikes and is investigating. But he said NATO does not immediately know where in Tripoli the alleged bombing occurred.

The Gadhafi regime has made false claims in the past about NATO having caused civilian deaths, the spokesman added.

While NATO warplanes have stepped up their air campaign against Gadhafi's regime over the past week, fighting has intensified between rebels and government troops outside the port city of Misrata, the main rebel stronghold in western Libya.

For weeks, the rebels had been bottled up in Misrata, some 125 miles (200 kilometers) east of Tripoli. The eastern third of the country is under rebel control from their de facto capital, Benghazi.

On Sunday, Gadhafi's forces unleashed a heavy barrage of Grad rockets and mortars on the rebel front lines in Dafniya, about 15 miles (25 kilometers) west of Misrata. Muthana Issa, an official at Misrata's Hikma hospital said four people had been killed and 16 wounded in the early hours of the bombardment.

As the barrage continued into the afternoon, a steady stream of pickup trucks rushed the wounded to a field hospital in Dafniya, where medics and volunteers quickly unloaded the dead from the back of the pickups and placed the wounded on stretchers. One truck pulled up with three dead bodies covered in blood.

"They are shelling us really badly today with everything -- mortars, grads, heat-sensing weapons, anything you can imagine," said Mustafa, 30, who was helping drive the wounded from the front.

Doctors at the field hospital said they had stopped counting the wounded coming in because there were too many.

Gadhafi's forces also ambushed a group of rebels near Dafniya early Sunday with AK-47s and heavy machine guns, according to rebel fighter Mohammed Khalil. He said the fighting was intense, with the two sides as close as 50 meters from each other. Five rebels were killed in the ambush, he said.

Late on Saturday, NATO announced that it had mistakenly struck a column of Libyan rebel vehicles in an airstrike near an eastern oil town two days earlier and expressed regret for any casualties that might have resulted.

The alliance has accidentally hit rebel forces before in its air campaign to protect civilians in the civil war between Gadhafi's military and the fighters trying to end his more than four decades in power.

A coalition including France, Britain and the United States launched the first strikes against Gadhafi's forces under a United Nations resolution to protect civilians on March 19. NATO, which is joined by a number of Arab allies, assumed control of the air campaign over Libya on March 31.