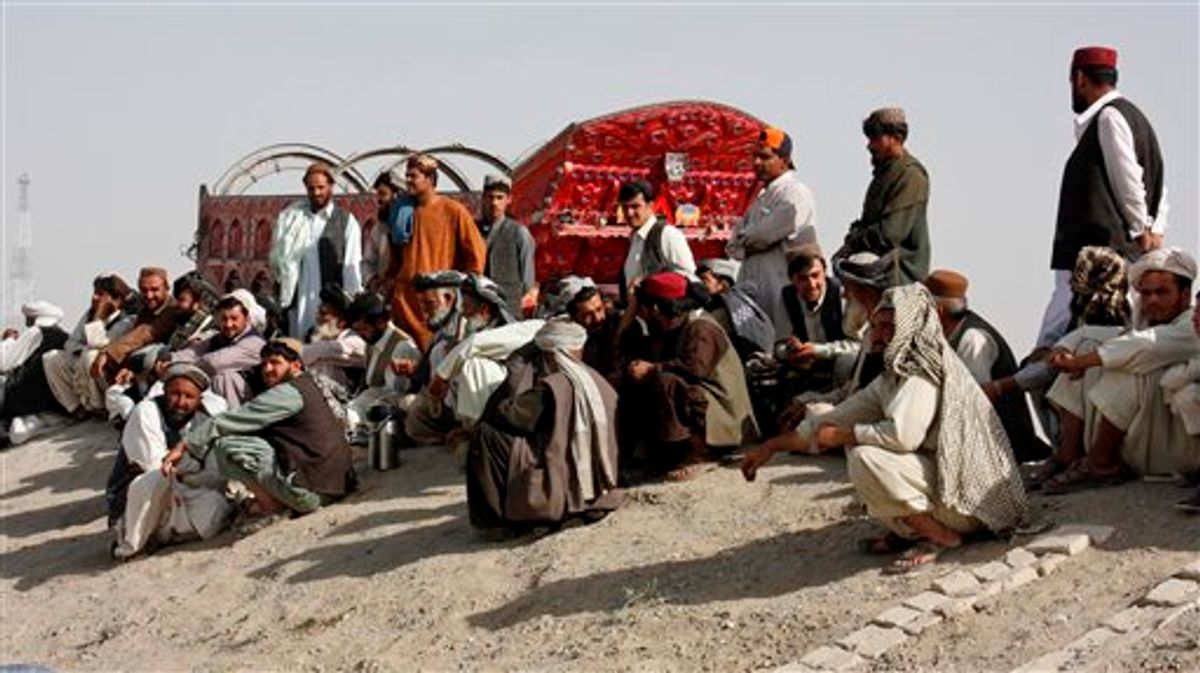 Pakistani truck drivers wait to cross the border to neighboring Afghanistan at the Pakistani border post in Chaman, Friday, June 17, 2011. About 300 Pakistani tribesmen briefly blocked NATO supplies and other traffic at a crossing along the border with Afghanistan on Friday to protest an alleged shooting incident, officials said. (AP Photo/Shah Khalid) (AP)
--

In another blow to Washington's relationship with Pakistan, U.S. officials say Pakistan failed another test to prove it could be trusted to go after American enemies on its soil by intentionally or inadvertently tipping off militants at two more bomb-building factories in its tribal areas, giving the suspected terrorists time to flee.

The two sites' locations in the tribal areas had been shared with the Pakistani government this past week, the officials said Saturday. The Americans monitored the area with satellite and unmanned drones to see what would happen.

In each case, within a day or so after sharing the information, they watched the militants depart, taking any weapons or bomb-making materials with them, just as militants had done the first two times. Only then, did they watch the Pakistani military visit each site, when the terror suspects and their wares were long gone, the officials said, speaking on condition of anonymity to discuss matters of intelligence.

The Americans suspect that either lower-level Pakistani officials are directly tipping the militants off to the imminent raids, or the tips are coming through the local tribal elders that Pakistan insists on informing of the raids. U.S. officials have pushed for Pakistan to keep the location of such targets secret prior to the operations, but the Pakistanis say their troops cannot enter the lawless regions without giving the locals notice.

The latest incidents bring to a total of four bomb-making sites that the U.S. has shared with Pakistan only to have the terrorist suspects flee before the Pakistani military arrive. Both sides are attempting to mend relations and rebuild trust after the U.S. raid on May 2 that killed Osama bin Laden in Abbottabad, a Pakistani army town only 35 miles from the capital Islamabad.

The Pakistanis believe the Americans violated their sovereignty by keeping them in the dark about the raid. American officials believe bin Laden's location proves some elements of the Pakistani army or intelligence service helped hide the al-Qaida mastermind.

Pakistan's army on Friday disputed reports that its security forces had tipped off insurgents at bomb-making factories after getting intelligence about the sites from the United States. The army called the assertions of collusion with militants "totally false and malicious."

Pakistani army officials claimed they had successfully raided two more sites, after finding nothing at the first two, but a Pakistani official reached Friday offered no details of what they found.

That official admitted that in each raid, however, the Pakistani security services notified the local elders who hold sway in the tribal regions. The official said they would investigate U.S. charges that the militants had been tipped off.

Two U.S. officials said they were asking the Pakistanis to withhold such sensitive information from the elders, and even their lower ranks, to carry out their raids in secret, to prove they could be trusted to go after U.S. enemies.

At least two of the sites were run by the Haqqani network, which is part of the Taliban, closely allied with al-Qaida, and blamed for some of the deadliest attacks against U.S. troops and civilians in neighboring Afghanistan. Pakistan has long resisted attacking the Haqqani network, saying the group has never attacked the state of Pakistan.

The intelligence sharing was intended as a precursor to building a new joint intelligence team of CIA officers together with Pakistani intelligence agents. But U.S. officials say Pakistan has failed to quickly approve the visas needed, despite agreeing to form the team in May.

U.S. officials have also accused Pakistan of holding up to five Pakistani nationals accused of helping the CIA spy on the Abbottabad compound in advance of the bin Laden raid.

Pakistan's ambassador to the U.S., Husain Haqqani, confirmed Sunday that Pakistan had rounded up more than 30 people as part of the investigation. He said they were being questioned for information, not punished, but did not say what would happen to them if charged and found guilty of spying.

Speaking on ABC's "This Week," Haqqani said if any among them were informants who worked for the CIA, "we will deal with them as we would deal with an offending intelligence service and we will resolve this to the satisfaction of our friends, as well as to our own laws."