Could flogging solve our prison crisis?

One expert argues that the whip is a more humane punishment than our overcrowded jails. We ask him why 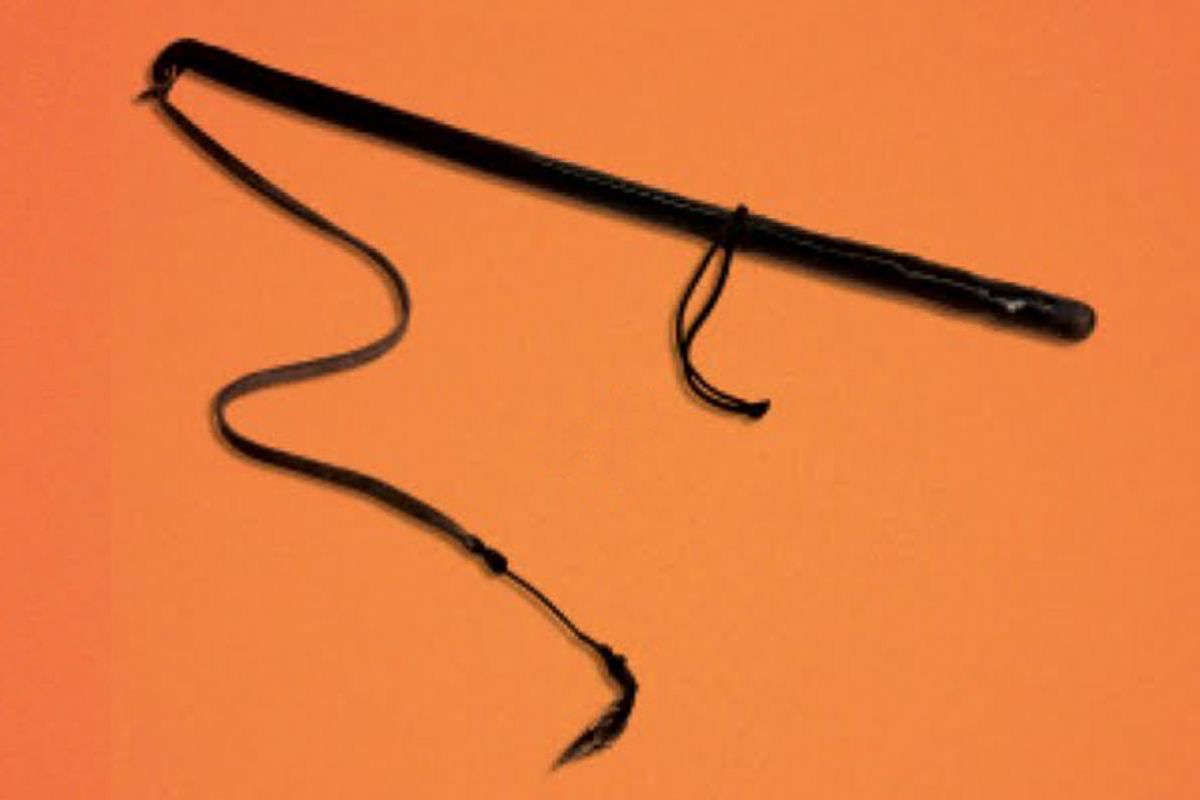 America's prison system is in a state of crisis. Since the declaration of a war on drugs 40 years ago, our country has amassed the largest prison population the world has ever seen. Overcrowding and unconstitutional conditions have gotten so bad that one of the worst offenders, California, was recently ordered by the U.S. Supreme Court to either transfer 33,000 people to other jurisdictions or simply let them go. Now former police officer turned criminal justice professor Peter Moskos has devised a modest proposal that, he argues, could solve the problem of our congested prisons overnight: give prisoners the option of being flogged instead of being imprisoned.

Moskos makes a compelling 154-page argument in flogging’s favor. He points out that since physical brutality is already a part of prison life -- for example, 1 in 20 prisoners report having been sexually assaulted by other inmates or staff in the past year -- and corporal punishment is a much faster and cheaper method of retribution, prison may actually be the more inhumane and less fiscally responsible option. Although his outrageous idea may conjure up unsavory reminders of U.S. slavery, by the end of "In Defense of Flogging," Moskos might just have you convinced.

Salon spoke with Moskos about the feasibility of flogging, the reasons behind our prison population explosion -- and why so many Americans want to see prisoners suffer.

The first reaction people seem to have to the premise of your book is: "Is this guy for real?" So, are you?

Yes, I am for real. People have to read beyond the title of the book because I’m not actually pro-flogging; however, I am entirely serious about my belief to offer it as a choice instead of prison. I was much more hesitant when I started working on the book, but as I did my research and writing, I succeeded in convincing myself!

I think flogging is evil, but it’s the lesser evil of the two. I think it’s strange for people to say that even though flogging might be better than prison, we still can’t do it because it’s bad. That’s not much of an argument. I always try to keep the focus on prison because that’s really what the book is about. But flogging is essential on a huckster level to get the book noticed. If I had written a book called "Why Prisons?" nobody would read it. I already wrote a book calling for drug legalization and no one read that one.

Many people will find the brutality of flogging horrifying, and some may even think it's torture, but you argue that prison is a worse, dishonest punishment.

Flogging should horrify people. But taking away a significant chunk of someone’s life is far worse than any punishment that is virtually instantaneous. We should be honest about prison and recognize that we’re sentencing people to years of confinement and torture. But we don’t do that. We still have this hogwash about prison being good for the soul. Deep down I think we all understand that no one leaves prison in a better position than they went in.

Also, prison has physical and sexual abuse. It’s so bizarre that we’ve gotten to a point where we consider prison normal and think it’s OK to imprison 2.3 million people. The U.S. has more prisoners than China, and they have a billion more people than we do. America is running an experiment in incarceration that has never happened in the world before, and to our own detriment.

A big part of my argument rests on the idea that flogging would be a choice, not imposed, because consenting to the flog takes away much of the protest that it’s cruel and barbaric. If flogging were such a bad choice, nobody would choose it.

Is flogging letting people off too easily?

Usually when I talk to liberals, they start by saying it’s horrible. Then I compare it to prison and they decide it’s not enough. It can be either too hard or too soft, but it can’t be both. If our society has gotten to the point where whipping somebody is considered too lenient then what have we become? Flogging is cruel and barbaric, so I would hope that would be punishment enough.

How did the U.S. become the most heavily incarcerating country in the world?

The War on Drugs is the short answer. The increase has happened since 1970, and if it weren’t for widespread drug policy changes that created longer sentences and "get tough" laws of three strikes and you’re out, I don’t think we’d have massive incarceration. Since we don’t have alternatives, all we can do is add more years. That’s how we went from having normal levels of incarceration to seven times the normal rate.

If prisons are so terrible and ineffective, why do they persist?

Mostly because people won’t think outside the box, but also because a lot of people still believe prisons can be reformed in some magical way that make them good for prisoners. I don’t buy that for a second. There’s also a strong desire for punishment and retribution, and that’s not necessarily bad if it’s kept in check.

It’s much harder to attack prisons now than ever before because so many people make money off of them -- whether it's people employed by prisons or the private companies that own them. People who are pro-prison don’t hide the fact that their goal is to create jobs, which, to me, is a morality issue. You cannot have a jobs program based on human bondage. When people say flogging is reminiscent of slavery -- which it is -- I tell them that prisons are the true descendant because we really do lock black and Hispanic people up so other people can make money off of them. The CEO of The Corrections Corporation of America essentially said that if we criminalize more people then we’ll have to house them somewhere. They’re just so open about it.

What effect does 2.3 million prisoners have on U.S. society?

Prisons cost us a lot of money, which is a big problem now with all the budget crises. If California could return to its 1970 level of incarceration, they would reduce their budget deficit by 50 percent. In that sense, it’s real money.

Additionally, the burden is excessively on the poor. A lot of people, myself included, don’t personally know anybody in prison. Yet when I talk to students at the public university where I teach, a lot of them can’t imagine not knowing anyone in prison. The people locked up are almost always poor, and usually they’re black. This goes back to the War on Drugs, disproportionate arrest rates, and not having the money to hire a lawyer who can keep you out of prison.

And the people who suffer aren’t just the prisoners themselves.

It’s no surprise that kids who grow up with incarcerated parents don’t do as well, because even criminals can be half-decent parents. It’s certainly better than no parent, which is the case for the 1.5 million children in this country who have a parent in prison. Losing someone who can provide for your family makes it harder to escape poverty, and then you’re more likely to end up in prison yourself.

There’s a tipping point where incarcerating too many people makes it impossible for the community to function. When you remove so many potential workers, communities break down. Most people who are released end up back in prison. In part that’s because they aren’t able to find legitimate jobs and end up committing crime to get money. In that sense, a vicious cycle is created.

If we simply gave people the money we spend on locking them up, I’m sure most would stay out of prison. Some might say they aren’t morally deserving, but I don’t really care about that. If it’s cheaper and prevents crime, I’m all for handing out money so that people can stay out of trouble. Anyway, eventually they’re all released, and since we don’t want them to commit more crimes, it’s in our selfish best interest to help them.

If a radical overhaul of the prison system is the goal, why not offer solutions in that vein instead of advocating for something most Americans will find abhorrent?

I wanted to throw a hand grenade into this debate because I don’t really see it going anywhere. My argument is a sort of old progressive call for prison abolition that is wrapped in a punitive conservative façade. I have a lot of friends who don’t support the prison system, but not supporting it isn’t enough. We must figure out alternatives because it’s not getting better just by talking about it. Prison reform has been advocated for decades and the movement has failed. No one’s listening to them. I’m all for finding a third way, but it’s too naive to keep waiting for the perfect solution. I don’t expect to see flogging implemented any time soon, and I’d be a bit unsettled if it were, but if the trade-off is significantly reducing our prison population, then let's do it.

Could fines be effective?

For some people, but not for most because most people in prison are poor and get locked up precisely because they have no money. Fining would be a good solution in theory, but it just does not prove effective in real life. Also, America is a punitive society. Most supporters of the death penalty recognize it doesn’t deter crime, which is fascinating because that perspective is purely retributive. So, you can’t discount mainstream values.

What about prison as rehabilitation?

I’m skeptical of rehabilitation because of its religious and paternalistically based origins, which assume there are genetically inferior classes and that it’s our obligation to help them. That idea has done a lot of bad in this world. Also, rehabilitation implies there’s something to rehabilitate to, that someone simply took the wrong path and needs to correct it, but if you grow up in poverty then that’s the only culture you know. So, working with someone isn’t rehabilitating them; it’s educating them on how to conform to prized social norms. And if we want that to have any chance of success, we have to separate that process from incarceration.

You say prison reform simply creates an "improved system of evil." What steps should the government take to solve the prison problem?

Everything from sentencing reform and alternative sentencing to drug courts to re-entry programs to better policing to policies that reduce poverty. All those things are needed. The problem is that these kinds of programs are the first to have their funding taken away in tight budget times.

What would you think about America if people began advocating flogging?

Some Americans might advocate for whipping people, but I’m not one of those. I think it’s about giving people a choice of punishment, and hopefully there would be some other choices out there. It’d be nice if more people would advocate for a different drug policy. As politically unfeasible as advocating for legalizing drugs may be right now, it’s probably the most likely option that would happen. The past 10 years have shown a big change in that debate. It used to be completely taboo to talk about it and now medicinal marijuana is up for referendum in some states. That’s the biggest practical step people should fight for because drug prohibition is really the root of most of the evils in the prison system.