Could the 22-year-old's record-breaking performance mean we finally stop caring about Tiger Woods? 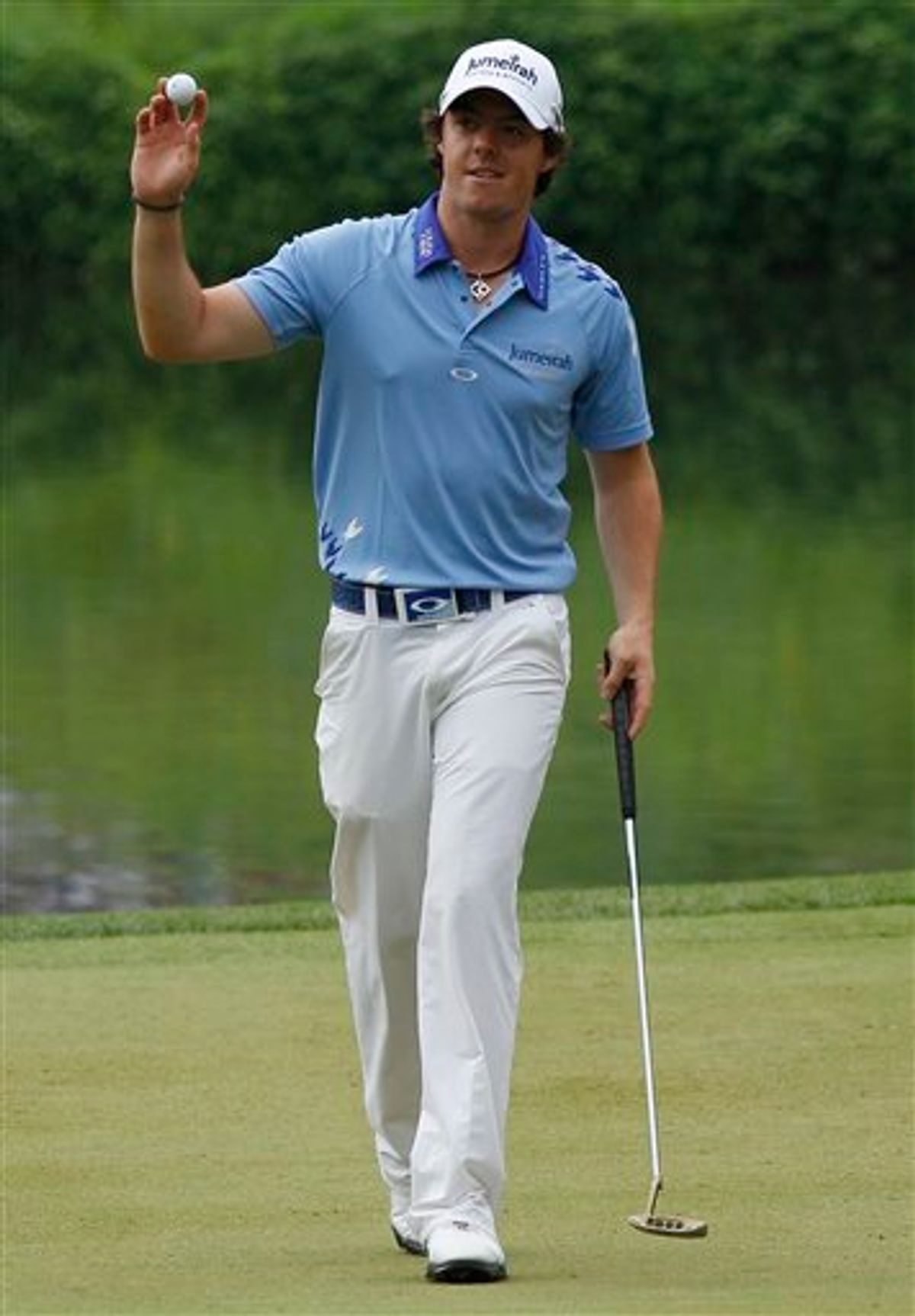 Rory McIlroy, Northern Ireland, waves to the gallery on the 10th green during the final round of the U.S. Open Championship golf tournament in Bethesda, Md., Sunday, June 19, 2011. (AP Photo/Matt Slocum) (AP)
--

The lead was 10 following yet another birdie as Rory McIlroy walked off the fourth green and handed his Titleist to a tousle-haired teen watching from just beyond the ropes at Congressional.

A nice souvenir for the kid, who may one day dream of having a future in golf. And appropriate that it was given to him by the kid who may be the future of golf.

His romp in the park at the U.S. Open didn't just make McIlroy a major champion for the first time at a younger age than the great Jack Nicklaus. It also announced the arrival of a player so talented and magnetic that golf may stop caring so much about Tiger Woods.

The 37,000 people who lined the fairways and surrounded the greens on a steamy Sunday seemed to sense that. They cheered every shot, even though the little drama that remained evaporated when McIlroy birdied the first hole to let everyone know this was not the Masters and there would be no meltdown.

A few youngsters even climbed trees to get a better look, straining to see the 22-year-old turn their national championship into a rout eerily similar to the one turned in by another young phenom in 2000 -- a performance no one thought could be repeated. The final round was nothing more than a victory lap for McIlroy, a chance to soak in the adulation and post some numbers that made the people who run the Open cringe.

If not for an 80 in the final round of the Masters, he would be halfway to the Grand Slam.

And, if you want to know what kind of person he is, the first thing he did afterward was thank his mother and father for making it all possible.

All of a sudden does it really matter if Woods is playing in the British Open?

"This guy is the best I've ever seen, simple as that," said Graeme McDowell, who won last year's Open at Pebble Beach. "He's great for golf. He's a breath of fresh air for the game and perhaps we're ready for golf's next superstar and maybe Rory is it."

With Woods now damaged goods, golf is in desperate need of a new star and the youngster from Holywood, Northern Ireland, couldn't be more perfect if he came from central casting in Hollywood, Calif.

He's a fresh face under a mop of hair, so disarmingly candid you wonder if he got the memo that athletes aren't really supposed to say what they think. In the wake of his final round debacle at the Masters, he had to teach himself to play with a certain arrogance, mostly because off the course his personality is best suited for having a pint with his friends at the neighborhood pub.

His game is even more enticing. McIlroy drives the ball so long and straight that his fellow pros stop to watch, his iron play is meticulous, and he's now figuring out a way to get the ball in the hole with his putter on a more consistent basis.

He's on the verge of greatness now. But he only figures to get better.

"My impression is that he hasn't primed yet," said Y.E. Yang, who played with McIlroy on the weekend. "There's still a lot more for him to grow. I think he's still growing, and it's just scary to think about it."

Scarier still may be that McIlroy has Woods in his sights. At least he did on this day, fully aware of the history that came before.

Consider that done. But also consider what McIlroy did for himself by bouncing back from bitter disappointment at Augusta National to win the kind of Open that golf historians will be talking about for generations.

He called his father in Northern Ireland just 20 minutes after losing a four-shot lead in the final round of the Masters to tell him he was OK and that it was all part of golf. Then he told reporters for weeks that he had gotten over his failure and would bounce back.

If we didn't believe him then, we do now.

For the supremely talented, winning the first major championship is almost always as much about relief as it joy. Once the burden of expectations is lifted, the wins tend to come more easily.

Expect them to come quickly for McIlroy.

"After the Masters and after winning this, I think he'll just go on, go in leaps and bounds," his father, Gerry, said. "He should do well, you know, and he's keen to do well. He'll keep working, if I know Rory."

McIlroy himself believes they may come sooner than later.

First, though, he had more immediate plans. With the Open trophy securely in his hands, there was some celebrating to do, and surely a beverage or two would be sipped from it before the night was through.

Golf should raise a toast to its newest star, too.

Because the future of the game is looking good.

Tim Dahlberg is a national sports columnist for The Associated Press. Write to him at tdahlberg(at)ap.org or http://twitter.com/timdahlberg