The triumph of business-class America

Corporate executives grab an ever bigger piece of the pie, with government help. How long can this go on? 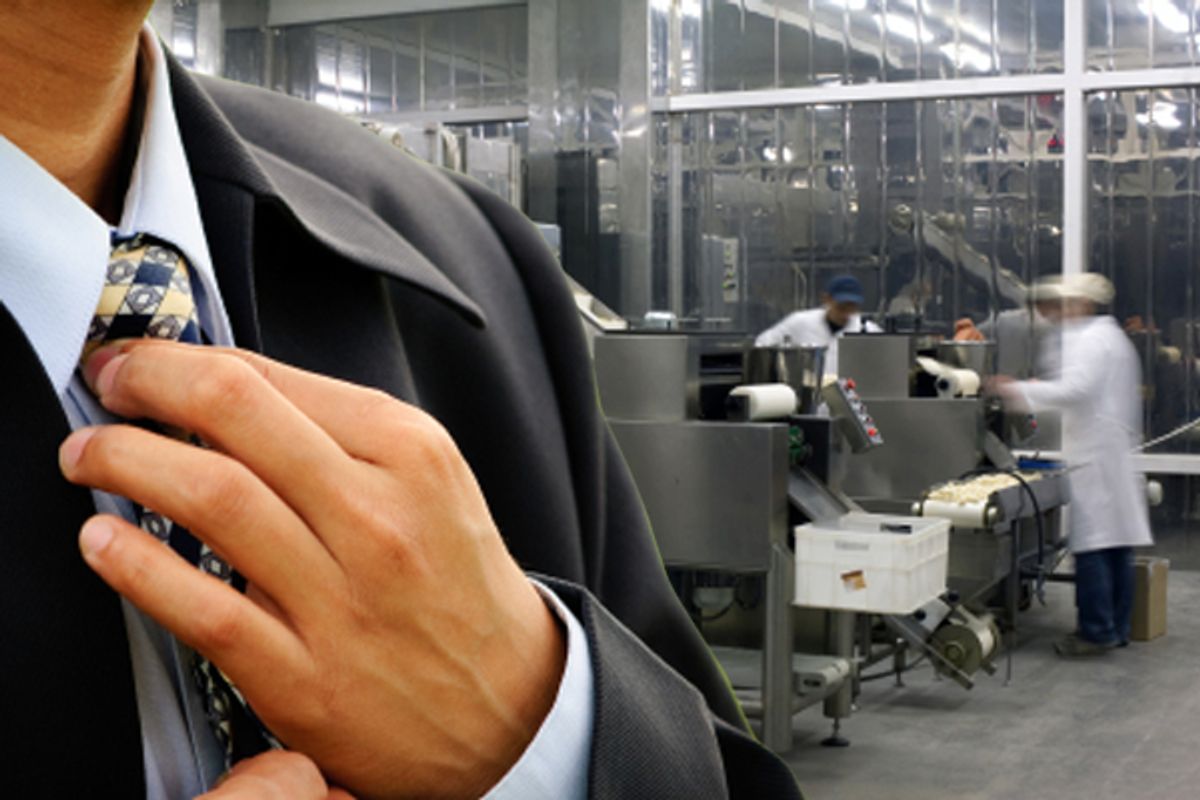 The fact that income inequality is growing in the United States can hardly be considered breaking news in 2011, but that doesn't mean we shouldn't appreciate every new effort to shine a light on the distressing phenomenon. The best part of the Washington Post's detailed new report on how the rich are getting richer, while the rest of us flounder comes at the end: "This is the first in an occasional series." That's good news: The growing concentration of wealth among the richest Americans is one of the most important stories that reporters attempting to explain where the United States is headed in the 21st century can cover.

The key contribution made by the Post's Peter Whoriskey is to pinpoint exactly who is making all the money.

...[A] mounting body of economic research indicates that the rise in pay for company executives is a critical feature in the widening income gap... The largest single chunk of the highest-income earners, it turns out, are executives and other managers in firms, according to a landmark analysis of tax returns by economists Jon Bakija, Adam Cole and Bradley T. Heim...

Other recent research, moreover, indicates that executive compensation at the nation's largest firms has roughly quadrupled in real terms since the 1970s, even as pay for 90 percent of America has stalled...

As many times as the following statistic is repeated, it still jars.

In 1975, for example, the top 0.1 percent of earners garnered about 2.5 percent of the nation's income, including capital gains, according to data collected by University of California economist Emmanuel Saez. By 2008, that share had quadrupled and stood at 10.4 percent.

So what else has happened over that same period of time? Well, for starters, even as the top 0.1 percent of earners has grabbed an ever-bigger share of the nation's income, they have seen their taxes steadily fall -- and, judging by the campaign platforms of Republican presidential candidates, one of our nation's two biggest political parties is committed to seeing that their taxes drop even further.

The political consequences of that fact deserve another continuing series from the Washington Post. It's bad enough that the vast majority of Americans are mired in income stagnation, or even falling backward. But perhaps even more troubling is how the concentration of wealth in the executive class has been mirrored by a concentration of political power employed to serve the interests of that class. Keeping taxes low on the wealthy has become a higher priority than funding the kinds of social welfare safety net programs that would at least partially compensate working-class Americans for their failure to keep pace with the gains enjoyed by the richest Americans. Supreme Court decisions now routinely favor business-class priorities. Eager to keep the corporate campaign finance contributions flowing, both Democrats and Republicans strive to keep regulation as light as possible on corporate America.

The most baffling part of all of this is that, according to the Post, the majority of Americans think that the change in income disparity is "unfair." Put that together with polling that indicates that Americans support higher taxes on the rich, and you end up with a mystery. Why isn't the American political system responding to the will of the majority? When is this levee going to break?