Does former Utah governor Jon Huntsman have an economic platform? If so, why won't he tell us what it is? 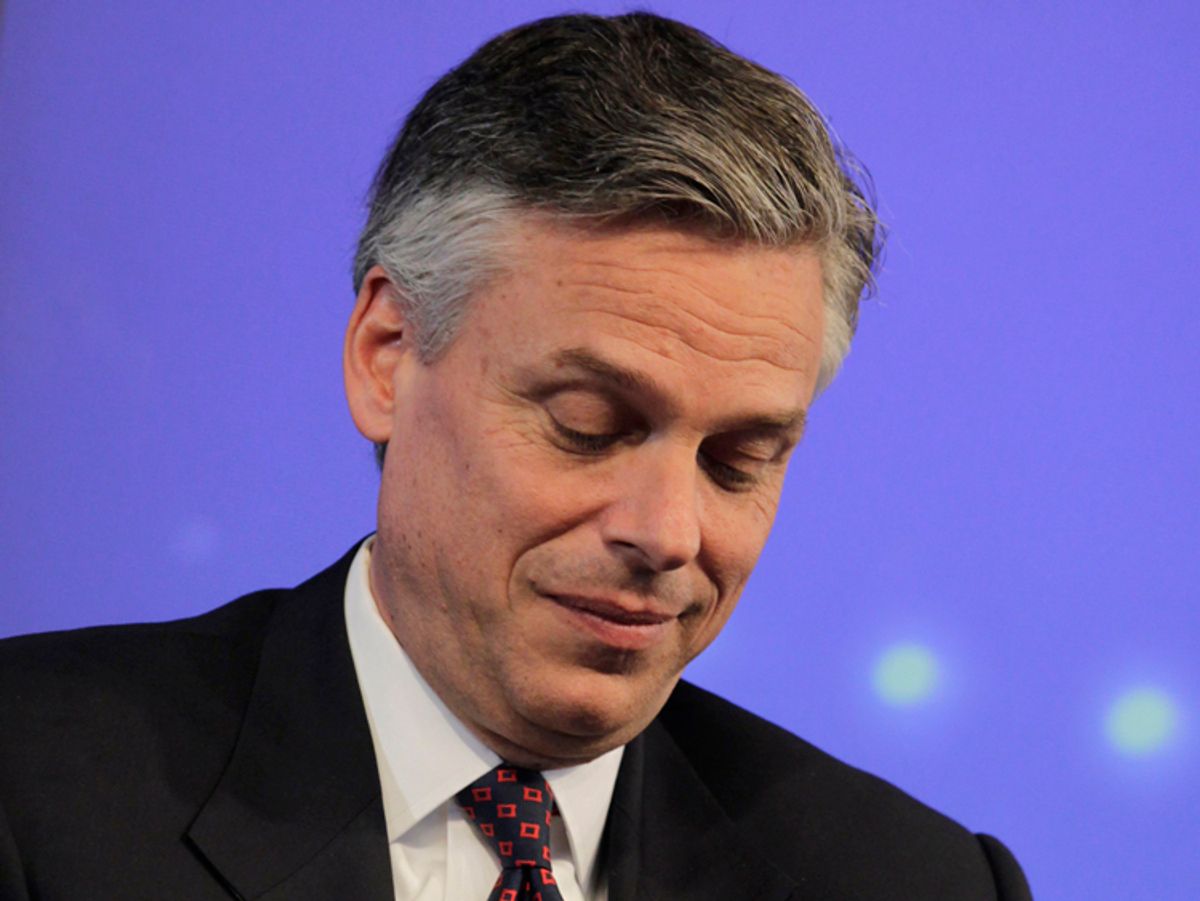 What does it mean to be a GOP "moderate?" I had hoped to gain some insight into this question by reading The New York Times' Sunday Magazine profile of former Utah governor and present Republican presidential candidate Jon Huntsman -- a man rumored to linger a few steps closer to the American center than your average GOP contender for the White House. But I should have been warned off by the teaser: "Someone has to win the nomination. It might as well be Jon Huntsman." Last I checked, "might-as-well" doesn't win many primaries.

Reporter Matt Bai manages to deliver more than 6000 words on Huntsman without providing a single practical reason why anyone, Republican, Democrat, or Independent, might possibly consider voting for him. Whether this is because Bai simply isn't interested in actual positions on the issues or because Huntsman just doesn't have a platform to campaign on -- or some evil toxic combination of both -- is hard to say. But the result is just plain baffling. Bai quotes Huntsman as saying "I think what's going to drive this election, really, are two things -- authenticity and the economy" -- and then proceeds to write a profile that doesn't contain a single iota of insight into Huntsman's views on any economic policy issue.

6000 words -- and not a single one of them is "jobs" or "taxes" or "budget" or "deficit" or "Wall Street." This amounts to political reporting malpractice. If Huntsman isn't interested in delineating a stance on these issues, then why is Bai bothering to cover him? And if Bai isn't interested in trying to discern what Huntsman's stance is, why is the New York Times publishing him?

A cynic might suspect that the real reason why we are not hearing any details on Huntsman's economic policy views might have something to do with the fact that almost by definition a Republican "moderate" would line up pretty closely to where the White House has been standing all along. Moderates, presumably, aren't gung ho to cut even bigger tax breaks to the richest Americans and might entertain the notion of more aggressive government action on job creation. But that kind of wild socialism is not going to fly in 2012, no matter how handsome the candidate. The matter is further complicated when we learn -- although not from Matt Bai! -- that Huntsman has fully endorsed Paul Ryan's budget, and a balanced budget amendment -- the extra-special GOP-style balanced budget, the kind that forbids raising taxes under any circumstances.

Bai tells us that "Huntsman's bet is that some critical mass of moderate Republicans and independents -- and there are still plenty of both in New Hampshire -- can be persuaded to rally around a less ideological candidate who isn't going to get personal or shape-shift, even if they don't love all of his positions." But I'm having some difficult squaring that analysis with Huntsman's support of the Ryan budget, which continues to lower taxes on the rich while slashing away at Medicare and Medicaid, or his endorsement of a balanced budget budget that would force even greater cuts in government spending. Not even Ryan's budget, after all, achieves the goal of balancing the budget. To accomplish such a task without increasing revenue would represent a reduction in government spending that could never, under any circumstances, be described as "moderate."

Ultimately, by not managing to communicate anything remotely useful about Jon Huntsman, Matt Bai paradoxically does end up telling us something valuable: there's a reason why the Utah governor can't articulate his views on the economy: you can't be a moderate and advocate radical legislation, because you can't steer to the center without looking a lot like Obama.

2012 Elections How The World Works