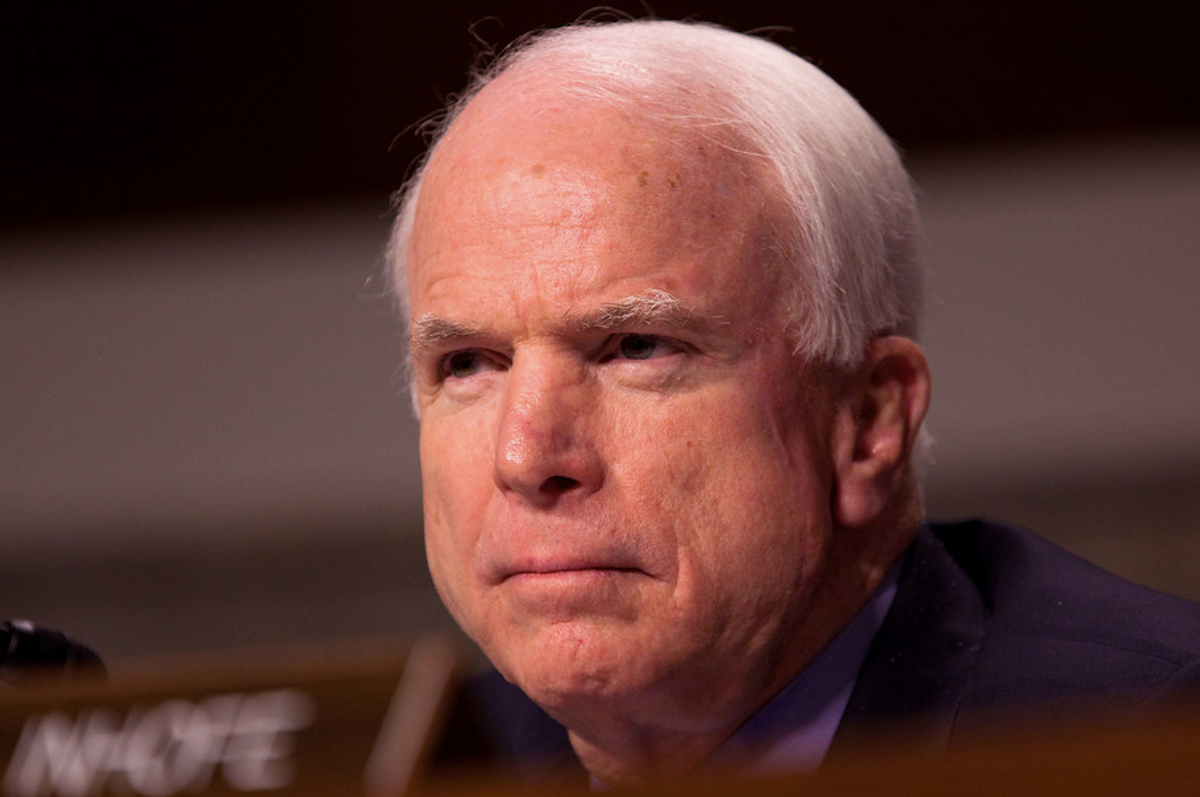 (UPDATED) A number of devastating wildfires have consumed hundreds of thousands of acres of land in Arizona in recent weeks. When Sen. John McCain was asked about the situation at a news conference over the weekend, he placed the blame for some of the fires on illegal immigrants -- a claim that has drawn intense criticism from Latino civil rights advocates. Here's what he said:

First of all we are concerned particularly about areas down on the border where there is substantial evidence that some of these fires are caused by people who have crossed our border illegally. They have set fires because they want to signal others; they have set fires to keep warm; and they have set fires in order to divert law enforcement agents and agencies from them. So the answer to that part of the problem is: get a secure border.

McCain did not detail the "substantial evidence" for his claim, so I inquired about it with his spokeswoman, Brooke Buchanan. She told me in an email Sunday that the senator "was given the information by a Forest Service official during his visit to the Wallow fire damaged area on Saturday." (That fire, in the eastern part of Arizona and New Mexico, has burned more than half a million acres.)

A spokesman for the agencies fighting the Wallow fire, however, told ABC that while the fire is believed to be human-caused, he knows of "no evidence" that illegal immigrants were involved.

Buchanan says that McCain wasn't referring to the Wallow fire, but rather some smaller blazes at Coronado National Forest near the U.S.-Mexico border.

She points to comments earlier this month by Jim Upchurch, forest supervisor at Coronado, who told the Arizona Daily Star that closing the forest was necessary because "the great majority, if not all the fires, on the Coronado National Forest (this year) have been human-caused. Causes of fires include ricocheting bullets, campfires, welding equipment and possibly ignition by smugglers or illegal immigrants."

The Star reported a few days after Upchurch's comments that Forest Service officials were saying only that the fires in Coronado were under investigation, not specifically that border crossers were involved. But many locals have nevertheless already placed the blame on immigrants, the Star reported.

Upchurch, with his use of the word "possibly," seemed less certain of the cause of the fires than McCain, who spoke of "substantial evidence" that illegal border crossers had set fires for signaling purposes and the like. In any case, I've reached out to Upchurch to see if he can offer any specifics, and I will update this post if I hear back.

Here is the video of McCain's press conference:

UPDATE: Heidi Schewel, spokeswoman for the Coronado National Forest, gave me this statement when I asked about McCain's claim: "The causes of the fires have not been determined. They are currently under investigation. Until investigations are complete we will not speculate on the causes."

When I asked her about Upchurch's comments earlier this month that immigrants were possibly involved, Schewel said that he was not referring to any specific fire.

Bottom line: what we're hearing from the Coronado forest officials is quite different than McCain's claim of "substantial evidence" of involvement by illegal immigrants. If his office provides any more specifics, I will update this post.