Zine El Abidine Ben Ali, in exile in Saudi Arabia, has been sentenced to 35 years in prison 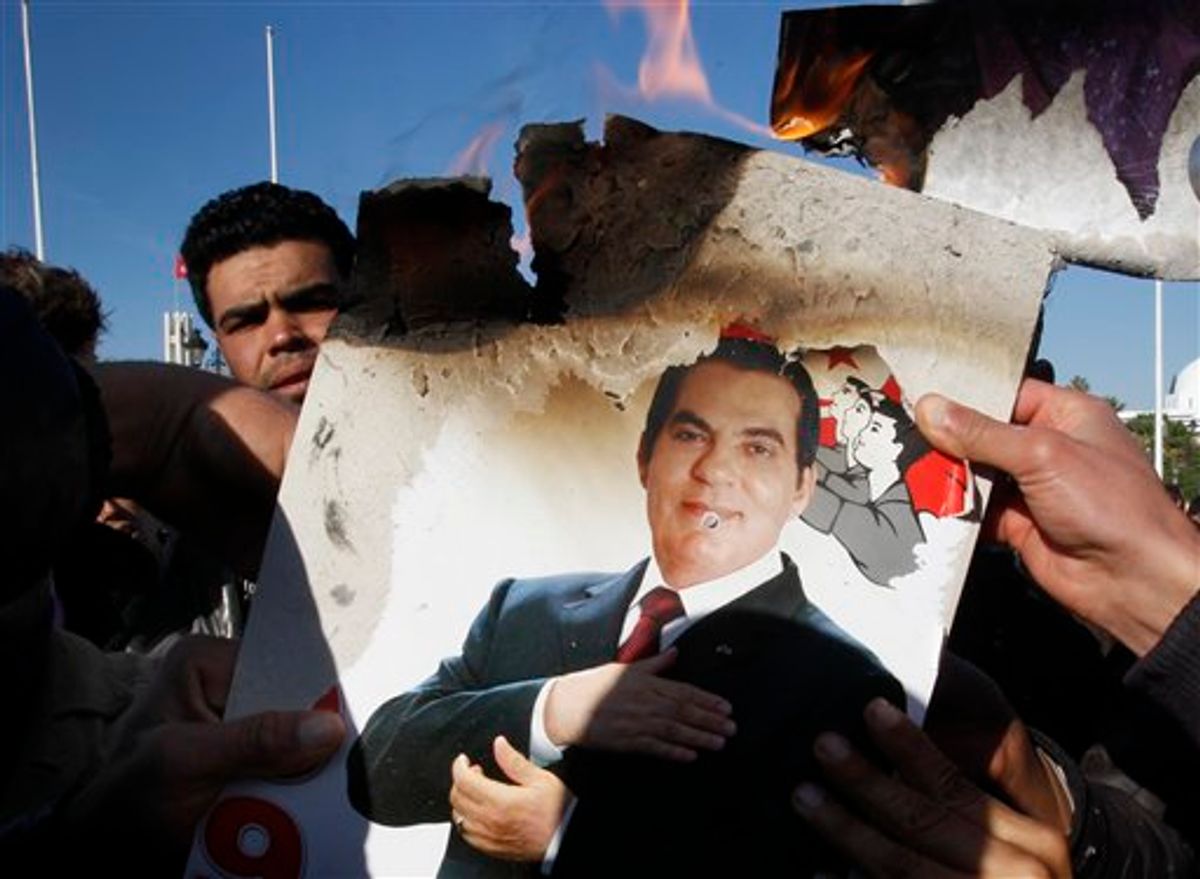 FILE - In this Monday, Jan. 24, 2011 picture, protestors burn a photo of former Tunisian President Zine El Abidine Ben Ali during a demonstration against holdovers from Ben Ali's regime in the interim government in Tunis, Tunisia. Tunisia's former autocratic leader whose downfall triggered uprisings in the Arab world has condemned his upcoming trial in absentia in Tunis as a "shameful masquerade." Ben Ali - in exile in Saudi Arabia - also said Sunday, June 19, 2011 in a statement from his French lawyer that he didn't flBeee Tunisia but left to avoid "fratricidal and deadly confrontations." (AP Photo/Christophe Ena, File) (AP)
--

Tunisia's former ruler and his wife were convicted in absentia on embezzlement and other charges on Monday after $27 million (euro18.97 million) in jewels and public funds were found in one of his palaces.

They were sentenced to 35 years each in prison.

The conviction of Zine El Abidine Ben Ali and Leila Trabelsi followed a day-long trial before the Tunis criminal court. The couple went into exile on Jan. 14 in Saudi Arabia after a month-long uprising that sparked a string of other uprisings in the Arab world.

Ben Ali, 74, vigorously denied the charges in a statement through his French lawyer, calling the proceedings a "shameful masquerade of the justice of the victorious."

Saudi Arabia did not respond to an extradition request, and some Tunisians expressed frustration that he would not be present for his judgment.

Ben Ali and his wife were charged in the discovery of a trove of valuable jewels and cash in Tunisian and foreign currency at a palace in a village north of Tunis. Images of the cache shown on TV after the discovery shocked Tunisians.

A second case stems from the seizure of arms and drugs at the official presidential palace in Carthage during a search by a commission investigating abuse of authority formed after Ben Ali's departure. He faced charges in that case of possessing and trafficking drugs, detention of arms and munitions and failing to declare archaeological works also found at the palace.