We learn what Afghanistan "withdrawal" means; Obama's defenders attack him on Libya; and the Osama killing makes things worse 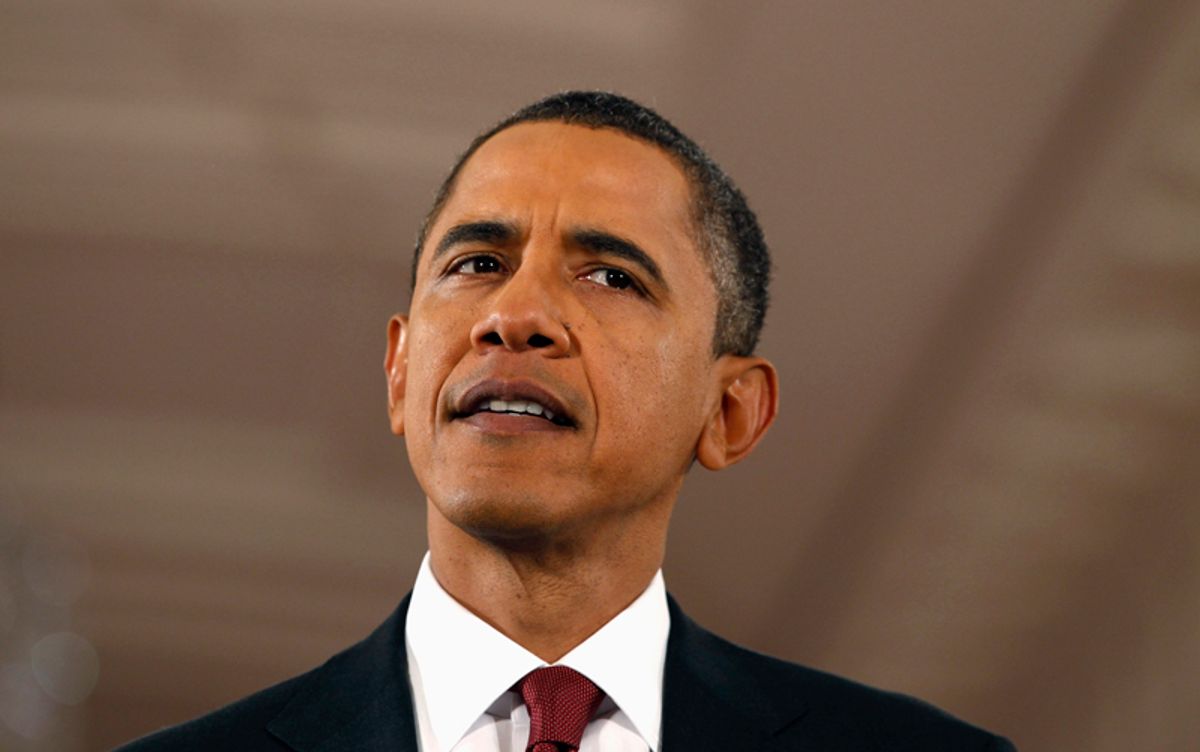 As usual, there are multiple events from just the last 24 hours vividly highlighting the nature of America's ongoing -- and escalating -- posture of Endless War:

(1) In December, 2009, President Obama spoke at West Point and, while announcing his decision to (yet again) deploy more troops to Afghanistan, he assured the nation in a much-heralded vow that "after 18 months, our troops will begin to come home."  He repeated that claim in May, 2010, prompting headlines declaring that Obama has set July, 2011 as the target date for when "withdrawal" from Afghanistan will begin.  Now we're less than two weeks away from that target, and The New York Times today makes clear what "withdrawal" actually means:

President Obama plans to announce his decision on the scale and pace of troop withdrawals from Afghanistan in a speech on Wednesday evening . . . Mr. Obama is considering options that range from a Pentagon-backed proposal to pull out only 5,000 troops this year to an aggressive plan to withdraw within 12 months all 30,000 troops the United States deployed to Afghanistan as part of the surge in December 2009.. . . .

Even after all 30,000 troops are withdrawn, roughly 68,000 troops will remain in Afghanistan, twice the number as when Mr. Obama assumed office.

So even under the most "aggressive" withdrawal plan the President is considering -- one that he and media outlets will undoubtedly tout as a "withdrawal plan" (the headline on the NYT front page today: "Obama to Announce Plans for Afghan Pullout") -- there will still be "twice the number" of American troops in that country as there were when George Bush left office and Obama was inaugurated.  That's what "withdrawal" means in American political parlance: doubling the number of troops fighting a foreign war over the course of four years.

(2) So frivolous and lawless are Obama's excuses for waging war in Libya in violation of the War Powers Resolution that they have provoked incredibly harsh condemnations even from those who typically defend the President.  In The Washington Post today, Eugene Robinson aggressively denounces Obama's arguments for waging war without Congress:

Let’s be honest: President Obama's claim that U.S. military action in Libya doesn’t constitute "hostilities" is nonsense, and Congress is right to call him on it.

Blasting dictator Moammar Gaddafi’s troops and installations from above with unmanned drone aircraft may or may not be the right thing to do, but it's clearly a hostile act. Likewise, providing intelligence, surveillance and logistical support that enable allied planes to attack Gaddafi's military -- and, increasingly, to target Gaddafi himself -- can only be considered hostile. These are acts of war.

Yet Obama, with uncommon disregard for both language and logic, takes the position that what we are doing in Libya does not reach the "hostilities" threshold for triggering the War Powers Act, under which presidents must seek congressional approval for any military campaign lasting more than 90 days. House Speaker John Boehner said Obama's claim doesn't meet the "straight-face test," and he's right. . . .

Most important, what are we doing there? Are we in Libya for altruistic or selfish reasons? Principles or oil? Assuming Gaddafi is eventually deposed or killed, then what? Do we just sail away? Or will we be stuck with yet another ruinously expensive exercise in nation building?

There's also a moral question to consider. The advent of robotic drone aircraft makes it easier to wage war without suffering casualties. But without risk, can military action even be called war? Or is it really just slaughter?

Afghan War advocate Andrew Exum similarly condemns Obama's attempt to justify violation of the WPR as "simply one of the stupidest things I've read in some time" and -- echoing Robinson -- proclaims that "it does not pass the laugh test."  And in The New York Times, Yale Law Professor Bruce Ackerman explains that, through their lawyer-cherry-picking, "the White House has shattered the traditional legal process the executive branch has developed to sustain the rule of law over the past 75 years," and adds:

From a moral perspective, there is a significant difference between authorizing torture and continuing a bombing campaign that may save thousands of Libyans from slaughter by Col. Muammar el-Qaddafi. But from a legal viewpoint, Mr. Obama is setting an even worse precedent.

Although Mr. Yoo's memos made a mockery of the applicable law, they at least had the approval of the Office of Legal Counsel. In contrast, Mr. Obama's decision to disregard that office's opinion and embrace the White House counsel's view is undermining a key legal check on arbitrary presidential power.

And it's always worth recalling that this is being done by a President who made restoration of "the rule of law" a centerpiece of his campaign.

(3) In Mother Jones, NYU Law School's Karen Greenberg notes a trend that was as predictable as it is destructive: rather than signal an end to the "War on Terror," the killing of Osama bin Laden has been seized upon by the bipartisan National Security State -- led by the Obama administration -- to expand its posture of Endless War and accelerate its assault on civil liberties.  Citing multiple examples subsequent to the bin Laden killing, she correctly observes:

The Obama administration and Congress have interpreted the killing of al-Qaeda's leader as a virtual license to double down on every "front" in the war on terror. . . . One thing could not be doubted. The administration was visibly using the bin Laden moment to renew George W. Bush's Global War on Terror (even if without that moniker). . . . In other words, Washington now seems to be engaged in a wholesale post-bin Laden ratification of business as usual, but this time on steroids.

One of the more absurd (though, as a matter of hope, understandable) claims I've heard in quite awhile was that the killing of bin Laden would trigger a reduction in the abuses of the War on Terror -- as though bin Laden was truly the cause of those abuses rather than the pretext for them.  The morning after the bin Laden killing, I wrote the following, addressing those optimistically proclaiming its likely benefits:

Are we going to fight fewer wars or end the ones we've started? Are we going to see a restoration of some of the civil liberties which have been eroded at the altar of this scary Villain Mastermind? Is the War on Terror over? Are we Safer now?

Those are rhetorical questions. None of those things will happen. If anything, I can much more easily envision the reverse. Whenever America uses violence in a way that makes its citizens cheer, beam with nationalistic pride, and rally around their leader, more violence is typically guaranteed. Futile decade-long wars in Iraq and Afghanistan may temporarily dampen the nationalistic enthusiasm for war, but two shots to the head of Osama bin Laden -- and the We are Great and Good proclamations it engenders -- can easily rejuvenate that war love. One can already detect the stench of that in how Pakistan is being talked about: did they harbor bin Laden as it seems and, if so, what price should they pay? We're feeling good and strong about ourselves again -- and righteous -- and that's often the fertile ground for more, not less, aggression.

Read Greenberg's piece, including the numerous examples she examines, to see if there's any doubt that this is exactly what is happening.

(4) The war in Libya is starting to resemble virtually every other war: commenced with claimed humanitarian justifications; supported by well-meaning people convinced by the stated, official objectives; hailed as a short and easy task ("days, not weeks"); and then warped into a bloody, protracted conflict far from the original claims and without any real end in sight.  Earlier this week, one of the war's most vocal supporters, Juan Cole, produced a list he entitled "Top Ten Mistakes in the Libya War," including Obama's failure to get Congressional approval, that "NATO has focused on a ‘shock and awe’ strategy of pounding the capital, Tripoli," and that "NATO put its emphasis on taking out command and control in the capital instead of vigorously protecting civilian cities under attack."

Perhaps that's because "vigorously protecting civilians" was the pretext for the war, not the actual aim.  Yesterday, NATO admitted it killed multiple civilians -- apparently including children -- by bombing a house in a residential area.  It's difficult to know exactly how many civilians NATO has killed thus far because Western armies don't count their victims and the Gadaffi government's claims are obviously unreliable, but whatever is true -- including the fact that such killings are not intended --  they are the inevitable by-product of invading and bombing other countries.  The logic of war ensures that almost every conflict becomes more and more about such killing and less and less about the original lofty excuses for why they were started.

It's thus not a surprise that 39 neocons -- hilariously calling themselves "foreign policy experts" (including John Podhoretz, Liz Cheney, Gary Bauer, Marty Peretz, Karl Rove, Marc Theissen, and Bill Kristol) -- issued a letter yesterday urging steadfast support for (and escalation of) the Libya War. Lofty justifications notwithstanding, this is exactly what they favor: long-term, endless domination of the Muslim world through military force and control over their governments.  That's what the war in Libya, intended or not, has become.

(5) Perhaps most amazingly of all, this policy of Endless War endures even as official Washington inexorably plans -- in the midst of still-booming economic inequality and suffering -- to slash entitlements in the name of austerity.  Bizarrely, while more and more Republicans continue to recognize the growing foreign policy split in their Party (Ross Douthat and Joe Scarborough are the latest to side with the "isolationists" against the war-mongering neocons), many establishment liberals seem to be laying the groundwork for those cuts.  Yesterday, Matt Yglesias said he was "disillusioned" by alarmism over vast income inequality because, he assured everyone, things aren't particularly good for the super-rich; meanwhile Digby -- in a piece highly worth reading -- examines how some liberal pundits (her example is Ezra Klein) seem to be doing the GOP's work (and, more significantly, the White House's) in (unwittingly or otherwise) justifying entitlement cuts.