Does the media's candidate have a prayer?

Jon Huntsman has won fawning coverage from the press. Will it actually hurt him with Republicans? 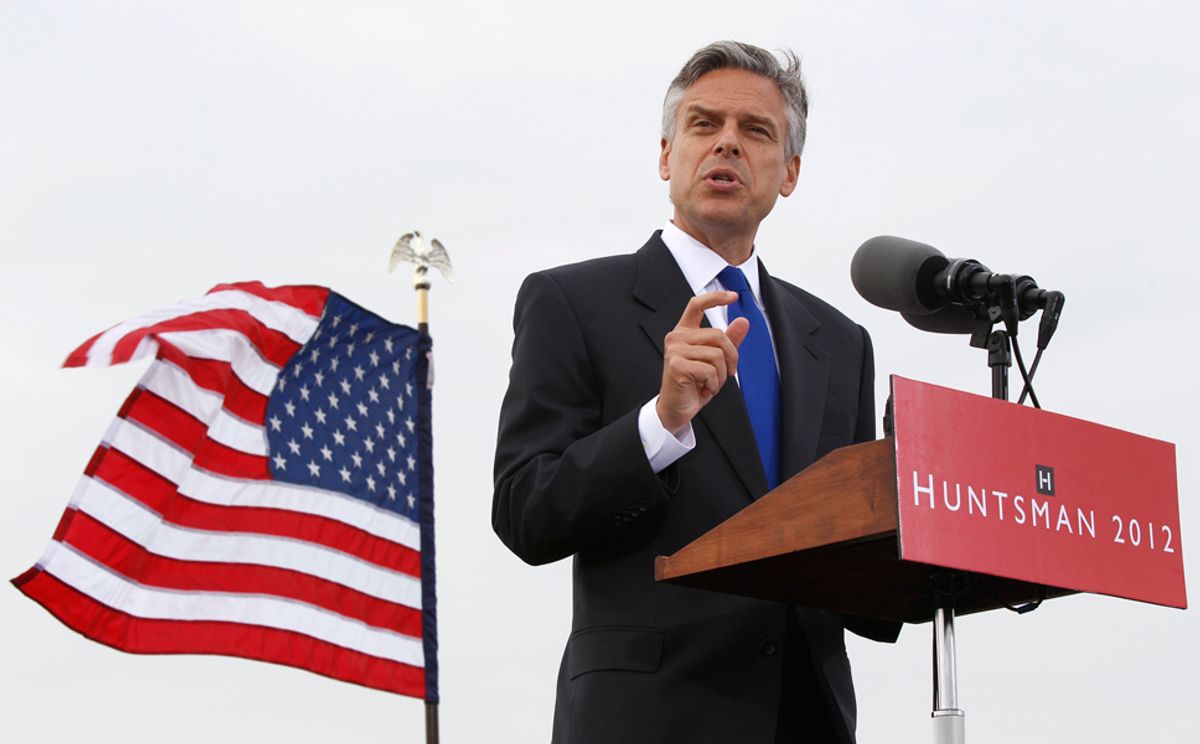 Jon Huntsman doesn't have a significant national profile, barely registers in polls, has already announced that he won't compete in the lead-off Iowa caucuses, and is viewed with suspicion by many of his party's activists and interest group leaders. In other words, when it comes to the 2012 presidential race, he is a long shot -- a very, very, very long shot.

But his formal campaign announcement Tuesday morning -- which apparently drew 100 people (if that) to Liberty State Park in Jersey City, N.J. --  came with a level of media attention more typically reserved for a front-runner, complete with a glowing 6,000-word New York Times Magazine profile. Why? Because Huntsman has already established himself as the media's great Republican hope for 2012.

If you've read about the former Utah governor recently, you've probably seen him described as uncommonly "moderate," "thoughtful" or "reasonable" compared to his fellow Obama era Republicans. That, as Andrew Leonard pointed out Monday, this image doesn't entirely square with most of the positions he's now taking doesn't seem to matter. The political press has decided that Huntsman is the best available fit for its favorite role: the courageous, non-pandering, straight talker -- someone whose struggles in the polls and with his own party's interest group leaders is testament to his maturity and decency as a leader.

Huntsman has been picked for this role because, among other things, he served in the Obama administration, has acknowledged the science of climate change, seemed to support the stimulus in 2009, and has struck a relatively moderate tone on social issues (gay rights in particular) in the past. It's a testament to the rigid ideological conformity of today's GOP that this is enough to stand out. It also helps that Huntsman seems to have decided that winning the media's affection is his best strategy, at least at this stage of his campaign.

We've seen campaigns like this before. The classic example is Bruce Babbitt, the former Arizona governor who sought the 1988 Democratic presidential nomination. Eager to stand out in a crowded pack, Babbitt embraced a plan for a 5 percent national sales tax, literally standing up at debates and daring his opponents to show some courage and join him. (None of them did.) The combination of Babbitt's self-deprecating humor, his awkward speaking style and his politically suicidal platform made him a runaway favorite among reporters and commentators. Even as his support remained barely detectable in polls, he was the subject of one fawning newspaper and television profile after another. After dismal showings in Iowa and New Hampshire, Babbitt exited the race, and acknowledged the disproportionate attentions he'd received from the press:

Babbitt also joked that reporters had written so many flattering stories about him that it indicated "a deliberate conspiracy to destroy my candidacy by making me into kind of a house pet." Later, more seriously, he conceded that favorable publicity, complimenting him for his willingness to take unpopular stands, might have prompted him to overemphasize the unpopular parts of his message -- particularly his call for a tax increase.

"If I were doing it over again," Babbitt said, he might "spend a little more time talking about other things," such as his advocacy of environmental causes and his call for more attention to education, day care and other "children's issues."

Huntsman's campaign will most likely suffer a similar fate, although he probably has a different example in mind: John McCain in 2000. McCain, with his all-on-the-record bull sessions with reporters, was celebrated as an uncommonly principled reformer -- a man unafraid to battle his own party on campaign finance reform. The actual issue of campaign finance didn't matter to many (or any) voters, but the story they were told did, and -- after skipping Iowa -- McCain pounced on front-runner George W. Bush in New Hampshire, racking up a stunning 19-point win.

Huntsman is also concentrating on New Hampshire now. But it's hard to imagine him taking off quite the way McCain did. He lacks McCain's heroic biography and his personality. Plus, McCain caught a major break in 2000: There were no other serious alternatives to Bush (whose competition in Iowa consisted of Steve Forbes, Gary Bauer, Alan Keyes and Orrin Hatch). So McCain was able to get away with waiting until New Hampshire to make a stand. It's not at all clear Huntsman -- or anyone -- can do the same this time around. And even when he won New Hampshire, McCain still had a problem: The crusading reformer's image he'd cultivated -- which the media had eaten up -- certified him as disloyal to key components of the GOP coalition. After New Hampshire, it was easy for the Bush campaign and its establishment allies to paint McCain as a tool of the liberal media and "mischievous" independents and Democrats. McCain never really had a shot.

Still, second place was a nice consolation prize for him. It made McCain a national political star and set him up for a follow-up bid a few years later. That's probably the best that Huntsman can possibly get out of this campaign.