The pugnacious host resurfaces on Current TV, with cheaper production values but the same righteous ire 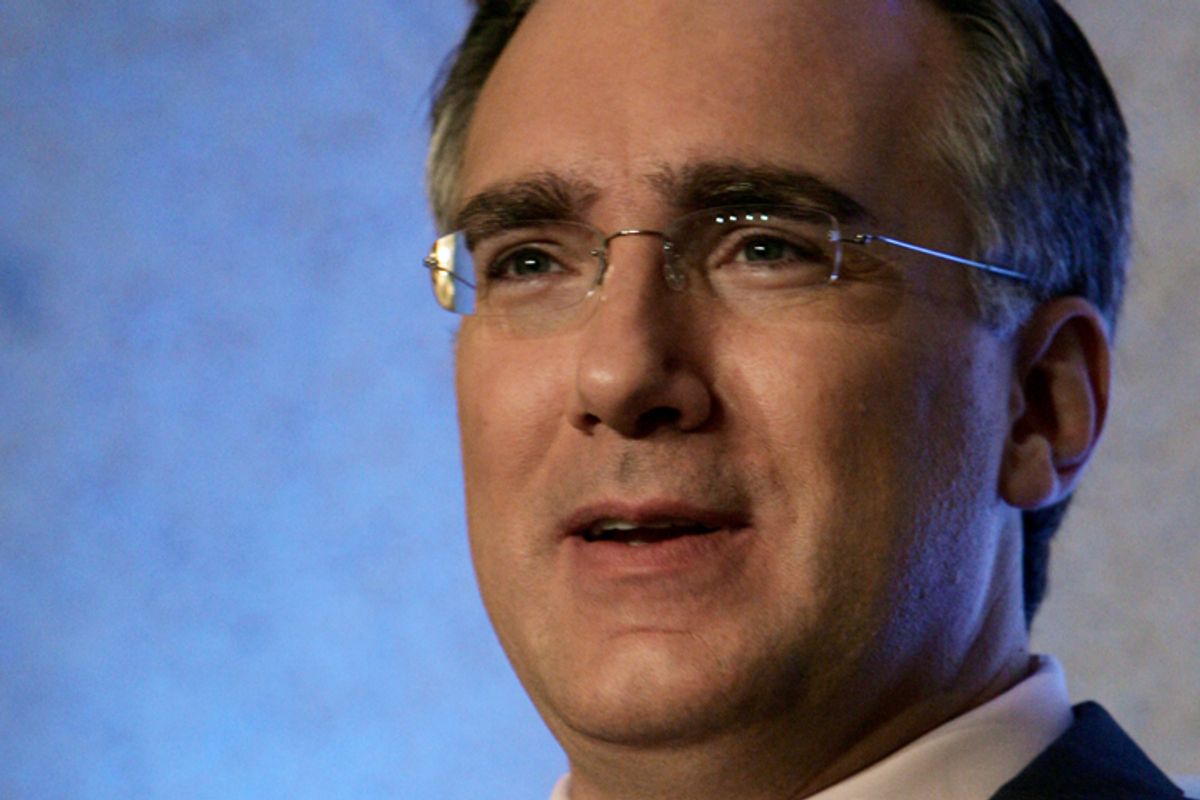 Keith Olbermann's one-time MSNBC program "Countdown" resurfaced on Current TV last night, six months after he heatedly left his previous employer -- the latest in a long line of rancorous Olbermann departures. I'm happy to see him return to TV, in a diminished form, in a smaller venue, and (judging from last night's glitchy debut) with spottier production values.

I always respected Olbermann when he was at MSNBC because he was both philosophically consistent and a flat-out terrific writer, dismantling Republican gasbaggery and Democratic gutlessness in a torrent of lawyerly rhetoric. And his breathless monologues were remarkable. Impassioned, smart, constructed from "Deadwood"-dense run-on sentences, and often combatively sure of their correctness, they read, and played, less like 21st century political screeds than some relic of 1950s radio that happened to have video attached. Olbermann was hugely influenced by Edward R. Murrow, to the point where you could accuse him of broadcast news karaoke. But so what? Who besides Jon Stewart is really even bothering to carry on in the Murrow tradition and be both pugnacious and literate? I mean, of the five or six liberals who are even permitted to have a talk show on a major cable network, and to actually be unabashedly, leftishly liberal, rather than faintly to the left of Fox News?

Anyway: Olbermann. He's back. He's still smart. He's still smug. He's still got the run-on sentences, the vaguely malicious grin, and the determination to pick substantive fights with any individual or institution that he thinks is failing liberal ideas (the Obama administration included). There were back-of-the-classroom, wise-ass swipes at Republican gods and heroes and recaps of official stupidity and viral videos. And there were by-now-expected Olbermann catchphrases and locutions (calling Fox News "Fix News," for instance, and Glenn Beck "Lonesome Rhodes Beck"). During the opening preview of contents, Olbermann answered Sen. John McCain's question of what Ronald Reagan "would be saying today" about Obama's handling of Libya with, "Nothing. He's dead, he was a lousy president, and he helped keep Gadhafi in power."

The Current TV incarnation of "Countdown" was very close to the MSNBC "Countdown," with the same theme music and most of the same features and graphics. The "Worst Persons" segment hauled out the faux-horrific background music (Bach's Toccata and Fugue), and was characteristically twist-the-knife snide -- although here, as elsewhere, there were volume control issues that made it tough to understand the host. There were awkward pauses before taped segments unreeled, video clips with resolution so poor that they looked as if they'd been grabbed off YouTube, and at least one instance where the printed text of a quote was partly obscured by a chyron.  I wouldn't quite call it amateur hour, but it wasn't smooth, either.

But again, so what? These are production issues that will fix themselves in time. Olbermann was back. He jumped right back into the thick of things. And he was very, very good.

He had a segment likening the Obama administration's shifty legal rationale for military involvement in Libya with the George W. Bush administration's legal rationale for "enhanced interrogation," i.e., torture, and he didn't just raise the comparison and then forget about it; he built on it throughout the segment and followed up with his guest, Michael Moore (who was a lot more bearable than usual). This sounds like the sort of thing that every TV talk show host would do, but unfortunately, most of them don't. Most of the anchors and hosts on CNN, MSNBC and Fox can barely sustain a coherent sentence, much less an argument that seeks to prove that two outwardly dissimilar matters of presidential policy are linked by a disdain for constitutional law and a willingness to cherry-pick fact and opinion to "prove" the rightness of whatever the boss would have done anyway.

Olbermann was just as strong elsewhere. His piece on Republican talk show hosts selling endorsements of right-wing nonprofits to the highest bidder was old news, but a guaranteed blood-pressure-raiser for his viewers, and thus irresistible. The segment on Clarence Thomas' conflicts-of-interest was lively and on-point, and featured a strangely poignant appearance by former Nixon counsel and ex-conservative John Dean, who said that if a liberal Supreme Court justice were involved in similarly shady dealings, Republican legislators would have already hatched a plan to investigate and censure him. And at the end, there was a bit of score settling, with Olbermann interviewing Daily Kos chief Markos Moulitsas, who was banned from MSNBC following a Twitter feud with conservative MSNBC host Joe Scarborough. Moulitsas said Scarborough was a not-so-secret administrative power at MSNBC, deciding both the form and content of the channel's programs. "Joe Scarborough, such a loser host, was dictating who you could talk to," he told Olbermann.

If you didn't watch last night's premiere -- and given Current TV's spotty cable carriage, you probably didn't; check the website to find out how to watch the show on TV or via the Internet -- I've embedded a few segments below. I wish Current TV had offered the debut show's longest monologue as an embed: Olbermann's mini-speech about how economic inequity was at the center of America's current ills. It ended with a long quote from a Harriet Beecher Stowe magazine profile of Abraham Lincoln. What other cable host would even think of ending a segment that way?

Bottom line: Olbermann is a net force for good in politics and journalism. I don't care whether he quit MSNBC or was fired, or why. I could not care less if he's a good employee or a likable man. It's good to have him back.