Why the GOP should nominate Barack Obama in 2012 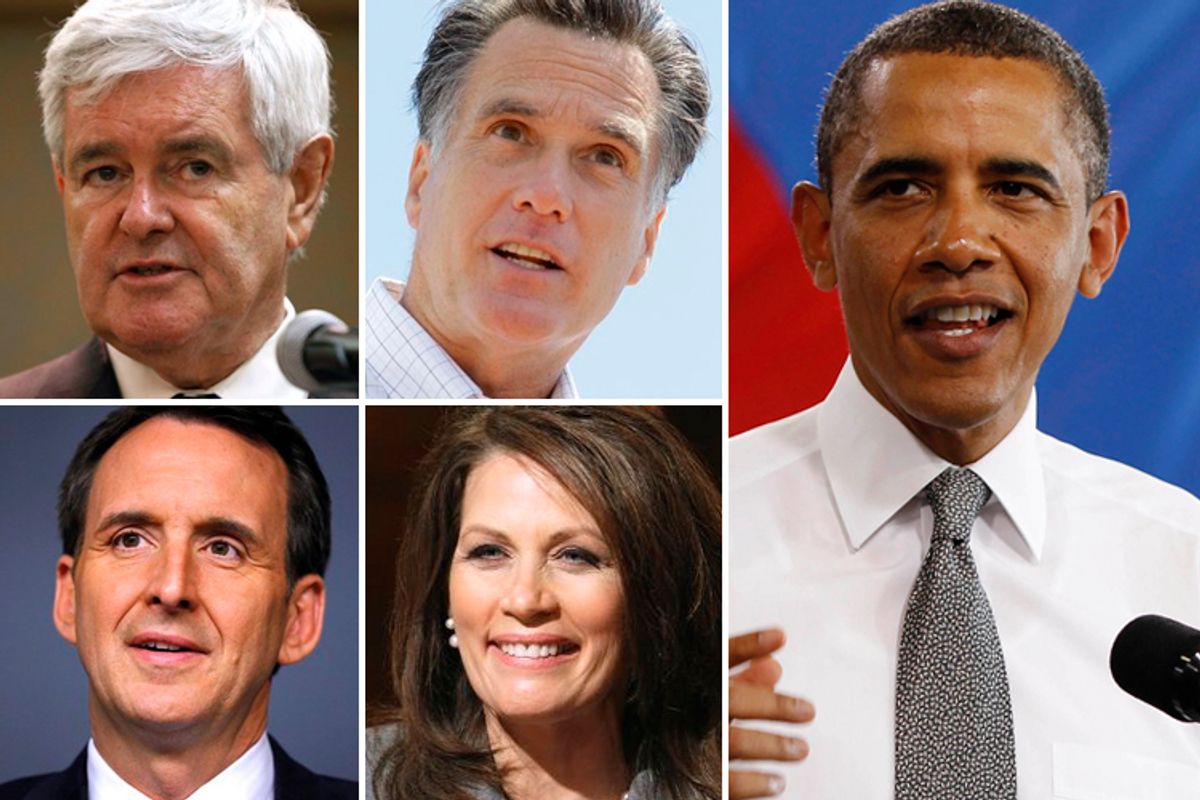 With the possible exception of Jon Huntsman, the Republican presidential field is weak on candidates who could appeal to centrist swing voters, including moderate Republicans. But there is one 2012 prospect who has a proven track record of pursuing policies that owe a great deal to the moderate Republican tradition and who could potentially shake up the race for the GOP presidential nomination: President Barack Obama.

In the last generation, the old-fashioned moderate Republicans from New England and the Midwest symbolized by Nelson Rockefeller have been driven out of the GOP by the conservative followers of Barry Goldwater and Ronald Reagan. Streaming into the Democratic Party as voters, and buying it with ample Wall Street cash as donors, this upscale elite has changed the party from a populist liberal alliance of unionized workers and populists into a socially liberal, economically conservative version of the old country-club Republicanism of the pre-Reagan era. The transformation began under Jimmy Carter, accelerated under Bill Clinton and has nearly been completed under Barack Obama. This is not your grandfather’s Democratic Party. It is your grandfather’s Republican Party of 1955.

In his book "The Agenda: Inside the Clinton White House," Bob Woodward described a Clinton administration meeting in 1993: "Where are all the Democrats?" Clinton bellowed. "I hope you’re all aware we’re all Eisenhower Republicans," he said, his voice dripping with sarcasm. "We’re all Eisenhower Republicans here, and we are fighting the Reagan Republicans. We stand for lower deficits and free trade and the bond market. Isn't that great?"

The Obama administration is the third Clinton administration -- or perhaps the fifth Eisenhower administration, following the four combined terms of Dwight Eisenhower and Bill Clinton (by comparison to both, Richard Nixon, as president, was a New Deal liberal). Under the influence of Treasury secretary and master fundraiser Robert Rubin, the Mark Hanna of the modern Democratic Party, Clinton scrapped the "putting people first" agenda he had run on in 1992 and focused on rapidly balancing the budget -- a longtime obsession of fiscal conservatives in the Eisenhower-Rockefeller tradition, rather than supply-siders in the Reagan-Kemp tradition. Similarly, Barack Obama supported a stimulus that was only a quarter as big as necessary -- half of the $2 trillion that his advisor Christina Romer estimated was necessary, with about half of that wasted on ineffectual tax cuts. In spite of the prospect of years of mass unemployment, Barack Obama, in the spirit of the budget-balancing Rubinomics of the 1990s and Ike-onomics of the 1950s, has called for freezing discretionary spending except for defense. He has allowed the conversation to be shifted from recovery to long-term fiscal consolidation, which conservatives will try to use as an excuse to partly replace Social Security and Medicare with mandatory private accounts that will generate lucrative fees for Wall Street and the insurance industry from a huge captive population of American fee-payers.

If he were to run for the Republican nomination, Obama could point out that in the past few years he has already done far more to thwart American liberalism than any of his rivals in the GOP primary have done in their entire careers. He could boast that when liberal economists called for the temporary nationalization of insolvent megabanks, forcing shareholders to swallow their losses and firing their managers, he stood firm and protected Wall Street.

In the area of job creation, too, Obama can honestly tell Republican voters that he never supported massive public works job creation programs, like those of the New Deal. To the extent that the Obama administration has had any job creation policies at all, other than an inadequate stimulus and diversionary rhetoric about training today’s children for high-tech jobs in the 2030s or 2040s, it has consisted of payroll tax cuts -- a supply-side measure that practitioners of voodoo economics like Ronald Reagan and Jack Kemp would have supported.

Of course, there are limits to Obama’s moderate Republicanism. While his economic policy is moderately conservative, Obama’s foreign policy is expansive -- and expensive -- Neoconservatism Lite, not a rebirth of Eisenhower’s cautious, budget-conscious "New Look" strategy of the 1950s.

In spite of an economic boom, Eisenhower worried about the effects of military spending on the civilian economy. In spite of a near-Depression, Obama exempted defense spending from the government spending freeze.

Eisenhower refused to take part in the British, French and Israeli attack on Egypt, during the Suez crisis in 1956. Obama, in contrast, agreed that the U.S. would provide most of the muscle in the Franco-British-American attack on Gadhafi’s regime in Libya.

In committing the U.S. to a third ongoing war in a Muslim country, President Obama lied to the public and trashed the Constitution. The administration lied when it said that the purpose of the Libyan war was only to protect civilians in a few areas of Libya from being massacred by Gadhafi’s forces. Pilots from the U.S. and other NATO countries soon began trying to assassinate the Libyan dictator from the air.

Obama had already torn up the Constitution, when his administration announced, in effect, that the part about Congress declaring war was a dead letter, as long as an American war was approved by the United Nations and European countries that belong to NATO. The president then set fire to the torn-up shreds of the Constitution, when his administration informed Congress that the War to Assassinate Gadhafi did not trigger the 1973 War Powers Act, with the Orwellian argument that the attempts at murder by American forces of the ruler of Libya while bombing all of the nation’s territory did not rise to the level of "hostilities."

All of this might help Obama win the Republican nomination. His appeal to some neocons as well as to socially moderate fiscal conservatives would make Barack Obama an attractive Republican presidential candidate in 2012. After all, the chief problem facing the GOP is its over-reliance on high turnout among white working-class populist conservatives. The Goldwater-Reagan conservatives succeeded too well in pushing out Rockefeller Republican RINOs (Republicans in Name Only), many of whom voted for Obama in 2008. If he received the Republican nomination, Obama might bring many of the moderate Republicans back home. His fiscal conservatism would appeal to Republicans worried about deficits and put off by supply-side economics, while his foreign policy of three simultaneous wars, one of them his own, would reassure neoconservative Republicans worried about the kind of right-wing isolationism symbolized by Ron Paul.

Best of all, Obama could run on healthcare. "ObamaCare" after all was modeled on "RomneyCare" in Massachusetts and resembled the healthcare plan set forth in the 1990s by the conservative Heritage Foundation. Another model for the newly enacted healthcare system, based on individual mandates and subsidies to for-profit private insurance, was the plan that Lincoln Chafee, an old-fashioned Northeastern liberal Republican, put forth during the Clinton era healthcare debate. The pedigree of Obama’s healthcare program stretches all the way back to his true role model, Dwight Eisenhower, whose vice president, Richard Nixon, backed the Eisenhower’s administration plan to expand healthcare access by subsidizing private insurance rather than through universal social insurance like Medicare.

Obama’s speech to the Republican convention practically writes itself:

You can already hear the thunder of the standing ovation in the Republican convention hall, when Barack Obama declares: "America needs a president who can stand up to the kind of Wall Street-bashing, big-government, Franklin Roosevelt liberalism that thinks that three wars at one time are too many -- and my record in the White House proves that I am that president."