The new high price of mouthing off

Megan Fox and John Galliano face the music for their Hitler comments -- but was the punishment too steep? 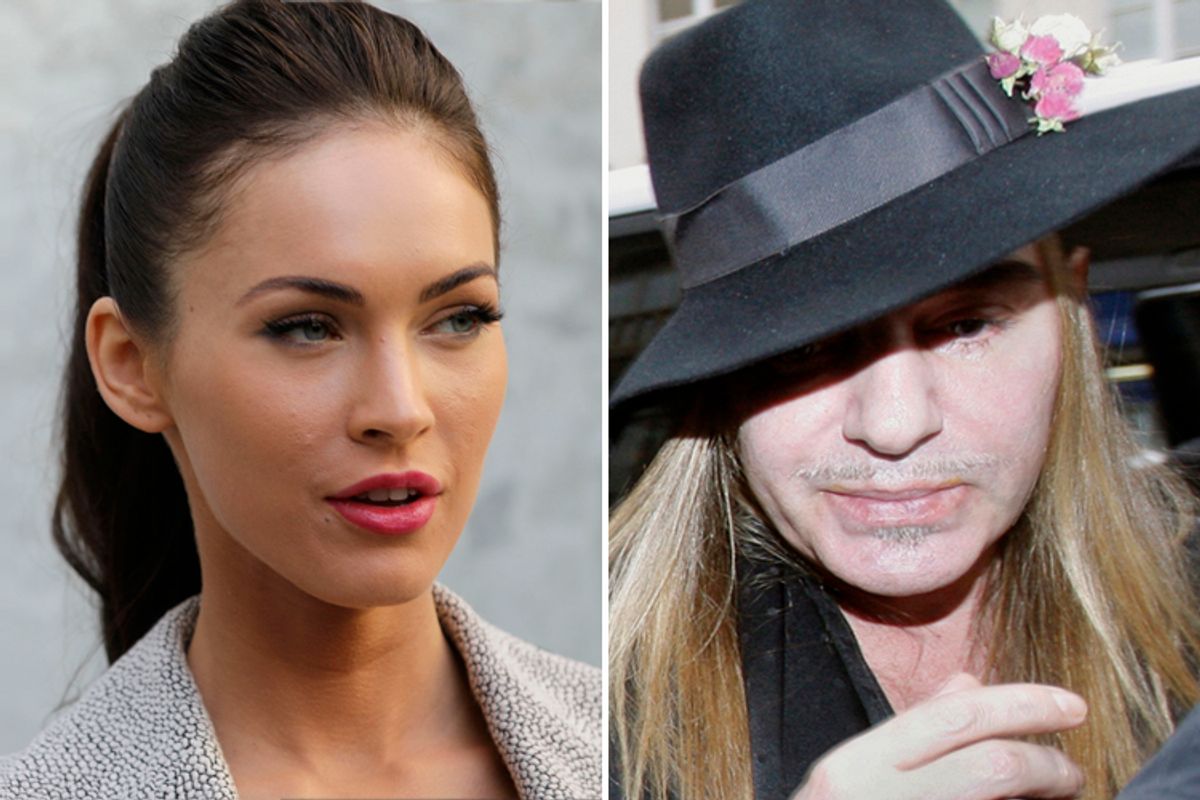 How punishable should saying stupid things be? In two very separate incidents, the unlikely duo of Megan Fox and John Galliano found themselves on the receiving end of a pink slip for their insensitive remarks. Fox lost out on appearing in the latest installment of the blockbuster "Transformers" franchise. Galliano meanwhile is set to stand trial Wednesday for his comments, and faces up to six months in prison and $31,500 in fines. But do the consequences fit the actions?

Back in 2009, Fox let loose with a few choice words about her director, Michael Bay, describing him in an interview for Wonderland magazine as "like Napoleon" before taking a turn toward another famous figure: "He wants to create this insane, infamous mad-man reputation," she said. "He wants to be like Hitler on his sets, and he is. So he's a nightmare to work for but when you get him away from set, and he's not in director mode, I kind of really enjoy his personality because he’s so awkward, so hopelessly awkward." That's right, she didn't just say Michael Bay was Hitler, she said he was an awkward Hitler. Ouch.

The comments, which at the time the likes of Entertainment Weekly dismissed as just another one of Megan Fox's "brain farts," came back to haunt her later.  Suddenly, Fox's babe services were no longer needed for "Transformers 3" -- and a comely Victoria's Secret model was cast in her stead. Now, Bay tells GQ, "You know, the Hitler thing. Steven [Spielberg] said, 'Fire her right now.'" Let that be a lesson: Do not screw with Spielberg.

Spielberg, in addition to being one of the producers of the film, is the guy who gave us "Schindler's List." Who gave a million bucks to the brand-new Museum of American Jewish History. Perhaps he just doesn't like the cast talking smack about the director. Or more specifically, he doesn't appreciate someone offhandedly comparing being a movie star on a big budget action picture to the suffering millions of individuals endured under a Nazi dictator.

Speaking of Hitler, that brings us to Galliano. In February, the eccentric, mustachioed Dior designer went on a drunken, abusive tear at a fellow patron in a Parisian restaurant, slurring about, among other things, her "dirty Jew face." Though Galliano was swift to issue a denial of the incident, his credibility went out the window like an old issue of Vogue when a video emerged of him declaring, during a different restaurant altercation, "I love Hitler. People like you would be dead today. Your mothers, your forefathers, would all be fucking gassed."

Now, if everyone who ever called someone a Nazi got canned for it, there would be roughly five people left in the workforce -- and none on the Internet.  Likewise, if everyone who got tanked up and stupid during his non-working hours got the boot, I'd wager again that the world of haute couture would take quite a beating.

Yet the fact that both Fox and Galliano received retribution for mouthing off suggests that increasingly, words have consequences. In April, Kobe Bryant was slapped with a stiff $100,000 fine for calling a ref a "faggot,"  and on Tuesday, Tracy Morgan was in Nashville  making public amends for his homophobic set there earlier this month. By now, Fox -- like Kobe Bryant and Tracy Morgan -- seems to have bounced back just fine from her episode of foot-in-mouth-itis. And while it's too soon to tell whether Galliano can stage a comeback, he is already studiously distancing himself from his actions. He has publicly apologized for his remarks, and his attorney this week said that "He had a triple addiction to alcohol, benzodiazepine (Valium) and sleeping pills ... The combined effect of these drugs is a state of complete and utter abandon."

But the question that remains is, is the punishment appropriate to the verbal crime? You call Michael Bay Hitler and you're out of a franchise? Really? You say something that's admittedly horribly racist, but lose your fashion empire and face going to jail for six months? Yet perhaps there's more to a verbal goof-up than a mere case of the stupids.

In his GQ story, Michael Bay says of Fox's "Transformers" time that "She was in a different world, on her BlackBerry. You gotta stay focused ... I'm sorry, Megan. I'm sorry I made you work twelve hours. I'm sorry that I'm making you show up on time. Movies are not always warm and fuzzy." And Galliano didn't just have a few merlots too many and get loose; the night of his notorious tirade he had four times the legal limit of blood alcohol content, and the earlier video and a similar incident in October prove it wasn't his first time at the crazy bat.

Sure, when you mess up and say idiotic things, you should be called on your crap. You should learn to think before you open your pie hole and let hateful, dumb things come tumbling out. But the real career killer isn't being offensive. It's being a bad worker. Fox and Galliano didn't just spew; they brought their own egos and inability to do the job at hand to their high-paying, high-profile workplaces. They were distracted, either by their BlackBerrys or their Valiums or their own simple lack of consideration. You can be a drug-abusing, domestic-abusing screw-up, and if you show up for work on time, you can have a job. Put your foot in it once too often? Come down with a severe attack of what sure looks like profound entitlement? That's when you might just find yourself not just apologetic, but unemployed.