By Elizabeth A. Kennedy - Zeina Karam 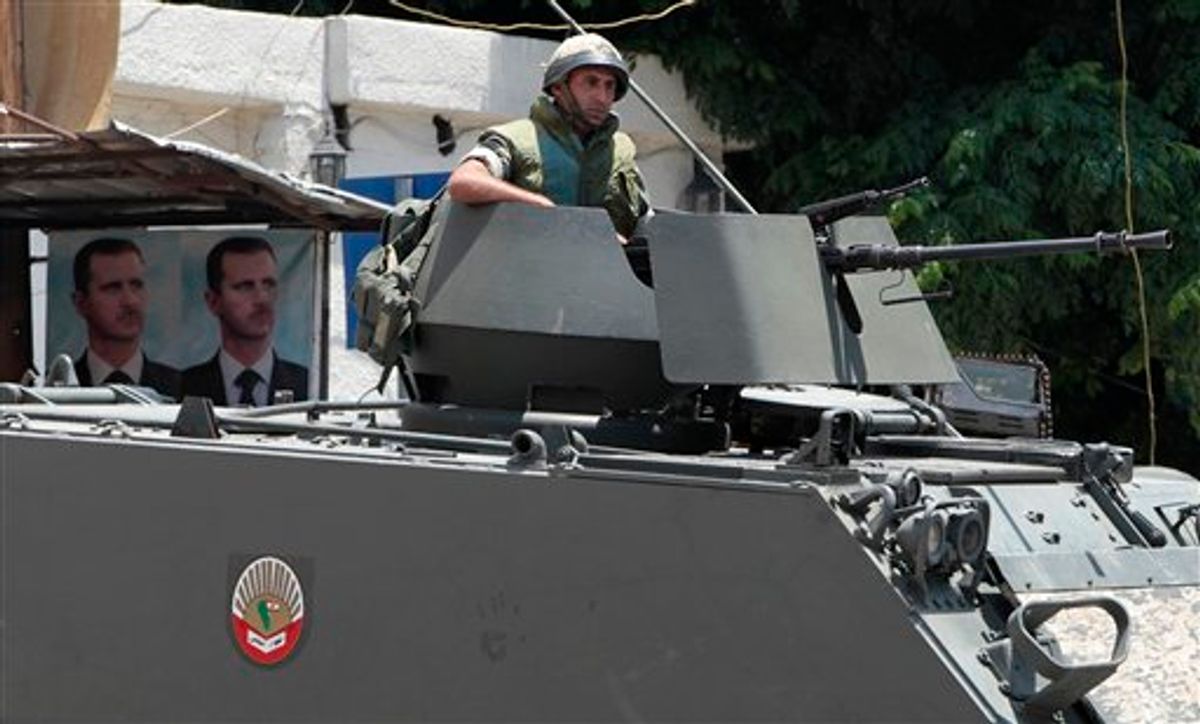 Lebanese army soldier, sits atop armored personnel carrier (APC), near to portraits of Syrian President Bashar Assad, on Saturday June 18 2011, on a street in Tripoli where a clashes broke between Sunni and Alawite groups on Friday, after a demonstration of the anti-Syrian regime protesters in Tripoli, northern Lebanon. A senior member of a Lebanese political party allied with Syria and an off-duty soldier were killed Friday after gunmen opened fire and lobbed a grenade near hundreds of people holding an anti-Assad protest in northern Lebanon, a security official said in Beirut. (AP Photo/Hussein Malla) (AP)
--

It was the latest deadly turn in a 3-month-old uprising that appears unbowed by a relentless government crackdown. The violence flared a day after a speech in which Assad, trying to contain the situation, offered a vague promise of reform, one brushed off as too little, too late, by the opposition, which wants an end to the Assad family's 40-year authoritarian rule.

In an attempt to blunt the uprising's momentum, tens of thousands of regime supporters converged on squares in several major cities on Tuesday, shouting, "The people want Bashar Assad!" and releasing black, white and red balloons -- colors of the Syrian flag.

They soon clashed with opposition supporters, drawing in security forces. In a main square in the central city of Hama, security personnel opened fire on anti-regime protesters, killing a 13-year-old boy, said the Local Coordinating Committees, which track the Syrian protest movement.

Three other people were reported killed in Homs, in central Syria, and three in the Mayadin district in the eastern city of Deir el Zour during pro- and anti-regime demonstrations.

The pro- and anti-Assad sides have fought each other in the past, but Tuesday's bloodshed appeared to be the worst such violence.

"We are seeing an escalation by authorities today," said Omar Idilbi, spokesman for the committees. "They are sending pro-government thugs along with security forces to attack protesters."

The opposition estimates more than 1,400 Syrians have been killed and 10,000 detained as Assad unleashed his military and security forces to crush the protest movement, which sprang to life in March inspired by the revolutions in Tunisia and Egypt.

The unending government repression and bloodshed appeared to be driving even Russia, a longtime Syria backer, to distance itself from Assad, as international pressure mounts for him to accept major political change.

"We need to apply pressure on the leadership of any country where massive unrest, and especially bloodshed, is happening," Russian Prime Minister Vladimir Putin said in Paris.

"In the modern world it is impossible to use political instruments of 40 years ago," Putin said of the Syrians' tactics. It remained to be seen, however, whether this signaled a change in Moscow's opposition to tough U.N. action on Syria.

Assad, who belongs to the minority Alawite sect, an offshoot of Shiite Islam, still enjoys support in Syria, although it is dwindling. His main base is among the business elite and middle classes who have benefited from his economic policies, and among minority groups that fear being targeted if the country's Sunni Muslim majority takes over.

Activists claimed, however, that the government mobilized pro-regime demonstrators Tuesday, forcing students to participate and busing in people from villages in the Mediterranean coastal heartland of the ruling elite.

An eyewitness in Homs told The Associated Press a pro-Assad protest with some 10,000 participants "descended" on the city. "Nobody knows them, they are strangers to the city, they were asking for directions," he said.

"The security forces arrested the wounded. They stepped on them on the ground and arrested them," said the witness, who spoke on condition of anonymity for fear of reprisal.

In the restive northern province of Idlib, where the army has conducted operations for days, activists said soldiers had reached Hamboushieh, a village a mile (2 kilometers) from where thousands of displaced Syrians were camped out on the Syrian side of the Turkish border. Heavy shooting was reported in the area, but its source was not immediately clear.

Thousands more had already fled into Turkey. The U.N. refugee agency's spokesman, Adrian Edwards, said Tuesday that 500 to 1,000 people a day have been crossing from northern Syria into Turkey since June 7, and more than 10,000 were being sheltered by Turkish authorities in four border camps.

Assad's speech at Damascus University on Monday was only his third public appearance since the uprising began in March. He said a national dialogue would start soon and he was forming a committee to study constitutional amendments, including one that would open the way to forming political parties other than the ruling Baath Party. He acknowledged demands for reform were legitimate, but he rehashed allegations that "saboteurs" were exploiting the movement.

Like earlier efforts, this Assad bid to appease the opposition fell flat. Prominent dissident Hassan Abdul-Azim, echoing the sentiments of others, said the Syrian president failed to detail a vision of moving "from a dictatorship into a national democratic regime with political pluralism."

In the hours after Monday's speech, the state-run news agency SANA said Assad was offering a "general amnesty" for crimes committed before June 20. But there were few details, and it appeared the decree applied only to prisoners with a fatal illness or who were convicted of minor smuggling or drug charges.

The International Committee of the Red Cross announced in Geneva on Tuesday the Syrian government has promised to give it and the Syrian Red Crescent more access to Syrians wounded and detained in the crackdown.

The announcement came after ICRC President Jakob Kellenberger met with Prime Minister Adel Safar and Foreign Minister Walid Moallem in Damascus. Kellenberger had urged Syria to allow the humanitarian organizations to operate unhindered to assess the needs of those affected in the unrest and military operations.

Zeina Karam can be reached on http://twitter.com/zkaram