How I became a reality show dupe

I saw a beautiful woman in a wheelchair who needed help. I guess that was my first mistake 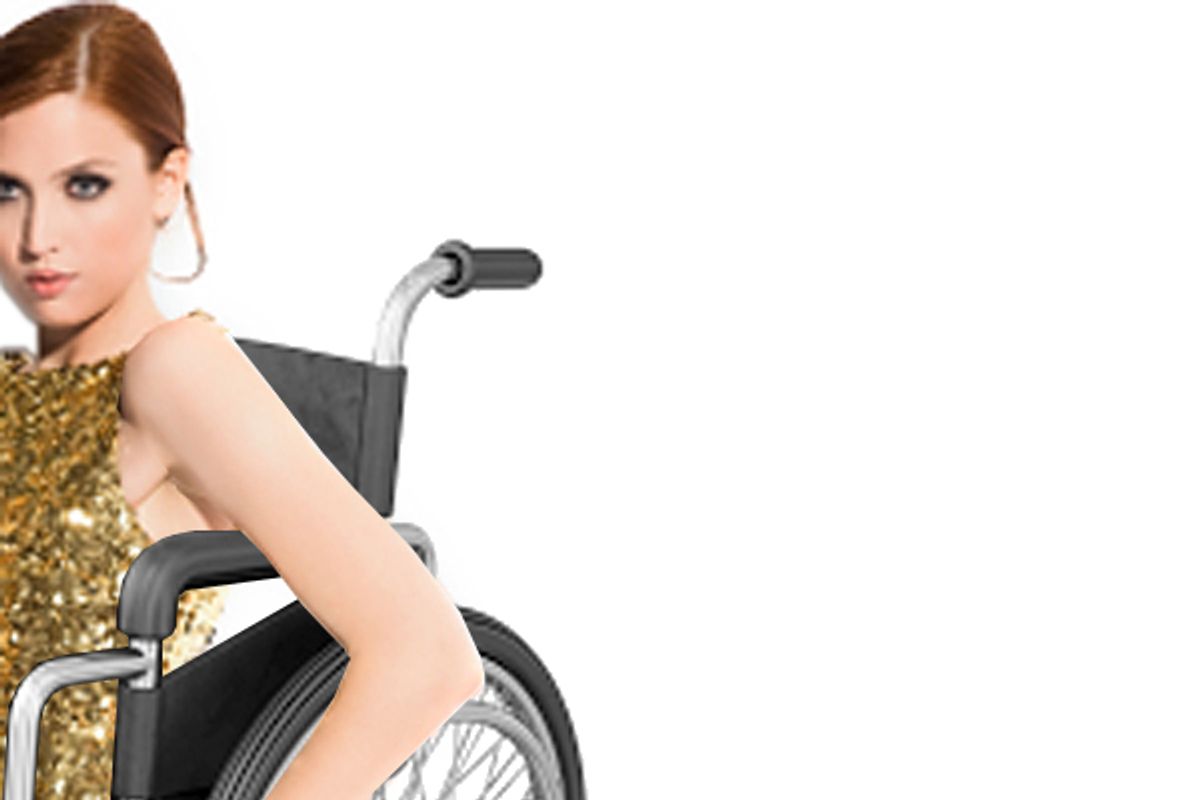 I had just finished my weekly therapy appointment and was walking to Union Square to take the subway back to my Midtown office when I saw a girl in a wheelchair on the sidewalk. She was glamorously beautiful, dressed in a strapless gold cocktail dress, her lids dusted with aqua eye shadow. A pair of candy-red Manolo Blahniks, askew on the footrests, gleamed in the sun. But her look was offset by the thin, mangy quilt covering her midsection. And her wheelchair was battered and dented, the gray rubber tubing frayed around the wheels.

She appeared marooned on the sidewalk, parked against the railing of a restaurant that was just beginning to fill with tony lunchtime diners. I saw her looking at me and as I approached she said, "Excuse me, sir, but can you please do me a favor and wheel me across the street? I just don't have the energy to get there."

I was flattered that of all the people passing by her, she had asked me. "Of course I'll help you," I said. I released the brake she had set and felt a twinge of near-grief for this stranger life had treated so unfairly. In comparison to her daily ordeal, the agenda of my therapy session -- the desire to find relief from yet another untenable love affair -- seemed, well, just plain self-indulgent.

I was aware of people in the surrounding cafes watching us -- a middle-aged man in a suit and tie on a hot summer day wheeling a young woman in a gold-sequined dress. We looked like a couple out of a Tennessee Williams play, a version of characters like Sebastian and Violet or Big Daddy and Lil' Sis.

"You're a good driver," she said, as I pushed the rickety chair over the sidewalk. "And what a relief not to have to do it myself." The wheels were misaligned, but I was intent on keeping her on course and not revealing that the effort was greater than I had expected.

"What a nice guy," she said. "I could tell that about you the moment I saw you -- that's why I asked for your help. I can only go so far in this before my arms give out."

I noticed that her arms were model-thin -- there was no evidence that her biceps and forearms had been strengthened by her constant wheelings. Perhaps her confinement was a recent development? And, if so, that fact made her cheerful attitude all the more admirable and poignant.

We spoke about her destination, the Coffee Shop restaurant, now just yards away. "Do you ever go there?" she asked, referring to the establishment long popular as a hangout for models and hipster downtown types.

"Something about the place has always intimidated me," I said. "Everybody there seems so … beautiful and judgmental. I just avoid it."

She tilted her head back to look at me adoringly and putting a well-manicured hand on my arm. "Next time, you let me know and we can go together. You can sit with me at my table anytime."

The Coffee Shop was crowded and the diners there had begun to notice us. "Wait, stop here!," she shouted. "I see my boyfriend!" She threw off her quilt with such abandon that, for a moment, it floated in the air like a blue cloud before settling on to the sidewalk.

Then, suddenly leaping from the confines of the chair, she ran down the block into the arms of a handsome young man, who spun her around and kissed her passionately. And as she kicked off her shoes and bawdily wrapped her legs around his torso, I felt like a jilted lover, the old fool who had been duped by his young, unfaithful wife.

As this spectacle played itself out for everybody and I heard scattered applause, I could feel the eyes of the people in the cafe on me. The attention felt palpable, a discernible, concussive force. I felt a rush of heat and embarrassment. Desperate to appear amused, I spoke to one of the people in the line.

"What just happened?" I asked him.

"Dude, I couldn't begin to tell you."

I was so confused that for a moment I even thought, "Is it possible that love and desire could make a person able to do what she just did -- regain the use of her legs?"

"What do I do with this," I asked the same stranger, indicating the threadbare quilt that I had draped over my arm like a manservant awaiting his charge from the bath.

But then, I noticed a cameraman on the opposite side of the street aiming his lens at me, a boom microphone held high in the air, a huddle of shabbily dressed technicians.

The young girl sauntered back, suddenly transformed into a hard dame out of a film noir, her pancake foundation thick, kabuki-white in the bright sun. She gave me an air kiss, careful not to crush her sprayed hair. "Look over there," she said, pointing to the camera. She explained I was on some "gotcha" reality show akin to "Candid Camera," but I felt so humiliated, I simply tuned out. I never even heard the show's name. The woman continued. "The minute I saw you coming my way, I said, 'This one, he's going to fall for it. He'll be the perfect dupe.' You played the part perfectly."

A young man with a headset on approached and handed me a clipboard with a form to sign, authorizing that my impromptu performance could be aired. And in my dazed condition and desire to exit this real-life set, I signed it.

I remember many episodes of the original "Candid Camera" TV show from the late 1960s and early '70s. I remember watching people fail to get angry at mailboxes that talked to them, or water spraying through telephone receivers after the person on the other end sneezed, or when car parts came rolling down ramps at public parking garages while the owner anxiously awaited the valet. In one of my favorite episodes, co-host Fannie Flagg is shown coasting down a hill in a car in which the engine has been removed. She pulls into a gas station and as she rolls down the window, asks the attendant to fill up the car and check the oil in the engine. When he lifts the hood, we see his bafflement as he scratches his cheek; he even walks to the trunk to see if it the motor might be back there.

"Oh, I wouldn't know about that," Flagg says, busily brushing on mascara in the rear-view mirror. "My husband takes care of those things."

It seemed to me, at least from the couch, that those shows were meant to introduce gentle satire and lightness into the world. In those old episodes, when the punch line was delivered, both parties laughed and hugged and all was OK.

But for me, all was not OK. On the subway back to the office, I was already rehearsing the self-deprecating tale I would tell my coworkers. As I rocked uptown on the Number 6 train, I began to think that the practical joke played on me hadn't been so funny after all. As novelist Sue Grafton writes in her novel "O Is for Outlaw," "Lying contains the same hostile elements as a practical joke in that the ‘victim' ends up looking foolish in his own eyes and laughable in everyone else's." Indeed, I was lied to, rather than played with. And like so much of reality TV, this particular prank had been emptier, meaner than the ones I remembered from my youth. What did it prove, exactly, except that strangers can fool you?

I must have been one of many dupes to fall for the girl that day. I, along with my costars, had helped a stranger we thought needed help. What made the episode in which I had starred absurd, though, is not what I did but what that girl and her "writers" and crew don't know. They don't know New York and its people. They don't know that the phenomenon of New Yorkers readily coming to the rescue of others is a common occurrence. Lacking the powers of imagination or insight, they have embraced the wearingly stereotypical notion of the city as an indifferent, selfish place, absent of feeling and empathy. To them, an act of kindness -- a stranger helping another stranger in need -- is so ludicrous as to make for a joke. As a genre, reality TV runs on cruelty, strife, coarseness, humiliation -- but in fact, what they were documenting was a simple act of kindness. I don't know if the show ever aired -- or if my segment made the cut. But I suspect the creators did not see the reality of what they think their reality TV show reveals.

The joke is on them.