From content-farm crap to plagiarized books, junk has invaded the Kindle 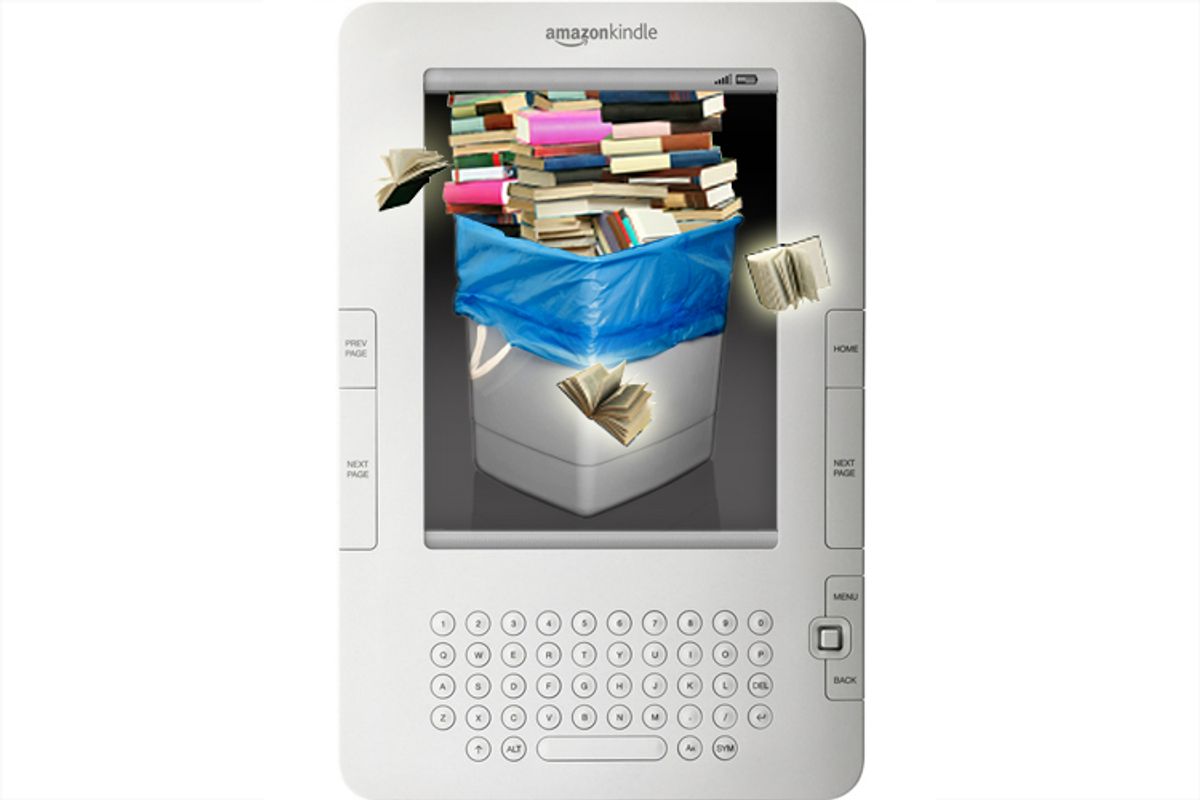 Exactly one year ago, I wrote of my fear that, in the current self-publishing boom, "slush fatigue" -- a form of existential nausea, once suffered only by a few entry-level staffers in the book business, brought on by overexposure to terrible manuscripts -- could infect the general public. How innocent those days seem now! As if slush weren't bad enough, readers looking for a good e-book must now also wade through the same maddening stuff that's been clogging up their email inboxes for decades: spam.

Although this is not news to e-publishing insiders, the proliferation of junk e-books in Amazon's Kindle store became more widely known when a Reuters story appeared last week. Alistair Barr reported that, thanks to a concept known as Private Label Rights (PLR), get-rich-quickers are able to buy large collections of miscellaneous content (from short articles to longer texts) for a pittance. They can then do whatever they want with the texts, from rewriting them, to breaking them down to provide copy for promotional brochures and websites, to reformatting them as e-books under new titles and author names for sale in digital bookstores. With this method, it's possible to "publish" as many as 10 Kindle e-books per day.

As a result, someone looking for an e-book on how to buy a used car or for a collection of low-carb recipes or baby names is likely to find dozens of slightly different versions of the same text, each disguised to look like an original book. Most are sold for 99 cents apiece, and sell no more than a handful of copies, but since the e-books themselves take hardly any time to produce and can always be repackaged to seem like new books, that doesn't really matter. As with all spam, it's about volume.

Most PLR texts seem to be the product of content farms, quickly-written, work-for-hire informational material cranked out by underpaid writers with little more than a passing knowledge of their subjects. It's the same sort of stuff you'll find on ehow.com. The content packages are filled out with public domain material, usually available elsewhere for free, such as old junior league-style cookbooks ("Cat Head Biscuits And Garlic Fried Chicken") and self-help manuals ("Nice Guys, Shy Guys & Good Guys"). Some e-book spammers publish reformatted classic literature that's gone out of copyright, passing themselves off as the "editor."

One of the first to observe this phenomenon is British marketer Mike Essex, who found, in the Kindle store, nearly 3,000 99-cent e-books "created" by one Manuel Ortiz Braschi. Braschi is purportedly the author of "Canvas Painting 101," "40 Ways to Prevent or Get Rid of Stretch Marks," and "Seven Days to Profitable Blogging," among many, many others. When he's not providing this invaluable guidance to the public, Mr. Braschi somehow finds the time to offer his editorial assistance to such authors as D.H. Lawrence, Leo Tolstoy and Georgette Heyer. (Though how he reconciles publishing both "St. Michael The Archangel -- The Prince Of Angels!" and "Lady Chatterly's Lover" is an interesting question.) Since Braschi's oeuvre first came to Essex's attention in March, this authorial dynamo has added nearly 1000 new titles to his oeuvre.

Braschi's customers are, for the most part, unimpressed. "The book isn't formatted for the Kindle and states specifically that it has been downloaded from a public domain," complained one typical review. "It lists a website for free software that doesn't exist ... It's atrocious."

A more cautious shopper would have checked out the free sample chapter offered for most Kindle titles or noted the lack of reader reviews before dropping a buck on this book, but the 99-cent price point is designed to stimulate the what-the-hell center of the brain, luring newbies and the impatient into taking a chance. "Edited" e-book editions of classic texts (for example, Lewis Carroll's "Through the Looking Glass and What Alice Found There") often carry the positive reader reviews earned by the original book. And besides, reviews don't offer readers much protection, since Braschi need only delete and republish a PLR e-book under another title to shed any negative feedback it might have collected.

Why are $1 rip-offs worth getting upset about? Essex, himself an e-book author, says that some of Braschi's reviewers have claimed to be so disillusioned they'll never purchase an e-book again. Others, like Tony Bradley of PC World, worry that there will be "so much spam in the Kindle book store that nobody can find my [legitimately authored] book." Many self-publishers set their prices low to encourage e-book buyers to take a chance on their titles, and e-book spam could end up discrediting the entire field of 99-cent books. Much as your email spam filter is set to screen out every message containing the word "Viagra," a book buyer's mental spam filter could learn to automatically rule out cheap e-books.

Furthermore, junk e-books contribute to the attitude that all writing can be regarded a freely exploitable resource. Content-farm crap is bad enough, but bloggers and e-book authors have also discovered that their work has been published in the Kindle store (sometimes under their name and the original title, but also under different titles and attributed to other authors) without their permission and with the proceeds of any sales going to complete strangers. Ernie Zelinski, who writes work and retirement guides, found that three of his titles had been posted to the Kindle store by a "publisher" named Mingfeng Lai. The self-published author S.K.S. Perry had a similar experience with his novel, "Darkside" and its sequel.

Zelinksi complained to Amazon and, he told me in an email, it took them two weeks to remove the pirated e-books from their store. He's had less luck in persuading them that any copies sold by Mingfeng Lai should be withdrawn from their purchasers and their cost refunded. As he reminded me, Amazon takes at least 30 percent from every sale, legit and otherwise. "Amazon has earned money from my copyrighted material that shouldn't have been on their system," he wrote. "To me, this is totally wrong and definitely not a sign of a company that operates with integrity and decency. I don't care how much of a problem it would be to take the three Kindle e-books from all the purchasers; Amazon should be doing it." He also notes that Mingfeng Lai is still being permitted to sell e-books (apparently PLR titles) in the Kindle store.

An Amazon spokeswoman assured Reuters that the company has "processes to detect and remove undifferentiated versions of books with the goal of eliminating such content from our store." However, Perry was able to upload his own version of "Darkside" without any difficulty, despite the fact that a pirated version of the same novel (with Perry also listed as author) had already been "published" by someone else. (This is less bewildering when you consider that many traditional books have multiple publishers in the course of their existence.) To test the system, Essex published a Kindle book that featured nothing but the phrase "This is the song that never ends" repeated over and over, without formatting, for 700 pages. It "went live" within 24 hours, leading Essex to conclude that whatever automated quality controls Amazon has in place are inadequate.

Do not doubt, either, that book spammers will find their way around plagiarism detectors just as email spammers seem able to defy the most vigilant filters. Take, for example, the supremely banal "How to Plan and Budget a Family Vacation," currently available from the Kindle store in its PLR form as the work of Debra Pauling. Someone named Shafiq Shah has published the same book under the title "How to Manage Holidays With Family," altering the text by running it through some kind of processor, perhaps translating it from English to a foreign language and back again?

Whatever Shah did to "How to Plan and Budget a Family Vacation," the result is a bizarre yet strangely appealing word salad. Behold the opening sentences: "The unit holiday has been portrayed in umpteen ways. From National Lampoon's 'Holiday' showing the trials and tribulations of the Griswold pedigree trying to get to 'Saphead Humans' to 'The Zealous Alfresco' with Gospels Candy and his clan transaction out a cabin in the woods only to showdown a meddling carry." Of course, this isn't much use if you actually want to plan and budget a family vacation, but it does provide a lot more amusement than the original. However, Shah wants $8.99 for the book, compared to Pauling's 99 cents. So I'm not buying either one.

Publishing Trends interviews Mike Essex on "the Kindle swindle" and conveys the result of his experiment in junk publishing.

Ernie Zelinski's experiences as a victim of Kindle plagiarism

S.K.S. Perry recounts his difficulties in getting plagiarized versions of his novels removed from the Kindle store