Gabrielle Giffords has deal for a memoir

Arizona Democrat will work on the book with her husband, who announced his retirement from NASA on Tuesday 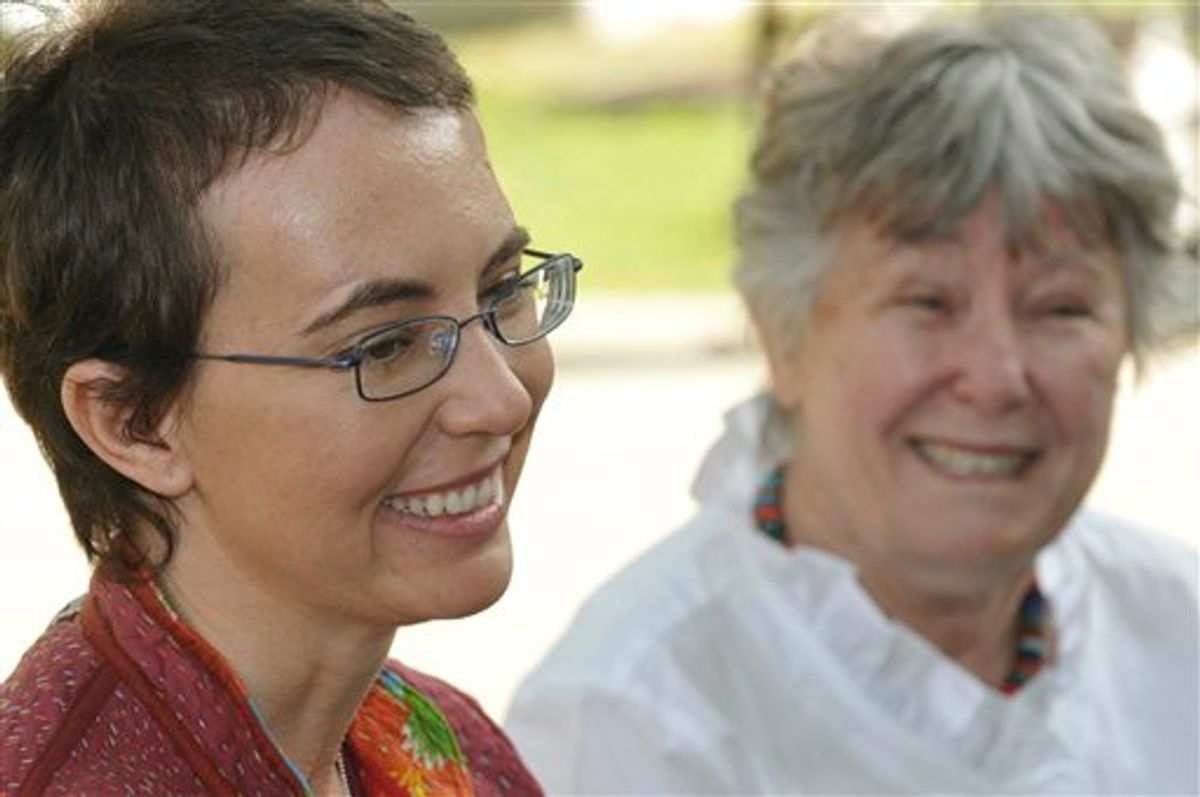 ADDS IDENTITY OF WOMAN AT RIGHT - This, most recent photo of Rep. Gabrielle Giffords since she was shot, was posted to her public Facebook page by her aides Sunday morning June 12, 2011. The woman in the background is her mother Gloria Giffords. The photo was taken May 17, 2011 at TIRR Memorial Hermann Hospital, the day after the launch of Endeavour and the day before she had her cranioplasty.Giffords could be released from a rehabilitation hospital in Houston sometime this month, a top aide says, offering the latest indication that the Arizona congresswoman is making progress in recovering from a gunshot wound to the head. (AP Photo/Giffords Campaign - P.K. Weis) (AP)
--

The world has only begun to learn about Rep. Gabrielle Giffords.

The Arizona Democrat and her husband, astronaut and Navy captain Mark Kelly, are working on a memoir that Scribner will publish at a date to be determined. The book, currently untitled, will be an intimate chronicle of everything from their careers and courtship to the Jan. 8 tragedy when a gunman shot Giffords in the head during a political event in Tucson, Ariz. Six people were killed in the attack and 12 others besides the congresswoman were wounded.

"Since Jan. 8, it's been really touching to us to see how much support there is for Gabby and her recovery, and how much interest there is in how she's doing and her story," Kelly, who on Tuesday announced his retirement from the Navy and NASA, told The Associated Press during a recent interview from Texas.

"After thinking about it, and talking about it, we decided it was the right thing to do to put our words and our voices on paper and tell our story from our point of view."

The 47-year-old Kelly most recently was commander of the space shuttle Endeavour's final mission, which ended June 1. His retirement, which comes as NASA ends its space shuttle program, is effective Oct. 1.

"As life takes unexpected turns we frequently come to a crossroads. I am at this point today," Kelly said in a statement posted Tuesday on his Facebook page. "Gabrielle is working hard every day on her mission of recovery. I want to be by her side."

Giffords, 41, was released from a Houston hospital last week and is set to start outpatient therapy. She had been in the rehab facility since late January, a few weeks after the shooting, and is now living with Kelly at his home in League City, a town 26 miles south of Houston. She will continue outpatient therapy at TIRR Memorial Hermann, the same hospital where she underwent rehabilitation.

Kelly and Giffords are collaborating with author Jeffrey Zaslow, who worked on Randy Pausch's million-selling "The Last Lecture" and Capt. Chesley "Sully" Sullenberger's "Highest Duty." Kelly praised Zaslow as a "good storyteller" and "the best writer" for the kind of book they wanted. Zaslow will interview friends, family members and colleagues of Kelly and Giffords.

"There are details of our personal lives together that I'd say I can count on one hand the people who know them. In some cases, it's just Gabby and I (who know the details)," said Kelly, who met Giffords in 2003 and married her in 2007. Before the shooting, they had maintained independent lives, Kelly based in Houston and Giffords in Tucson.

Giffords will focus on her recovery, but Kelly said that the book will be part of that process and that Giffords will provide details of what "she remembers after Jan. 8 and her story before that." While Kelly will be "the primary collaborator," he said Giffords will be a "big part of this." Giffords has been struggling to relearn how to speak and walk, and will be assisted by a 24-hour home health provider, according to the hospital.

For the book deal, Kelly and Giffords were represented by Washington attorney Robert Barnett, whose clients include President Obama and Secretary of State Hillary Rodham Clinton. The memoir will be edited at Scribner by executive vice president and publisher Susan Moldow, and senior vice president and editor-in-chief Nan Graham.

"I really felt a connection with them and I knew Gabby would, too," Kelly said. "Gabby is very pro-women and she always has been. And I knew after meeting Susan and Nan that they were definitely the right people to work with."

Because of rules covering members of the House of Representatives, Giffords will receive no advance and the deal must be cleared by the House ethics committee. A portion of the authors' net proceeds will be donated to charities that benefit Tucson and Arizona.

Scribner is an imprint of Simon & Schuster Inc.