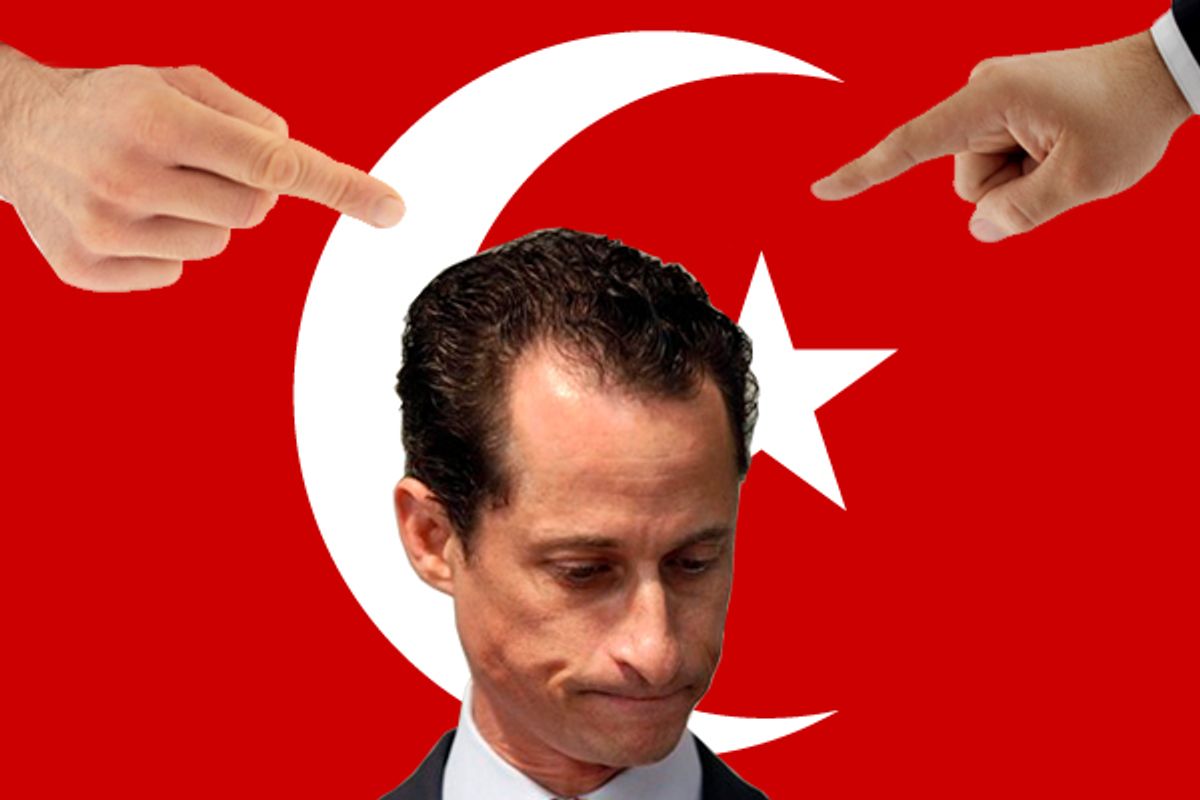 This interview with Robert Spencer, the go-to Islam expert for the right wing, offers a taste of the worldview of the Shariah fear-mongering set:

Frontpage: I would like to talk to you today about Anthony Weiner’s marriage to his Muslim Brotherhood wife, Huma Abedin.

How is it exactly that a Muslim woman connected to the Muslim Brotherhood is married to a Jewish man? Something is not fitting here, right?

Spencer: Jamie, Islamic law prohibits a Muslim woman from marrying a non-Muslim man. A Muslim man may marry a non-Muslim woman, but not the other way around. This is yet another manifestation of Islamic supremacism: the idea is that a wife will become a member of her husband’s household, and the children will follow the religion of the father. Thus, Muslim men marrying non-Muslim women ultimately enriches the Islamic community, while the non-Muslim community must forever be made to diminish.

Consequently, when a non-Muslim man begins a relationship with an observant Muslim woman, he is usually pressured to convert to Islam, and such conversion is made a condition of the marriage. Of course, laws are often honored in the breach, and this is not always true. So while we know that Huma Abedin’s parents were devout and observant Muslims — indeed, her father was an imam — we don’t know what exactly is going on with her marriage to Anthony Weiner.

Certainly the most likely scenario is that Weiner did convert to Islam, as Abedin’s mother, a professor in Saudi Arabia, would almost certainly have insisted that he do so. Weiner has made no public statement of this conversion, but since it would almost certainly have cost him politically if he had announced it, this silence is not any indication that he didn’t actually convert.

However, it is also possible, given the recent scandal involving Weiner’s apparently frequent and sexually charged contact with other women, that the rumors that the Abedin/Weiner union is a political marriage of convenience are true. After all, in 2008, Hillary Clinton was running for president. There were widespread insinuations that she was involved in a romantic and/or sexual relationship with Abedin, her ever-present personal assistant. Those whisperings persisted into Clinton’s tenure as Secretary of State. Abedin’s 2010 marriage to Weiner, at which Bill Clinton presided, put those rumors to rest.

In Islamic law, a Muslim must officiate a marriage ceremony; hence if Bill Clinton was the only one officiating, the marriage was not valid according to Islamic law. Huma Abedin would undoubtedly have known that. Thus, if no Muslim was officiating along with Clinton, Weiner would not have had to convert to Islam, as the whole thing was a charade from the outset, apparently entered into with the full awareness of all parties concerned.

This is the second time we've heard the baseless claim that the very Jewish Weiner might have converted to Islam when he married Huma Abedin.

The important point here is that Spencer is no fringe figure; he's at the very center of the anti-Muslim movement in the United States. His bio describes the impressive access he has to both mainstream and right-leaning media sources:

His articles on Islam and other topics have appeared in the New York Post, the Washington Times, the Dallas Morning News, the UK's Guardian, Canada's National Post, Middle East Quarterly, WorldNet Daily, First Things, Insight in the News, National Review Online, and many other journals.

I asked Spencer about his claim, and he emailed: "If [Weiner] converted, it was almost certainly for convenience, not out of conviction." Spencer also amended his statement that Weiner "most likely" converted to "most immediately obvious":

"'Most likely' is a bit overstated. That is the most immediately obvious scenario, given Abedin's background and self-identification as a Muslim. It is, as is obvious from the rest of what I said, not the only possible scenario," he wrote.