The comeback-seeking star lusts after Justin Timberlake in this sordid, random middle-school farce 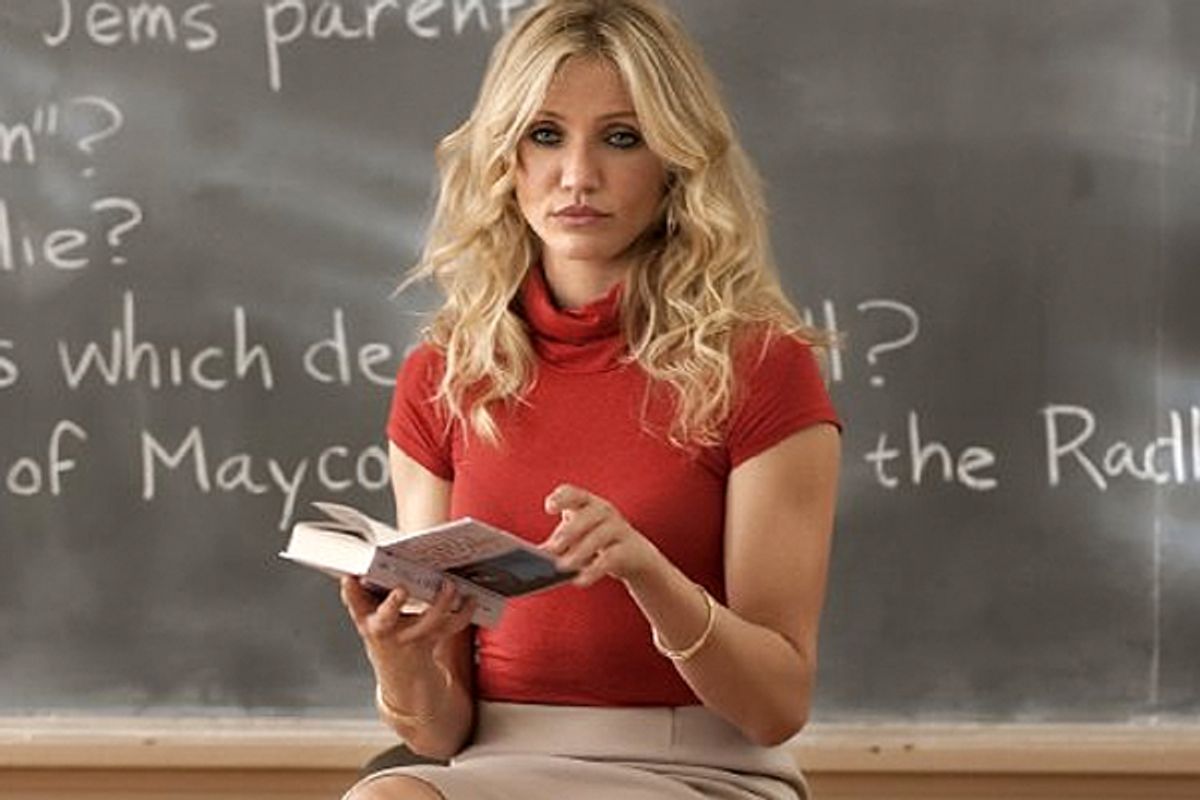 "Bad Teacher" keeps threatening to become entertaining without quite getting there, but it took me a while to realize how truly awful it is. This wannabe-outrageous comedy directed by Jake Kasdan (mostly a TV guy, and also the son of "Big Chill" director Lawrence Kasdan) features an enthusiastic but directionless star performance by Cameron Diaz, who does her best to cover up the inanity of the entire project by blanketing the movie with pep and pulchritude, like a leggy ICBM dropping little nuclear warheads all over the landscape. They don't go off. It's got the wonderful English actress Lucy Punch, trying to rescue her screamingly dreadful role as a perky, New Agey social-studies teacher named Amy Squirrel, who becomes the deadly rival of Diaz's foul-mouthed and venal Elizabeth Halsey. It's got Justin Timberlake in big glasses and preppy clothes, who looks dazed in the headlights while playing a dorky, possibly gay-inflected character meant to poke fun at his own image. It's all just an embarrassment, the kind of pointless slog you'll encounter on Netflix in two years and wonder, How the hell did that get made? At one point I tried to make myself laugh at a scene that features an Abe Lincoln impersonator starting to do the "churn butter" dance.

It isn't the idea of "Bad Teacher" that's the problem, nor is it the casting. Kasdan and his screenwriters (Gene Stupnitsky and Lee Eisenberg, longtime collaborators and producers on "The Office") are trying to go beyond Judd Apatow-land into the kind of zero-taboo, anti-p.c., sacred cow-poking comedy epitomized by "Bad Santa" or "I Love You Phillip Morris." I feel like all these guys have seen "Animal House" one too many times, or 20 too many times, and absorbed only its lessons about absurdity and vulgarity. Believe me, I am not opposed to those things. They have a long and lovely history. But when your storytelling and characterization are this feeble, and your filmmaking this careless, then the contempt for the audience starts to show through the so-called hilarity. Kasdan seems to think that if we get to see Diaz talking about sitting on someone's face, or rolling all over a soapy car in cut-offs and a halter top, Megan Fox-style, or fondling another woman's ginormous fake boobs, then nothing else matters. He might be right. (I realize I just sold a ton of tickets to this movie, and I'm definitely not getting a commission.)

I'm not going to say that "Bad Teacher" is sexist because it portrays Diaz's character as a superficial, slutty gold digger who wants nine grand for new tits and doesn't care about her job or her students. But I'm not exactly expecting the blogosphere and media feminists who fought so hard on behalf of "Bridesmaids" to rush to the barricades in its defense, either. This movie might be sexist in the sense that, beyond a few teensy Diaz flashes, it never makes Elizabeth seem remotely like a human being, just a collection of pseudo-male raunchy talk and inappropriate outfits and stereotypical attitudes. Given how cruelly Kasdan and the scriptwriters treat the rest of the cast, including Punch and Timberlake and Phyllis Smith as a chubby, uncertain fellow teacher, I think the larger problem is not sexism but lameness and stupidity.

Stupnitsky and Eisenberg's incoherent plot begins with Elizabeth coming home to her rich fiancé with a particularly foul-mouthed promise of heavy-duty fellatio, only to discover that he's throwing her out after realizing that she's an avaricious bitch who forgot his birthday. This sends her back to the English-teacher job she just quit at John Adams Middle School, consistently referred to as "JAMS" by its team-spirit principal (John Michael Higgins). I probably wouldn't care about this movie's crypto-right-wing implication that pretty much any patently unqualified moron can get and keep a middle-school teaching job, and that public education is totally bereft of standards or accountability, if it were actually funny. (For uninteresting plot reasons, Elizabeth briefly decides to pay attention to her class, but that part doesn't make sense either. She does not seem capable of reading or caring about "To Kill a Mockingbird," let alone discussing it.) "Bad Teacher" just meanders haplessly from one setup to the next, with the cast desperately riffing in quest of a comic payoff that never arrives. Not counting the nervous "oh, that's supposed to be funny" moments, there might not be more than three or four genuine laughs in the whole thing.

Elizabeth boozes, smokes weed, shows her class repeat viewings of "Stand and Deliver" -- yeah, the contrast, ha -- and fruitlessly competes with Amy for the attentions of super-substitute Scott Delacorte (Timberlake), whose Porsche, expensive watch and effete mannerisms are meant to suggest family money. She lurches from one criminal scheme to the next, arriving at a thoroughly unearned and unmotivated redemption just when you hope she'll go away forever. Diaz is usually a likable if unambitious actress, but she works way too hard here, trying to lend cynical depth to an adolescent spank-book fantasy combination of a hot body, a bad attitude and no brain. Then again, everybody else is played as a stretched and strained comic archetype too -- this is what happens when the deadpan "Office" formula escapes from its half-hour container -- with the solitary exception of Jason Segel as the beefy gym teacher Elizabeth ignores, who comes off as a genial nonentity treading water in a sea of crap. Trust me, that's an improvement.