Bahrain's crackdown: Out of the streets into the courts 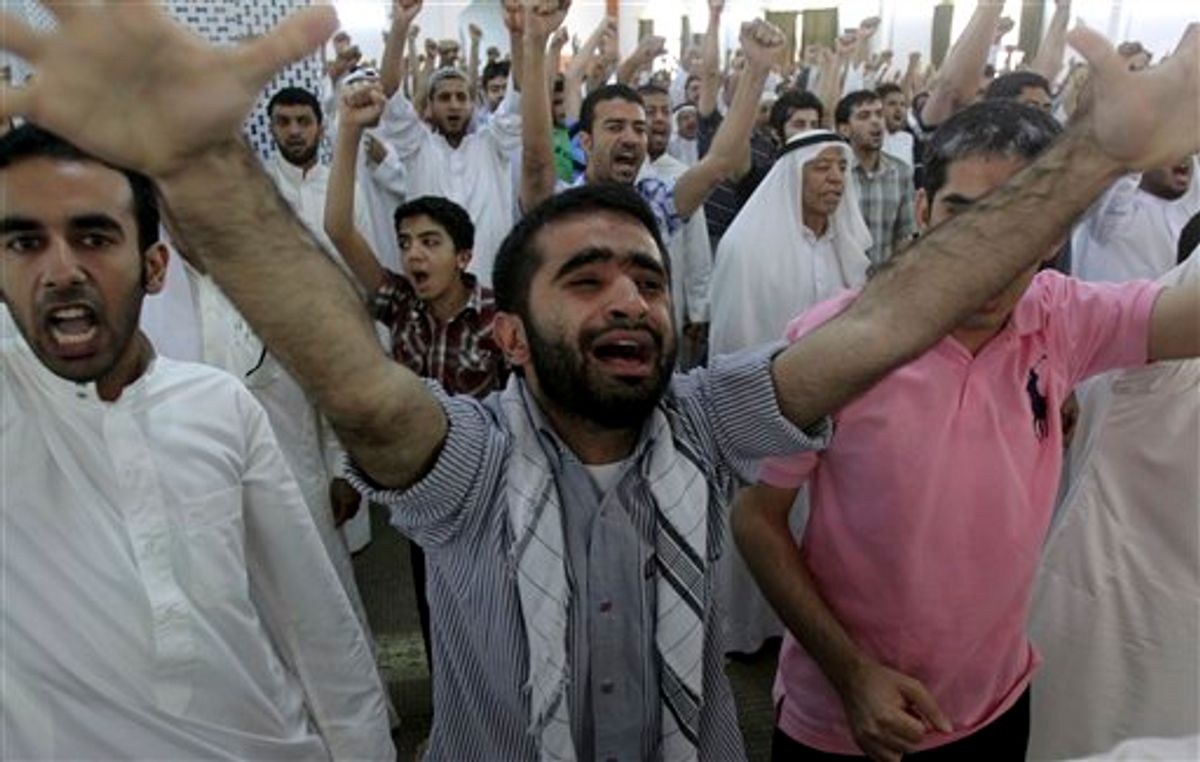 Media attention in the Middle East, focused more recently on Syria and Yemen, returned Wednesday to Bahrain, where eight activists accused of plotting a coup during protests earlier this year have been sentenced to life in prison by a military tribunal. Anti-government groups claim that around 400 people are facing trial for activities linked to the unrest in mid-March (the government contests that the number is smaller).

Who is on trial? The eight activists now facing life sentences are prominent members of Bahrain's political opposition, most of them Shi'ite Muslims who worked earlier this year to demonstrate for the rights of the country's 70 percent Shi'ite majority (which is ruled by a 200-year-old Sunni dynasty). On Wednesday alone, 13 more activists were also sentenced to jail time (between two and 15 years), including Ibrahim Sharif, a secular leftist Sunni, who, the Guardian reports "was accused by a state-run newspaper of having links to 'a foreign country' – a veiled reference to Iran."

Indeed, while there is ample evidence that the popular uprisings in Bahrain were sparked internally by disenfranchised Shi'ites seeking better circumstances, the military tribunal and Bahrain's Crown Prince Salman bin Hamad al-Khalifa, continue to frame the revolts as acts of sedition backed by Shi'ite Iran and Hezbollah.

The military tribunal has already sentenced four activists to death by firing squad for killing a policeman. Twenty Bahraini doctors were also dragged before the court Monday and accused of using government facilities to aid in sedition. The BBC, among others, reported that the medics had likely been tortured into confessing. Robert Fisk from the U.K.'s Independent newspaper wrote, "I saw these brave doctors trying to save lives -- these charges are a pack of lies." Meanwhile hundreds more await trial as a part of this new brand of crackdown -- out of the streets and into the military court.

Why did unrest in the streets die down? This week demonstrations in solidarity with the opposition leaders on trial broke out, but they were small in scale and peaceful. The unrest which began in February (and involved the death of around 30 demonstrators) was soon quelled, as Al-Jazeera reports, when Bahrain "invited Saudi and other Gulf troops in mid-March to help crush pro-democracy protests."

The military tribunal now clearly serves as the new mode of crackdown on opposition groups. As the Guardian reported: "the trials were held despite the government pronouncing the end of three months of martial law earlier this month, which had given the exclusively Sunni security forces extra powers of detention and arrest."

International and U.S. response: For a number of months the United States treated the country with what ProPublica called a "soft touch," with no tough talk or sanctions imposed, despite concerning reports on government activity (such as the bulldozing of Shi'ite mosques and detainment and abuse of Shi'ite women). As of last week, however, The United States put the island state, its Persian Gulf ally where the U.S. Navy's Fifth Fleet is stationed, on its list of human rights violators in the company of Iran, North Korea, Syria and Zimbabwe, to be scrutinized by the UN Human Rights Council.

“The Bahraini government has arbitrarily detained workers and others perceived as opponents,” U.S. Ambassador Eileen Donahoe said in a statement to the council in Geneva.

The military court has continued trials unheeded. And as our own Justin Elliott reported late last week, a U.S. law firm is cashing in:

The Bahraini regime has inked a contract with a high-priced Washington law firm to help fight a labor complaint filed by the AFL-CIO about an under-reported aspect of the crackdown: the firing of hundreds of workers and union leaders for participating in strikes and other pro-democracy actions.

Wikileaks cables from 2008 and 2009 revealed what ABC News called a "cozy" relationship between the United States and Bahrain. It seems unlikely that even draconian military trials will thaw this, given U.S. military and energy interests in the Gulf kingdom.