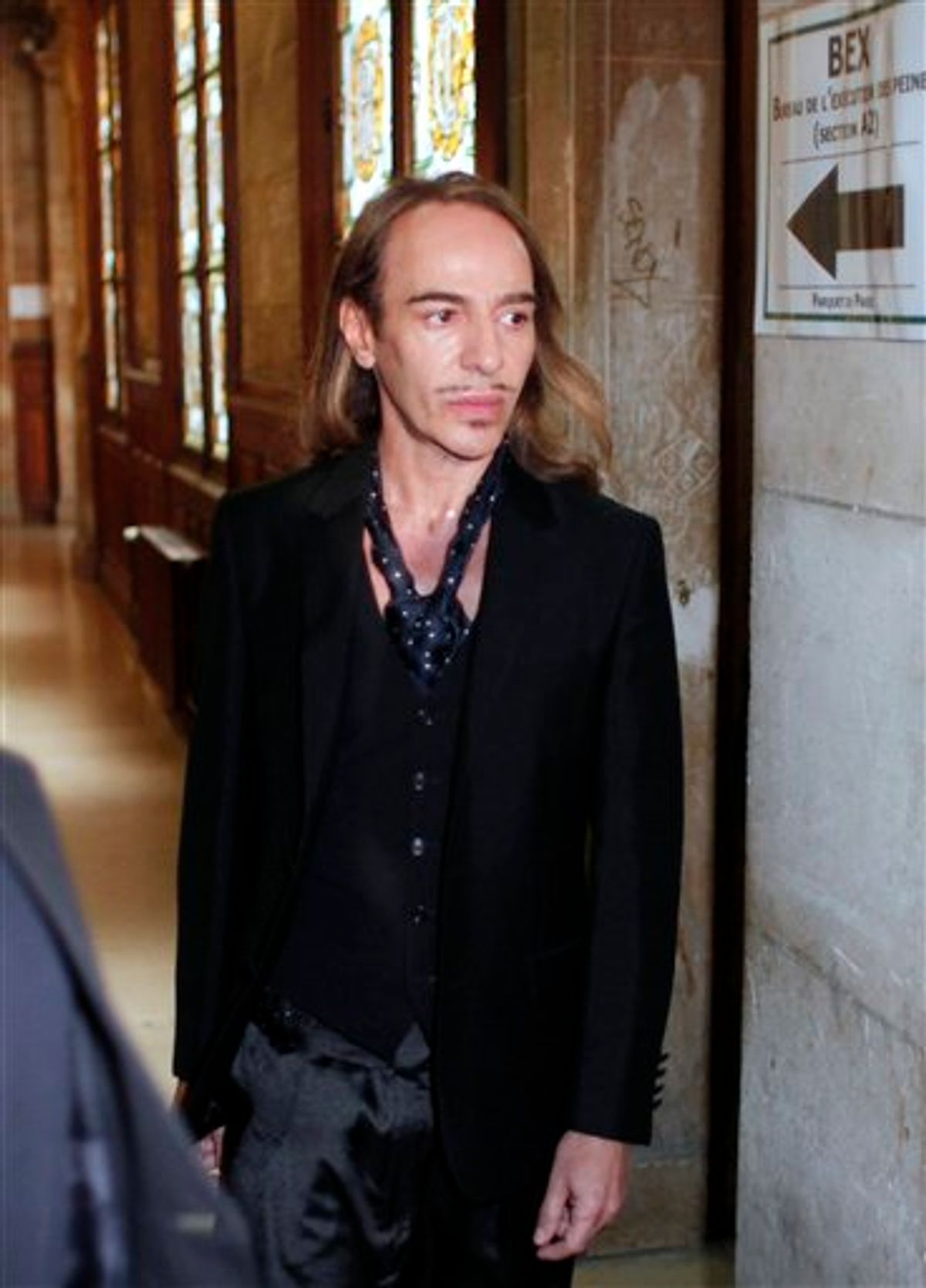 Former Dior designer John Galliano arrives at the Paris court house, Wednesday June 22, 2011, charged with hurling anti-Semitic slurs in a Paris cafe - allegations that shocked the fashion world and cost him his job at the renowned French high-fashion house. Galliano could face up to six months in prison and 22,500 euro ($32,175) in fines. The verdict is expected at a later date. (AP Photo/Thibault Camus) (AP)
--

Prosecutors in France have asked for a fine of no less than euro10,000 ($14,400) for former Dior designer John Galliano who is on trial charged with making anti-Semitic slurs in a Paris cafe.

Galliano testified during his one-day trial Wednesday that he remembers nothing because addictions to alcohol, barbiturates and sleeping pills. He apologized for an anti-Semitic diatribe in a separate incident captured on video and posted on the Internet.

A verdict is expected at a later date.

PARIS (AP) -- Former Dior designer John Galliano took the stand Wednesday and testified that he remembers nothing about allegedly using anti-Semitic slurs at a Paris cafe due to his "triple addiction" to alcohol, barbiturates and sleeping pills.

Galliano, however, apologized for spouting an anti-Semitic diatribe in a separate incident captured in video, posted on the Internet and shown to the court, saying these are not his views but reflect instead "the shell of John Galliano ... someone who needs help."

Charges that the outspoken British designer insulted several patrons of a Paris cafe with anti-Semitic remarks shocked the fashion world and cost Galliano his job at the renowned French high-fashion house.

Galliano's appearance at the one-day trial put him in the public eye for the first time in months. In a conservative look for him, Galliano was dressed in black with a polka dot neckerchief, sporting a pencil mustache and long hair.

The 50-year-old designer is charged with "public insults based on origin, religious affiliation, race or ethnicity" and could face up to six months in prison and up to euro22,500 ($32,175) in fines. The verdict is expected at a later date. French law prohibits public insults toward others because of their origins, race or religion.

Journalists, including fashion writers, packed the wooden benches in the paneled, gilded courtroom, which features a high ceiling painted with a woman holding the scales of justice. Television cameras were not allowed but zoomed in on Galliano as he went inside.

The famed designer was escorted to a front-row seat at the Justice Palace courtroom, sitting next to an interpreter as he faced the three judges who will decide his fate.

Presiding Judge Anne-Marie Sauteraud asked about the evening of Feb. 24, when Galliano allegedly derided a couple with anti-Semitic insults.

Galliano repeatedly said he remembered nothing.

"I have a triple addiction. I'm a recovering alcoholic and a recovering addict," he testified in English when asked why his memory was blank. He said he started drinking in 2007 and became addicted to alcohol, barbiturates and sleeping pills.

After his detention by police in February, Galliano said he underwent rehabilitation treatment in Arizona for two months and also in Switzerland.

"After every creative high, I would crash and the alcohol helped me," he said, adding that his creativity "helped make Dior a billion-dollar business."

Asked why he didn't tell police investigators about his addictions, Galliano responded: "I was in denial. I was still taking those pills and alcohol, and I was in complete denial."

A couple contends that Galliano made anti-Semitic comments to them in the cafe in February. Galliano was taken in by police for questioning, and a sobriety test showed he was drunk. Another woman then came forward with similar claims about another incident in the same cafe in October. Both accusations were being addressed at Wednesday's trial.

Days after the February incident, a video was broadcast on the website of the British tabloid The Sun showing an inebriated Galliano insulting a fellow cafe client, slurring: "I love Hitler."

The court asked the designer about the anti-Semitic views he spouts in the 45-second-long video.

"These are not views that I hold or believe in," he said. "In the video, I see someone who needs help, who's vulnerable. It's the shell of John Galliano. I see someone who's been pushed to the edge."

"All my life I've fought against prejudice and intolerance and discrimination because I have been subjected to it myself.

"I apologize for the sadness that this affair has caused and I apologize to the court as well," Galliano said.

One member of the couple allegedly insulted, Geraldine Bloch, told the court that Galliano pronounced the word "Jewish" "at least 30 times" in the approximately 45-minute-long altercation.

Asked why, in their statements, no one else at the cafe appeared to have heard Galliano say the word Jewish, Bloch replied, "I am very surprised."

"He didn't say it any softer or louder than the other commentaries," she said.

When asked if the designer appeared to be drunk, Bloch responded, "I don't know if he was drunk but he was behaving completely strangely."

Judges then asked why she remained seated next to him. Bloch said he had upset her so much with his "gratuitous insults," that staying there became a "question of principle" for her.

Another patron of the cafe, 30-year-old English teacher, Marion Bully, was called as a defense witness. Bully said she was surprised that instead of changing tables, the couple ordered another drink.

"It was very difficult to tell who had insulted whom," she told the court.

Galliano repeated a litany of insults, including "Shut up," "You're ugly" and others with four-letter words, Bully told the court.

"(But) I absolutely didn't hear anything anti-Semitic," she testified, adding she thought the altercation was "totally overblown."

Galliano described his increasing work loads at Dior and his signature label, John Galliano, due to the financial crisis. "They kept me very busy," he said, adding that he had not had time to mourn after the 2007 death of his right hand man, Stephen Robinson, and the 2005 death of his father.

His lawyer, Aurelien Hamelle, told The Associated Press earlier that the designer's comments were "misplaced and hurtful" but attributed them to Galliano's addition to alcohol and prescription drugs.

Galliano issued a statement at the time saying: "Anti-Semitism and racism have no part in our society. I unreservedly apologize for my behavior in causing any offense." He also said he was "seeking help" for personal failures.

If the court determines that the insults against the victims were heard by other people, it would be a crime and a conviction could lead to a prison term. If such insults were not witnessed, they would only amount to a petty offense and be punishable by a fine.

The February cafe incident and the video reverberated throughout the fashion world because they became known on the eve of Paris Fashion Week. Dior fired Galliano after 14 years with the company and denounced his comments.

After joining the company in 1996, Galliano made an indelible mark on the storied house, with theatrical, often outrageous, runway shows that were among the most-anticipated displays on the Paris fashion calendar.

The trial is being held on the opening day of another round of Paris fashion shows, the menswear spring-summer 2012 collection.