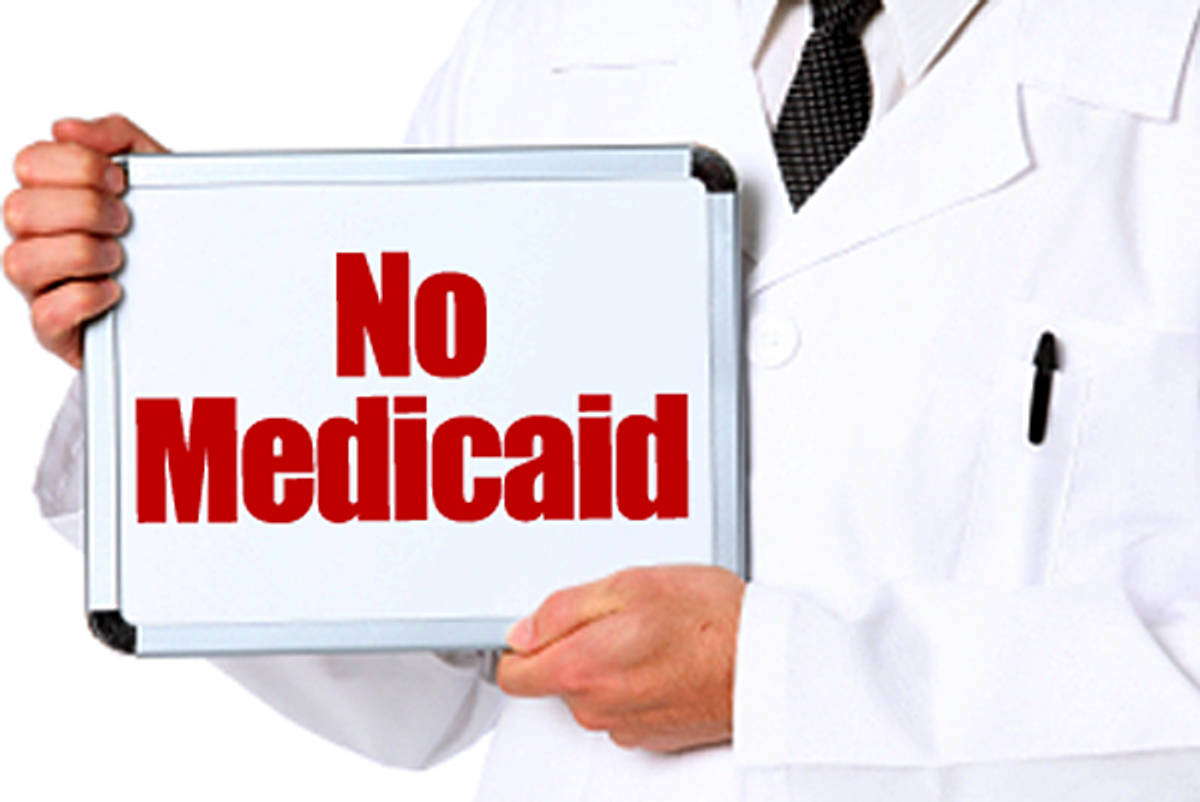 At a legislative level, the political crusade to reduce government "to the size where they can drag it into the bathroom and drown it in the bathtub" is brilliantly self-sustaining. Both Republicans and conservative Democrats hold up the evils of "Big Government" (read: the non-military/security parts of government) as the rationale to reduce resources for popular programs and when those underfunded programs subsequently underperform, they cite the failure as reason to further demonize government, thus beginning the whole cycle anew.

This now-standard and now-bipartisan Neoliberal Formula is sophistry masquerading as tautology -- and it has profound real world effects. The latest example of that truth comes from a new University of Pennsylvania report that exemplifies how the formula has helped embed an insipid "Separate and Unequal" doctrine within America's healthcare system.

Published in the New England Journal of Medicine, the Penn study had researchers pose as parents calling physician specialists in Cook County, Ill. The only variable in the calls was insurance status -- some callers said they had public insurance, others said they had private insurance. Here's what they found:

Sixty-six percent of publicly-insured children were unable to get a doctor's appointment for medical conditions requiring outpatient specialty care including diabetes and seizures, while children with identical symptoms and private insurance were turned away only 11 percent of the time... The study also found that [publicly]-insured children who received an appointment faced longer wait times to be seen.

These numbers are particularly striking, said the Penn researchers, "given the association between socioeconomic disadvantage and poor health status" -- an association which means kids covered by public insurance have a disproportionately greater need for specialty care than their privately insured counterparts.

The connection between the Neoliberal Formula and kids being discriminated against on the basis of insurance type is rooted in reimbursement rates paid to physicians.

As both parties have used anti-government arguments to slash taxes, public revenues have predictably dried up. With states under statutory obligation to balance their perpetually strapped budgets, Medicaid reimbursement rates have been regularly put on the chopping block in legislatures, creating ever-widening disparities between what physicians are paid by private insurance and what they are paid by public insurance. (For instance, in Illinois, where the study was conducted, researchers found "an office consultation visit for a problem of moderate severity is reimbursed at $99.86 by Medicaid-CHIP, whereas the average reimbursement for the same code by a commercial preferred-provider organization is approximately $160.") Considering the ugly economics, it's no surprise physicians are less eager to accept public insurance patients.

Hence, the Separate and Unequal disparities -- disparities that will likely be cited by Republicans in Washington as proof that public insurance programs are inherently bad and therefore need to be even further defunded. Indeed, the infamous Ryan Budget proposes big cuts to Medicaid and the Children's Health Insurance Program that would likely result in further reductions in reimbursement rates.

And so the cycle, the disparities and the Neoliberal Formula continue in perpetuity. As I said, it's a brilliantly self-sustaining ideology, proving that in the era of paradox politics, self-sustaining and self-destructive often go hand in hand.