"If a Tree Falls": Understanding the era of "eco-terrorism" 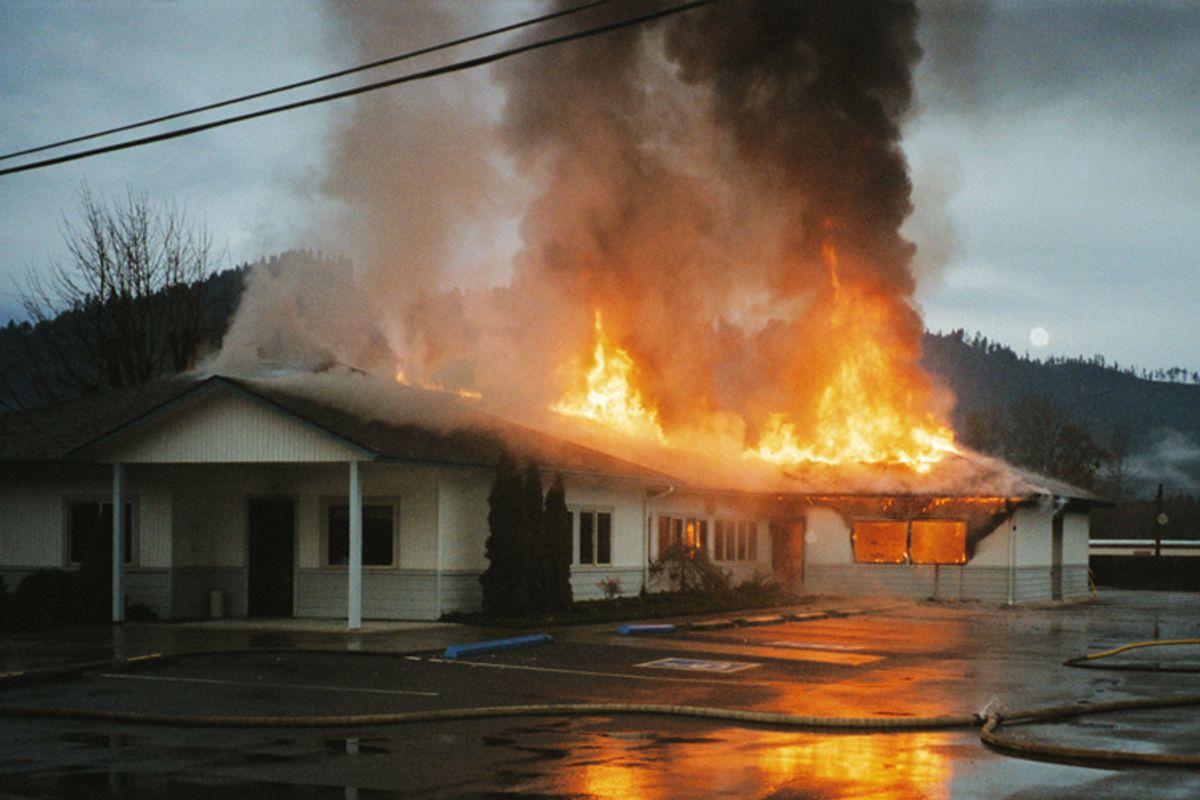 Radicals perform a social function that they themselves often view with contempt, and one that is similarly misunderstood by people in the political mainstream who almost always see radicalism as crazy and counterproductive. People who chain themselves to old-growth redwoods -- or, for that matter, to the doors of abortion clinics -- hardly ever get what they want in the short or medium term, since what they want is generally unrealistic, and often amounts to a revolutionary change in the social order. But in posing an unrelenting and quixotic challenge to the consciences of their fellow citizens, radical activists often nudge us along toward more modest, incremental changes. Does anyone dispute that facts on the ground with regard to environmental policies and abortion rights have changed, thanks in part to the actions of activists many people view as deranged?

I'm not trying to claim that the shadowy alliance of underground environmental radicals known as the Earth Liberation Front were (or are) a constructive force; taken as a whole, their actions were idiotic and vainglorious. But I am trying to sneak up on Marshall Curry's fascinating new documentary, "If a Tree Falls: A Story of the Earth Liberation Front," because it takes on a complicated subject that calls forth an unfortunate wealth of received opinion and knee-jerk reaction. Curry, whose Oscar-nominated "Street Fight" explored a nasty mayoral election in Newark, N.J., is to be commended for surrendering to neither. "If a Tree Falls" is a remarkably evenhanded story about an eager young activist who was drawn down a slippery slope toward property destruction and violence, and who wound up as a baffled defendant in a widely publicized federal terrorism case. Those eager to defend the motives and ideology of the ELF will be made uncomfortable, and so will throw-away-the-key viewers who view the group as a hippie-flavored answer to al-Qaida.

During its brief heyday as an underground direct-action movement in the late '90s and early 2000s, the ELF was simultaneously the subject of massive media hype and widespread incomprehension. Daniel McGowan, the young man at the center of "If a Tree Falls," was involved with an ELF cell operating in and around Eugene, Ore., which committed various arson attacks on perceived environmental evildoers in the Northwest. These ranged from a Forest Service ranger station to a slaughterhouse where wild horses and burros were rendered into dog food to a timber company to a Ford dealership. If that makes it sounds as if the group's rationale was all over the place that's exactly right, but let's not get ahead of the story. Since ELF was conceived as a "leaderless collective" of autonomous cells, McGowan's group presumably had no connection to a series of ELF attacks in Minnesota, Michigan, Wisconsin and Indiana, nor to the suburban arson fires set in San Diego or on New York's Long Island. (Who exactly committed the ELF's most famous arson attack, the 1998 torching of five buildings at the Vail ski resort in Colorado, causing at least $12 million in damage, is a disputed question.)

Curry came to this film with no particular knowledge of environmental activism or its underground component, which may be for the best. Purely by chance, McGowan was working for Curry's wife in New York when he was arrested by the FBI in December 2005. In fact, this is a sterling example of journalistic documentary, clearer, fairer and more engrossing than any of the sensationalistic newspaper or magazine stories about ELF. Curry spends a lot of time with McGowan and his family, which is almost the opposite of what you'd expect from an accused eco-terrorist. McGowan grew up in middle-class, Irish-American Queens, and his father is a retired New York police detective. By his own account, McGowan's environmental awakening happened not in the wilderness but at Wetlands, a now defunct nightclub in downtown Manhattan.

Curry spends time with several other ELF members, including McGowan's ex-girlfriend Suzanne Savoie (who spent nearly four years in prison) and the notorious Jake Ferguson, a charismatic founder and leader of the Eugene cell who subsequently turned police informant and wore a wire to incriminate McGowan and others. "If a Tree Falls" includes archival footage of many ELF attacks and visits to most of the sites, including interviews with the befuddled owners of a lumber mill and a tree farm that were burned to the ground. The filmmaker also has revealing conversations with assistant United States attorney Kirk Engdall and Eugene police detective Greg Harvey, who led the four-year ELF investigation that culminated with the arrest of McGowan and many other suspects -- and both have a more nuanced understanding of the group than you might expect.

Most important of all, Curry pushes backward into the heady, crazy world of recent activist history, before the ELF started grabbing headlines around 1998. (He's aware, furthermore, that you can go back still further, to Dave Foreman and the founding of Earth First!, or to Edward Abbey and "The Monkey Wrench Gang." This is one movie, and it doesn't claim to be comprehensive.) Those years saw an escalating series of confrontations in the Pacific Northwest between activists, timber companies and law enforcement officials, who began to use increasingly brutal methods to deal with nonviolent civil disobedience. As you'll see in the film, cops sometimes beat and mauled activists engaged in such time-honored tactics as lockdowns or tree-sits, and frequently maced resisters at close range or daubed pepper spray directly in their eyes with cotton swabs. After a 1997 tree-sit at a park in downtown Eugene led to a violent police crackdown, the town's long-standing community of anarchists and left-wing libertarians began to coalesce around more radical possibilities.

McGowan, Savoie, Ferguson and other Eugene activists played roles in the "Battle of Seattle" in 1999, when the World Trade Organization conference collapsed amid widespread protest and rioting. By that time they were already the central nexus of Eugene's ELF cell, which became identified by the FBI as the most dangerous domestic terrorist group in the U.S. Activists have accused the government of using the activities of a handful of radicals to foment a widespread "Green Scare," and one can definitely argue that the word "terrorist" doesn't fit ELF, whose attacks were meant to cause economic damage but not to spread fear or inflict civilian casualties. (No one was ever injured in an ELF fire.) As someone in the film observes, "terrorist" is always a political term of art, which in practice means "someone who uses force in service of a goal we don't support." Your terrorist is somebody else's freedom fighter.

Curry captures the rush that ELF members got, for instance, from burning down that horse-butchering facility, which was never rebuilt or reopened. But the media seized on ELF as a hot story and the group almost instantly became seduced by its clandestine, badass reputation, meaning that the supposed original goal -- educating the public about the evil actions of corporations and government -- evaporated completely. ELF members became highly skilled at staging arson fires and covering their tracks; several years and millions of dollars were expended before the FBI "turned" Jake Ferguson and broke the case. But the actions themselves went from borderline-counterproductive to flamingly stupid: In May 2001, McGowan's cell firebombed the Center for Urban Horticulture at the University of Washington in Seattle, causing $7 million in damage to an eco-friendly research facility under the mistaken impression that the center engaged in genetic engineering. Simultaneously, an ELF cadre burned down a tree farm in rural Oregon, one that grew hybrid poplars using conventional methods used in agriculture for centuries, if not millennia.

McGowan suggests to Curry that his ELF cell blew apart not long after that, partly out of regret over those mistakes but also because some members suggested the possibility of going after human targets (something that I don't think has been attested elsewhere). One thing is for sure: After September of 2001, the national climate shifted dramatically and the ELF's bush-league experiments in terrorism, with or without scare quotes, stopped seeming like fun to anybody. You can find several different warring websites claiming to represent the remnants of ELF, and people still commit "actions" in its name, if you want to glorify acts of petty vandalism at shopping malls and auto dealerships with that word. Daniel McGowan will be eligible for release from federal prison in a couple of years, and if there's a lesson to be learned from the thorny history of his brief but stellar career as an eco-terrorist, I don't think he, or any of the rest of us, has learned it yet.

"If a Tree Falls: A Story of the Earth Liberation Front" is now playing at the IFC Center in New York. It opens June 23 at the Bijou Cinemas in Eugene, Ore.; July 9 in Olympia, Wash.; July 15 in Denver, Los Angeles and San Francisco; July 22 in Minneapolis, San Diego and Seattle; and Aug. 12 in Washington, with more cities and dates to be announced.