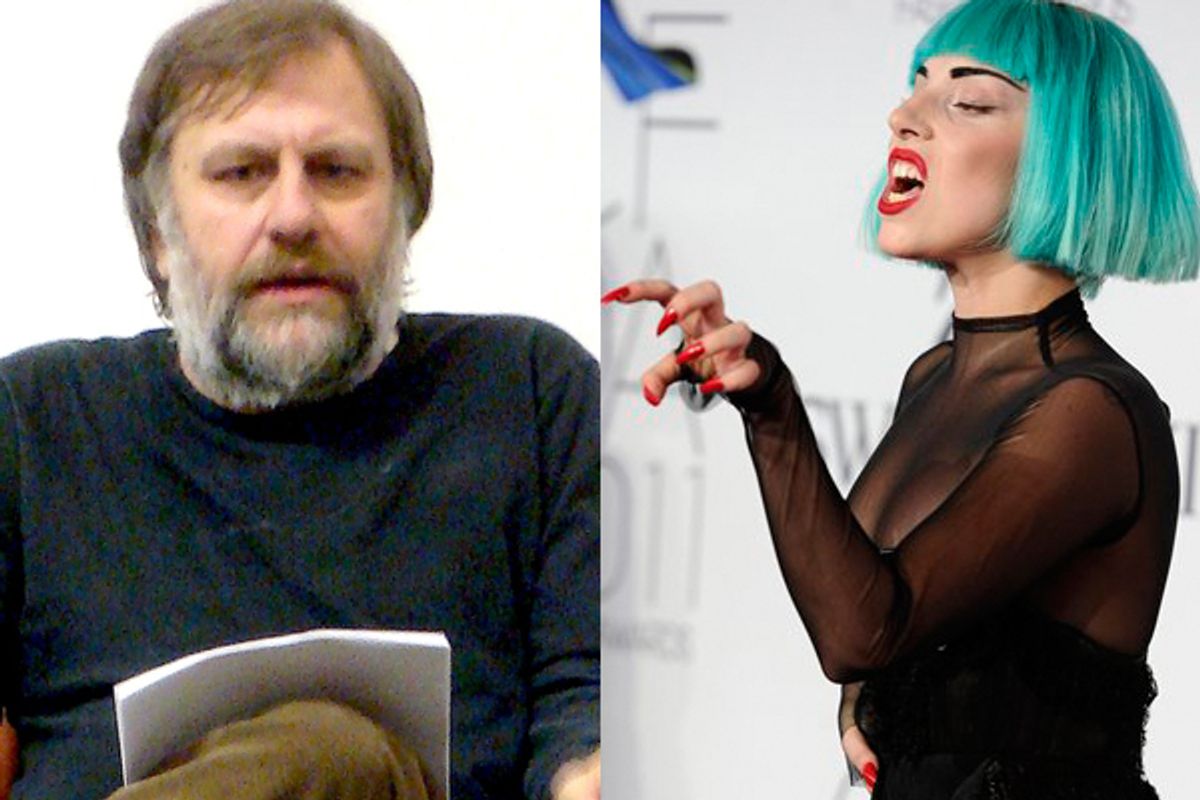 Man, Slavoj Zizek is really getting around these days! Just last week we heard about Julian Assange auctioning a lunch and panel with himself and Zizek on eBay in an attempt to fund WikiLeaks (the first ticket went for 3,700 euros, FYI). On Monday the Slovenian professor was outed in the New York Post for spending quality time with Lady Gaga:

In a recent blog post titled "Communism Knows No Monster," Zizek called Gaga "my good friend" and said, "There is a certain performance of theory in her costumes, videos and even (some of) her music." He says her infamous meat dress is a reference to "the consistent linking in the oppressive imaginary of the patriarchy of the female body and meat, of animality and the feminine."

According to the story, the two were also spotted by various sources discussing feminism and collective human creativity, with the "Born This Way" singer promising to support Zizek's rally last March when the lecturers' union went on strike in London.

The only problem? At least half this story was totally fabricated. Yes, that "Communism Knows No Monster" post was actually a hoax by London's Deterritorial Support Grouppppp. The group is like a combination of the Internet's Anonymous and a "seemingly Situationist-inspired" art collective, according to ArtInfo.com, which revealed the prank yesterday.

But the infamous gossip crew at Page Six is not quite ready to give up on the story yet. Though they quoted Zizek at the end of the piece saying, "I am terribly sorry to disappoint you, but this is all a fake!" they haven't issued a retraction. Perhaps because their other sources are still valid? After all, Zizek mentioned to the Post that Gaga did in fact support him in the London strike ... so there may be a kernel of truth in this story after all.

UPDATE: We contacted Mr. Zizek by email regarding the "Communism Knows No Monster" post that ran in Deterritorial Support Grouppppp, asking whether or not those were his words. Here is his response:

"I have ABSOLUTELY NOTHING to do with that blog. Incidentally, there are some facebook sites etc. which claim to speak in my name - they are ALL fake, I NEVER participated in any of the twitter/facebook bullshit."