Updated: Incident is the latest sign that the country's upheaval has emboldened members of the terrorist group 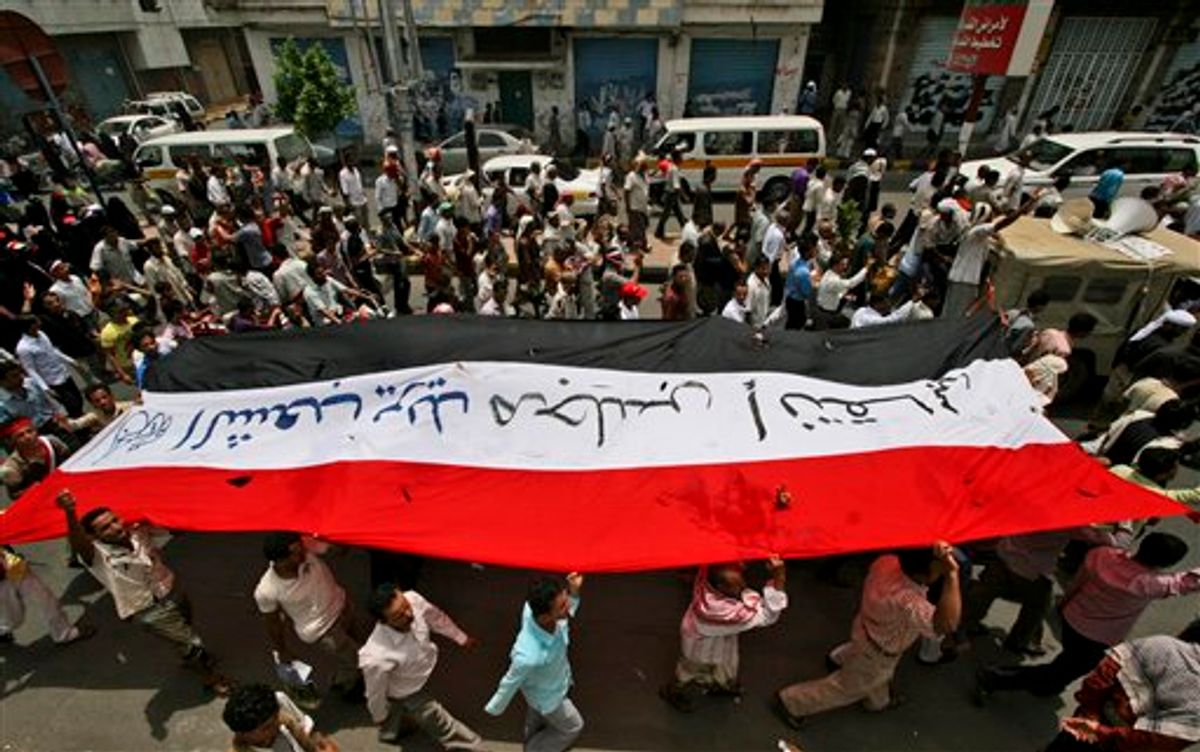 Anti-government protestors hold up their national flag, bearing the words "The people want a transitional council" in Arabic, during a demonstration demanding the resignation of Yemeni President Ali Abdullah Saleh, in Taiz, Yemen, Monday, June 20, 2011. Tens of thousands of Yemenis have taken to the streets of the capital, demanding that the president's son leave the country. Ahmed Saleh, 42, is a one-time heir apparent who commands the elite Yemeni Presidential Guard. The force has been leading the crackdown on pro-democracy demonstrators since the uprising began in February. (AP Photo/Anees Mahyoub) (AP)
--

Security officials say 57 militants, mostly from al-Qaida, have escaped from a prison in southern Yemen.

They say the 57 were among 62 inmates from the Mukalla jail in the Hadarmout province who escaped Wednesday through an underground tunnel.

Bands of gunmen attacked the prison simultaneously, opening fire on the guards from outside to divert their attention away from the escape.

One guard was killed and another wounded in the attack, said the security officials, who spoke on condition of anonymity because they were not authorized to speak to the media.

Wednesday's escape was the latest sign that Yemen's months-long upheaval has emboldened al-Qaida militants to challenge authorities in the country's nearly lawless south.

SANAA, Yemen (AP) -- The head of Yemen's most powerful tribal confederation warned Tuesday in a letter to the Saudi king that Yemen could plunge into civil war if President Ali Abdullah Saleh is allowed to return home.

Saleh is currently in Saudi Arabia, where he is receiving treatment for serious injuries from a blast early this month at his palace in the Yemeni capital that left him with severe burns and chunks of wood in his chest.

In his message to King Abdullah, Sadeq al-Ahmar, the influential tribal chief who was an ally of Saleh before switching sides to join the opposition, appealed to the Saudi monarch to prevent Saleh from returning to Yemen.

"His return will lead to sedition and civil war," al-Ahmar said, according to an aid to al-Ahmar. Saudi Arabia is a key player in Yemen, and has pressed Saleh in the past to negotiate a settlement to Yemen's political turmoil.

Late Tuesday, al-Ahmar had his first meeting with Vice President Abed Rabbo Mansour Hadi since Saleh departed, a possible step toward resolving the conflict. Maj. Gen. Ali Mohsen al-Ahmar, a general who defected to the opposition and deployed his units to defend protesters, took part in the meeting. Hadi is the acting president. He is under pressure to agree to a new government that effectively freeze Saleh out.

The tribal chief's aide said that they discussed steps to implement a cease-fire and withdraw forces from the streets. They also discussed "possible means to exit the current crisis," according to the aide, who spoke on condition of anonymity because he was not authorized to speak to reporters.

Hundreds of thousands of Yemenis, inspired by uprisings elsewhere in the Mideast, have been protesting daily since late January, demanding the ouster of Saleh, who has ruled Yemen for nearly 33 years. Their campaign has been largely peaceful, but fighting erupted in Sanaa between Saleh loyalists and fighters from al-Ahmar's powerful tribal confederation, the Hashid, after troops moved to attack al-Ahmar's residence.

The opposition on Tuesday accused Saleh's inner circle and family of hindering the opposition's dialogue with Hadi.

"Saleh's sons are not helpful in solving the problem, and they don't help the acting president to exercise his constitutional powers," opposition spokesman Abdullah Oubal said.

Yemen's opposition parties have sought to persuade Hadi and Saleh's ruling party to join them in a transitional leadership that would effectively shut out Saleh, who has resisted tremendous pressure at home and abroad to step down.

The president's son Ahmed, who commands the country's best trained military forces, the Republican Guard, and is the main force maintaining his father's grip on power, opposes such discussions.

Saleh's close aide and adviser, Abdul-Karim al-Iryani, arrived Tuesday in Riyadh for talks with Saleh, who requested the meeting. A leading member of the ruling party, commenting on reports that Saleh and al-Iryani were discussing a transfer of power, said he expected "very important decisions" to come out from the meeting.

He spoke on condition of anonymity because of the sensitivity of the issue.

The United States fears that Yemen's power vacuum will give even freer rein to al-Qaida's branch in Yemen, which Washington believes is the terror network's most active branch. Already, Islamic militants -- some suspected of ties to al-Qaida -- have taken control of at least two areas in the rebellious southern province of Abyan.