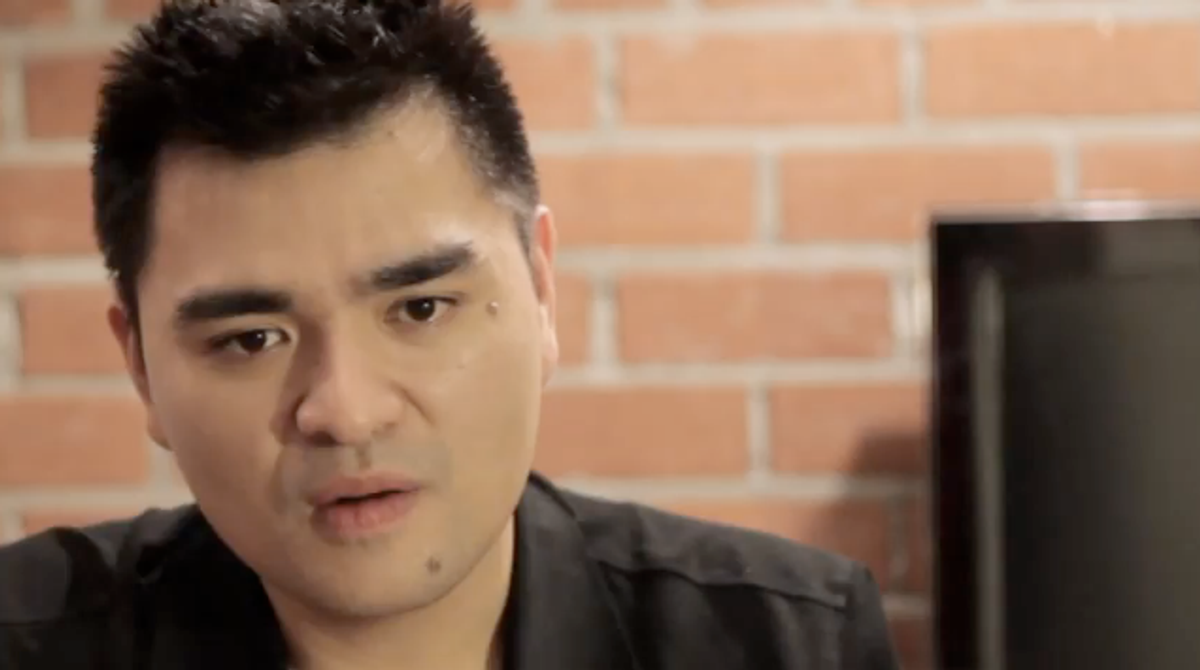 Former Washington Post journalist Jose Antonio Vargas -- who won a Pulitzer Prize with the paper for his reporting on the Virginia Tech tragedy in 2007 -- made a shocking admission this morning: He's an illegal immigrant.

Vargas made the confession by way of a remarkable personal essay in the New York Times Magazine, titled "My Life as an Undocumented Immigrant." His story began at the age of 12, when he emigrated from the Philippines to live with his grandparents in California. At the time, Vargas says, he didn't know anything was amiss. He says he discovered his illegal status at 16, when he went to the DMV to obtain a learner's permit -- only to be informed by a staffer there that his green card was forged.

Still, he continued to assimilate, became a leader in his high school, and earned a scholarship to San Francisco State University. Later came newspaper internships, culminating with a post-grad offer from the Washington Post. Along the way, he cautiously built a network of sympathetic figures who knew his secret and helped him to maintain the facade of citizenship. He's gone on to build a career for himself as a star journalist, though he says he always felt uncomfortable with the deception.

What finally compelled Vargas to come clean? He says two factors led to his decision: The first was the immense personal toll the secret took. The second was to openly advocate for passage of the decade-old DREAM Act, which would provide a path to citizenship for undocumented immigrants brought to America at a young age, provided they complete their high school education.  Vargas quietly left his post as a senior contributing editor at the Huffington Post last year, and has since founded Define America, a nonprofit organization devoted to raising awareness about immigration reform.

Illegal immigration being the political lightning rod it is, Vargas' admission was always destined to galvanize a wide range of reactions. Many have lauded the journalist for his courage, exposing himself to the possibility of deportation. (Says Noreen Malone at New York magazine: "The bar just got a whole lot higher for describing personal essays as 'brave.'")

On the other hand, Daniel Foster at the National Review is less forthcoming with adulation:

Liberals are coming out of the woodwork to call Vargas’ confession [...] courageous and pioneering. It is certainly the former, and may turn out to be the latter. But in their rush to praise Vargas[...] they conveniently leave out that at the beginning of his story is not one but a series of crimes.

The first part of Vargas’ story -- a kid living and loving America for years before his shocking discovery that he has been made complicit in a crime -- does indeed elicit sympathy. It’s stories like these that make me open, at least in principle, to something like a narrowly-tailored version of the “DREAM” Act. But the second part of his story, in which a fear- and shame-driven Vargas [...] perpetuated and compounded those crimes, [...] elicits from me nothing like the outpouring of support Vargas is already enjoying on the Left.

(We'll keep updating this story as responses from the political commentariat continue to trickle in.)

Vargas says he's been working with attorneys to tackle the legal challenges he's now almost certain to face. Whatever the outcome, though, he stands defiant against those who would disparage him for his actions. Sitting down with ABC News this morning, Vargas said: "You can call me whatever you want to call me, but I am an American. Nobody can take that away from me."

UPDATE: More reactions to Vargas' confession are pouring in. Many, but not all of them, positive.

Matt Yglesias at Think Progress called the Times piece a must-read, and said the warmth with which Vargas has been greeted by many should translate even to those undocumented immigrants who weren't unwillingly spirited into the country:

But of course even though they don’t quite make for as good a sob story, even people who come over here illegally as adults knowing full well what they’re doing ought to be regarded with sympathy.

He may have a Pulitzer, but that doesn’t change the fact that the law has been ignored. Going on television to flaunt the fact he knowingly dodged the law, ostensibly lied to his employers, committed identity fraud, etc. did little to assuage my resentment having come from a family who came to America by knocking on the front door, not sneaking in the back.

Others, like Slate's libertarian-leaning columnist Jack Shafer, wonder how much Vargas' employers knew, when they knew, and what kinds of legal repercussions they might now face. Shafer tweeted:

Did Vargas put his employers at the Wash Post and the HuffPost on the hook for breaking the law?

And, in fact, one of Vargas' former exmployers has been dragged back into the spotlight over the story. The Washington Post, it turns out, had originally been working with Vargas on the story for their weekend Outlook section, but ultimately decided against running it. While no one is entirely certain why they axed the essay -- and the Post hasn't really elaborated on the decision, it's worth noting that the newspaper did play a fairly substantial role in the piece. Said to The Huffington Post's Michael Calderone:

Vargas writes how assistant managing editor Peter Perl, then the director of newsroom training, knew about his undocumented status and kept that fact hidden during the journalist's tenure. It's unclear whether a Post manager's role could have led to the paper not running the story (which undoubtedly would have found a home elsewhere and did).

Coratti said that "what Peter did was wrong," but declined to discuss individual personnel matters.

The ramifications of the story for the Posts (both Washington and Huffington) remains unclear. But the Atlantic Wire's John Hudson shed some light on what sort of action Vargs himself is likely to encounter, by way of an interview with immigration lawyer David Leopold:

I think he has taken a huge personal risk by coming forward. [...] For example, he admits that he checked 'U.S. citizen' on his I-9 forms. This is a serious civil violation for which there is no waiver under the immigration law as written. If it is construed as a false claim to U.S. citizenship, it could lead to criminal sanctions. The same would hold true for knowingly using a false social security card, drivers license etc. There could be a statute of limitations defense depending on when these occurred. But, nevertheless, it could lead to prosecution and or deportation proceedings.

Finally, in a blog post for the NYT Magazine's 6th Floor Blog, Chris Suellentrop -- who Vargas contacted about his story after the Post axed it-- recounts the unorthodox circumstances that led to the publication of the piece:

Without having seen the story, I walked into the office of Joel Lovell, one of the magazine’s deputy editors, and closed the door. I told him that Jose Antonio Vargas is an illegal immigrant and that he has a 4,000-word article that tells his story. Should we think about tearing up the book, as we say in the business? [...] Joel thought we should.