Officials have ordered about 11,000 people to leave Minot, N.D., before the rising Souris River 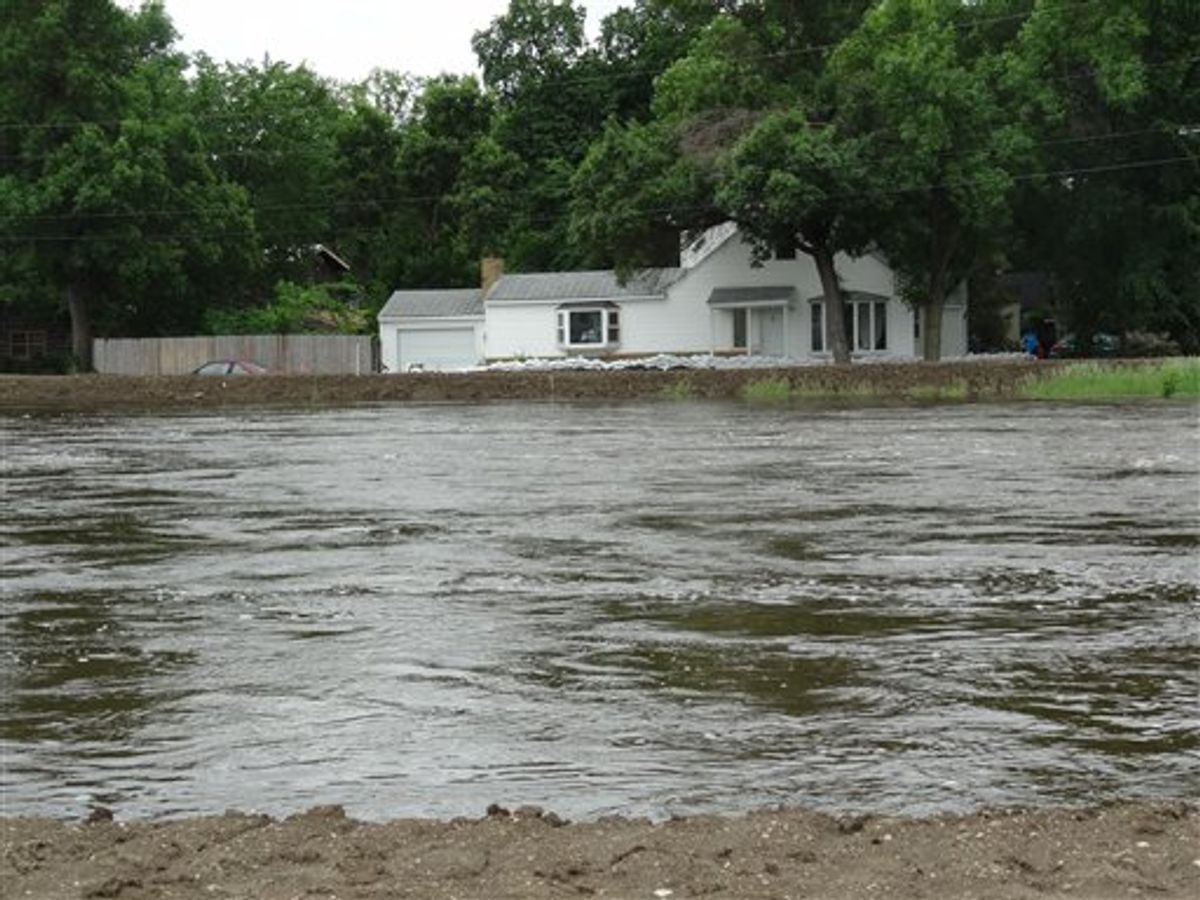 The Souris River passes near a home Tuesday, June 21, 2011, in Minot, N.D. About 11,000 Minot residents are being ordered to leave their homes even earlier than expected this week as the river gets closer to swamping the North Dakota city with the worst flooding in four decades, officials said Tuesday. (AP Photo/ The Forum, Teri Finneman) (AP)
--

Thousands of Minot residents face a Wednesday deadline to evacuate their homes for a second time this spring as the rising Souris River moves closer to swamping the North Dakota city with what's predicted to be its worst flood in four decades.

Officials have ordered about 11,000 people, or a quarter of the city's residents, to evacuate by 6 p.m. But they cautioned even that deadline may be too generous, and said they are prepared to sound warning sirens if water spills over Minot's protective levees any earlier.

"Public safety is paramount," Mayor Curt Zimbelman said Tuesday. "The water is rising fast, and people need to get evacuated as soon as possible."

Water from the Souris River, which loops down from Canada through north central North Dakota and is bloated by heavy spring snowmelt and rain on both sides of the border, is forecast to top the city's levees within two days.

The resulting deluge is expected to dwarf the historic flood of 1969, when the Souris reached 1,554.5 feet above sea level. Zimbelman said the river was already just a tenth of an inch shy of that level at one bridge Tuesday afternoon. It's expected to hit nearly 1,563 feet this weekend -- topping the historical record of 1,558 feet set in 1881 by Friday or Saturday.

About 10,000 Minot residents were evacuated earlier this month before the river hit 1,554.1 feet. They were later allowed to return to their homes, but told to be ready to leave again quickly.

The 1969 flood prompted the Army Corps of Engineers to build a dike system that has been beefed up several times since. But those levees are unable to contain the latest flows coming south from Saskatchawan.

Zimbelman said crews are focusing efforts on building dikes to protect critical infrastructure such as the sewer system, water plants, schools and City Hall. The city also is working on plans to put up secondary dikes outside fringe areas.

Officials at Minot International Airport, which sits on a hill on the north part of town, said the airport will remain fully operational.

"Once we have the critical sites secured, we'll start on these other areas trying to protect as many homes and businesses as possible," he said. "We will continue until the water pushes us out of the area."

Similar protective efforts are being made in the nearby 1,200-resident town of Burlington.

Gov. Jack Dalrymple said Tuesday that residents in Burlington evacuation zones need to be out by noon Wednesday. Ward County residents living along the river must evacuate by 6 p.m., he said.

Guard commander Dave Sprynczynatyk said he expected the impending flood to be one of greatest as far as impact on the community as a whole that he's seen during his 40-year career.

"What I see right now is probably the most devastating in terms of the number of people directly impacted and what will likely be the damage to homes as the water begins to overtop the levees and fill in behind," he said.

Ann Hoggarth, who lives alongside the river, said she felt almost numb Tuesday as she struggled to move some of her belongings to higher ground.

"I've got three stories so I'm hoping the furniture will be OK upstairs," she said, "but I'm a single mom and I had to ship my kids off to their dad, so I don't have anyone to help me."