Obama to set course for drawing down Afghan war

In Wednesday address, the president is expected to announce plans to bring roughly 10,000 American troops home 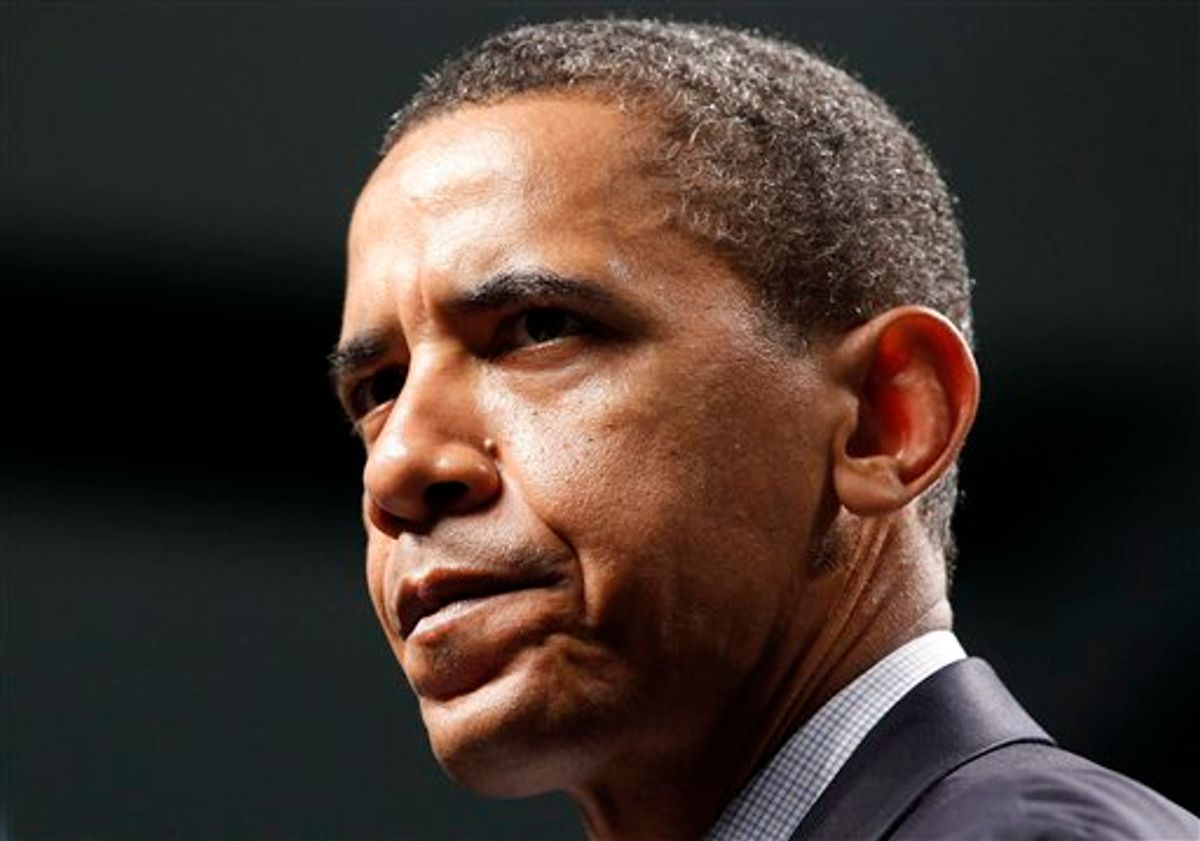 CORRECTS DATE TO JUNE 15, 2010 - FILE - In this June 15, 2011 file photo, President Barack Obama speaks in Pensacola, Fla. Nearing a critical benchmark in the Afghanistan war, President Barack Obama is considering both how many U.S. troops to bring home next month and a broader withdrawal plan to give Afghans control of their security in 2014. But there are deep divisions over how to achieve that, with military leaders favoring a gradual troop reduction and other advisers pushing for a significant decrease in coming months. (AP Photo/Charles Dharapak, File) (AP)
--

President Barack Obama will set the course for drawing down the U.S. war in Afghanistan on Wednesday, when he is expected to announce plans to bring roughly 10,000 American troops home in less than a year.

In a prime-time address from the White House, Obama is likely to outline a phased withdrawal that will bring 5,000 troops home this summer and an additional 5,000 by winter or spring 2012, according to a senior U.S. defense official. That timeline could allow military commanders to keep high troop levels in Afghanistan for two more crucial fighting seasons.

But the cuts expected this year may not be substantial enough to satisfy some lawmakers on Capitol Hill and a war-weary public.

The president reached his decision a week after receiving a range of options from Gen. David Petraeus, the top U.S. and NATO commander in Afghanistan. Obama informed his senior national security advisers, including outgoing Defense Secretary Robert Gates and Secretary of State Hillary Rodham Clinton, of his plans during a White House meeting Tuesday.

"The president is commander in chief," spokesman Jay Carney said. "He is in charge of this process, and he makes the decision."

Obama is also weighing a timeline for bringing home the remaining 20,000 of the 30,000 "surge" troops he ordered to Afghanistan as part of his December 2009 decision to send reinforcements to reverse the Taliban's battlefield momentum. The withdrawals would put the U.S. on a path toward giving Afghans control of their security by 2014 and ultimately shifting the U.S. military from a combat role to a mission focused on training and supporting Afghan forces.

The Obama administration has said its goal in continuing the Afghanistan war, now in its 10th year, is to blunt the Taliban insurgency and dismantle and defeat al-Qaida, the terror network that used the country as a training ground for the Sept. 11, 2001, attacks on the U.S. As of Tuesday, at least 1,522 members of the U.S. military had died in Afghanistan as a result of the U.S. invasion of Afghanistan in late 2001, according to an Associated Press count.

About 100,000 U.S. troops are in the country, three times as many as when Obama took office. Even by drawing down the 30,000 reinforcements, there still will be great uncertainty about how long the remaining 70,000 troops would stay there, although the U.S. and its allies have set Dec. 31, 2014, as a target date for ending the combat mission in Afghanistan.

A reduction this year totaling 10,000 troops would be the rough equivalent of two brigades, which are the main building blocks of an Army division. It's not clear whether Obama's decision would require the Pentagon to pull out two full brigades or, instead, withdraw a collection of smaller combat and support units with an equivalent number of troops.

If Obama were to leave the bulk of the 30,000 surge contingent in Afghanistan through 2012, he would be giving the military another fighting season -- in addition to the one now under way -- to further damage Taliban forces before a larger withdrawal got started. It also would buy more time for the Afghan army and police to grow in numbers and capability.

Under that scenario, the emphasis in U.S.-led military operations is likely to shift away from troop-intensive counterinsurgency operations toward more narrowly focused counterterrorism operations, which focus on capturing and killing insurgents.

Afghan security forces and judicial institutions are expected to take up many aspects of the counterinsurgency fight by establishing the rule of law and respect for government institutions, U.S. officials in Afghanistan said Tuesday.

In recent speeches, Afghan President Hamid Karzai has criticized American forces, suggesting his ally is in danger of becoming an occupying force. He has even threatened action against international forces that conduct airstrikes and has accused allies of undermining and corrupting his government.

Yet there are concerns in his country about the withdrawals. Some of the areas slated to transition to Afghan control have been struck by attacks in recent weeks despite assertions by Karzai that peace talks have started between the U.S., his Afghan government and Taliban emissaries. Publicly, the Taliban say there will be no negotiations until foreign troops leave Afghanistan.

Some U.S. military commanders have favored a more gradual reduction in troops than Obama is expected to announce Wednesday night, arguing that too fast a withdrawal could undermine the fragile security gains.

But other advisers have backed a more significant withdrawal that starts in July and proceeds steadily through the following months. That camp believes the slow yet steady improvements in security, combined with the killing of Osama bin Laden and U.S. success in dismantling much of the al-Qaida network in the country, give the president an opportunity to make larger reductions this year.

Obama previously has said he favors a "significant" withdrawal beginning in July, his self-imposed deadline for starting to bring U.S. troops home. Aides, however, have never quantified that statement.

Pressure for a substantial withdrawal has been mounting from the public and Congress. Even Gates, who has said he favored a "modest" withdrawal, said Tuesday that Obama's decision needed to incorporate domestic concerns about the war.

"It goes without saying that there are a lot of reservations in the Congress about the war in Afghanistan and our level of commitment," Gates said during a news conference at the State Department. "There are concerns among the American people who are tired of a decade of war."

According to an Associated Press-GfK poll last month, 80 percent of Americans say they approve of Obama's decision to begin withdrawal of combat troops in July and end U.S. combat operations in Afghanistan by 2014. Just 15 percent disapprove.

On Capitol Hill, even the more moderate or conservative members of his party, such as Sen. Bob Casey of Pennsylvania and Sen. Joe Manchin of West Virginia, are pressing for significant cuts and a shift in mission.

"The question the president faces -- we all face -- is quite simple: Will we choose to rebuild America or Afghanistan? In light of our nation's fiscal peril, we cannot do both," Manchin said Tuesday.

Sen. Carl Levin, D-Mich., chairman of the Senate Armed Services Committee, said improved conditions in Afghanistan would permit Obama to withdraw at least 15,000 troops by the end of the year.

Obama aides have sidestepped questions about what role the cost of the war in Afghanistan played in Obama's decision, saying only that the president was focused on meeting the goal of transferring security by 2014.

Following the announcement on the drawdown, Obama will visit troops Thursday at Fort Drum, the upstate New York Army post that is home to the 10th Mountain Division, one of the most frequently deployed divisions to Afghanistan.