Drop the Gore vs. Obama script

The former VP indicts the media, corporate titans and both parties, not just Obama, for inaction on climate change 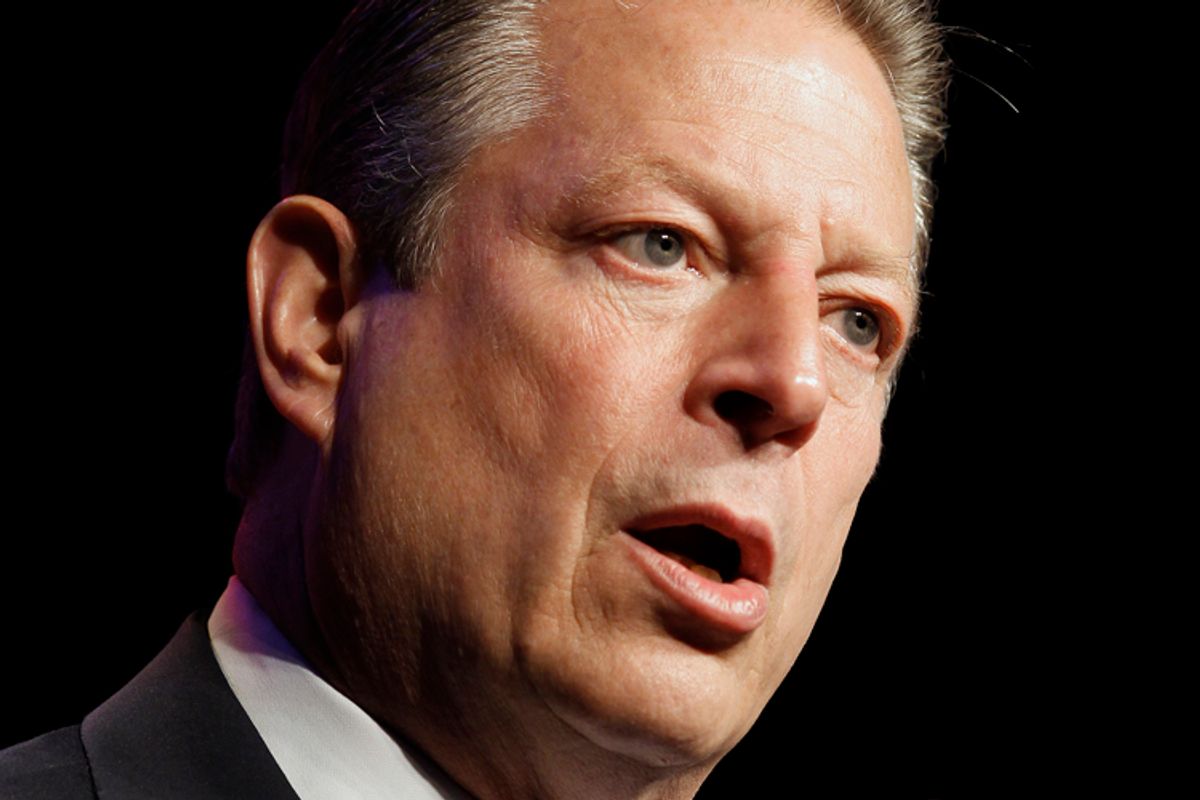 The sweep and complexity of Al Gore's 7,000-word climate-change jeremiad in Rolling Stone, making news because he chides President Obama, in itself partly exonerates the president. As Gore indicts the media, corporate leaders, both political parties and by extension voters for their inaction on the deadly challenge, it seems almost churlish to single out one man for blame, even if he is the president: Look at what he's up against!

The fact is, Gore didn't single out the president in "Climate of Denial"; most of his piece indicts the media for indulging in "debate" about whether climate change is real and human-made, when the science is unanimous that it is, as well as turning news into entertainment, to the detriment of serious reporting on global threats, in search of bigger audiences. He also calls out Fox News as a 24/7 purveyor of disinformation and Republican propaganda, on the heels of Jon Stewart's great takedown last night. But Gore's critique is just, like, too complicated, and kind of a downer, and maybe hits too close to home. So a lot of outlets are just saying: "Hey! Look over there! It's not us -- It's Obama! Fight!"

What Gore is ultimately saying about Obama, that he "has thus far failed to use the bully pulpit to make the case for bold action on climate change," has been said by plenty of other advocates on plenty of other issues, particularly about domestic economic issues. It points to an inconvenient truth about politics right now: President Obama came to power with a mandate for "change," but no one agreed about exactly what that meant, and in these first two-plus years, on divisive issues, he's tried to split the difference. He and his team assumed that the biggest problem in Washington was dysfunctional partisan gridlock, and if you committed to compromise on the big problems, you could "do big things."

But with a Republican Party whose strategy consisted of saying no to everything, no matter how reasonable, that approach didn't work. The Obama team also thought they could make progress by cutting side deals with the powerful interests that block change, promising big healthcare interests, for instance, that the public option was off the table. Healthcare reform ultimately passed, but without a public option or other methods to contain costs, and the side deals contributed to public cynicism about the process and the product. Likewise on the failure to pass a climate change bill, Gore says, "Senate advocates -- including one Republican -- felt abandoned when the president made concessions to oil and coal companies without asking for anything in return."

Rolling Stone's Tim Dickinson's story, linked from the Gore piece, fleshes out that disappointment. After a strong climate bill passed the House, the Senate took up the issue, and a "tripartite" team of John Kerry, Joe Lieberman and Lindsey Graham made progress. But advocates said "the administration applied the same backroom approach it took to health care reform. Instead of waging a public debate to pit the American people against the corporate polluters, Obama gave the polluters a seat at the negotiating table. In private, big energy firms were offered sweetheart deals to acquiesce to the climate bill, including expanded offshore drilling for oil giants like BP and taxpayer subsidies for coal and nuclear interests that outstripped those for clean energy." The deal fell apart anyway, and just after Obama unilaterally announced that his administration would extend offshore drilling, without any climate change concessions on the part of industry, came news of the BP oil spill, which ensured that coddling oil companies would be remembered as a bipartisan folly.

The question for Obama, and for Democrats more broadly, now that compromise and co-optation hasn't worked is: What next? On one level I react to complaints about the president failing to use his "bully pulpit" with a little weariness: More speeches? Really? We need action. And I sympathize with the president about the lack of backing in Congress for bold change. But at the heart of the many calls for Obama to take the lead in defining the dire problems we face -- on climate change, on income inequality, on the troubled economy more broadly -- is a deep and widely shared frustration: The president hasn't seized a moment of profound crisis and opportunity to tell Americans exactly why the status quo isn't working anymore, except for a tiny sliver of America, and what we're going to do about it.

Right before I read Gore's piece I finished an article by Mike Tomasky that made almost the same exact case on the issue of economic inequality. Peter Whoriskey's terrific Washington Post report, "Breakaway Wealth," got everyone's attention: It's unconscionable that the share of wealth that goes to the richest .01 percent of Americans has shot from 2.5 percent in the mid-1970s to more than 10 percent today. That inequality threatens the foundations of our country. It's part of why we have an economic crisis in the first place: Unemployment is sky high, wages are stagnant (or falling, for those at the bottom), people are using services that drain tax revenue instead of doing work that produces it. The concentration of economic power leads that elite to have more political power, which they use to protect their economic power. This threatens democracy, even if they don't talk about it at Tea Party events.

Tomasky concludes: "God forbid also that a Democrat -- the president, let’s say -- make this argument and draw these connections for the American people ... Mr. President, Democrats: it would seem that now is the time." Paul Krugman has likewise noted, going back to the debate over the inadequate size of the 2009 stimulus: OK, maybe the president is right, and he couldn't have gotten more money from conservative Democrats and Republicans. Still: If he'd made a stronger case about the broken economy, raging economic inequality, and the imperative to spend government money now to get things moving again, the worst that could have happened is that he'd lose, but Americans would know what Democrats believe we're up against -- and what we believed would work, even if Republicans blocked it. And who knows, a rousing call to bold action might have galvanized Americans to demand more from Washington. We'll never know.

The frustrating thing about the lack of a bold approach to climate change is that action on this massive threat has the potential to ease several problems at once, not just environmental ones: Massive public and private investment in alternative energy and conservation technologies could spur a renaissance in research, development and manufacturing, and provide jobs at every level, from top scientists to underskilled workers weather-proofing public buildings. And of course, reducing our dependence on gulf oil would enhance national security by making intervention in that region less tempting, giving us more freedom to pursue both human rights and genuine American interests in oil-producing states.

But it would also require that Democrats take on the people who profit from the status quo, and as Gore lays out, that's not easy. I wish Gore had talked a little about his own role with the Democratic Leadership Council in the 1980s and '90s, pushing his party to be more friendly to business, which is part of what's led to the sad reality that both parties compete to serve corporate America. I don't say that to be insulting; I'm sure Gore has some important insights about what was right, and wrong, about that endeavor. We live with its legacy today. He makes one point I'll quibble with: that the slow but certain demise of "don't ask, don't tell" should inspire climate-change activists, because it shows the power of hard work and activist organizing to do what's right. With no disrespect to the legions of DADT advocates whose work I admire: Strong advocacy wasn't the whole story. DADT fell for two primary reasons: Americans are coming to accept gay rights more broadly, and it was a win-win solution. The military gets more soldiers, and gay people get more rights. Maybe most important: It didn't cost corporate America a dime. It didn't require higher taxes. It was a tough sell but far easier than what Gore is proposing. We're winning the social issues, and losing on the economic ones.

I recently ran across a comment Franklin Delano Roosevelt made on the eve of becoming president in 1933, when the Depression shocked the country into reappraising virtually everything about itself ."All our great Presidents were leaders of thought at times when certain historic ideas in the life of the nation had to be clarified ... [I]t needs to be reaffirmed at this juncture that the United States is one organic entity, that no interest, no class, no section, is either separate or supreme above the interests of all.” Obama took office in just that sort of time, and sympathetic critics, like Gore, wish he'd seized the sort of moment FDR described. For better or worse, though, it's not too late: The climate change crisis gets worse every day, and the economic crisis isn't going away any time soon either.

I discussed the Gore piece with Rolling Stone's Eric Bates on Hardball today: