Why we still love "Ferris Bueller" 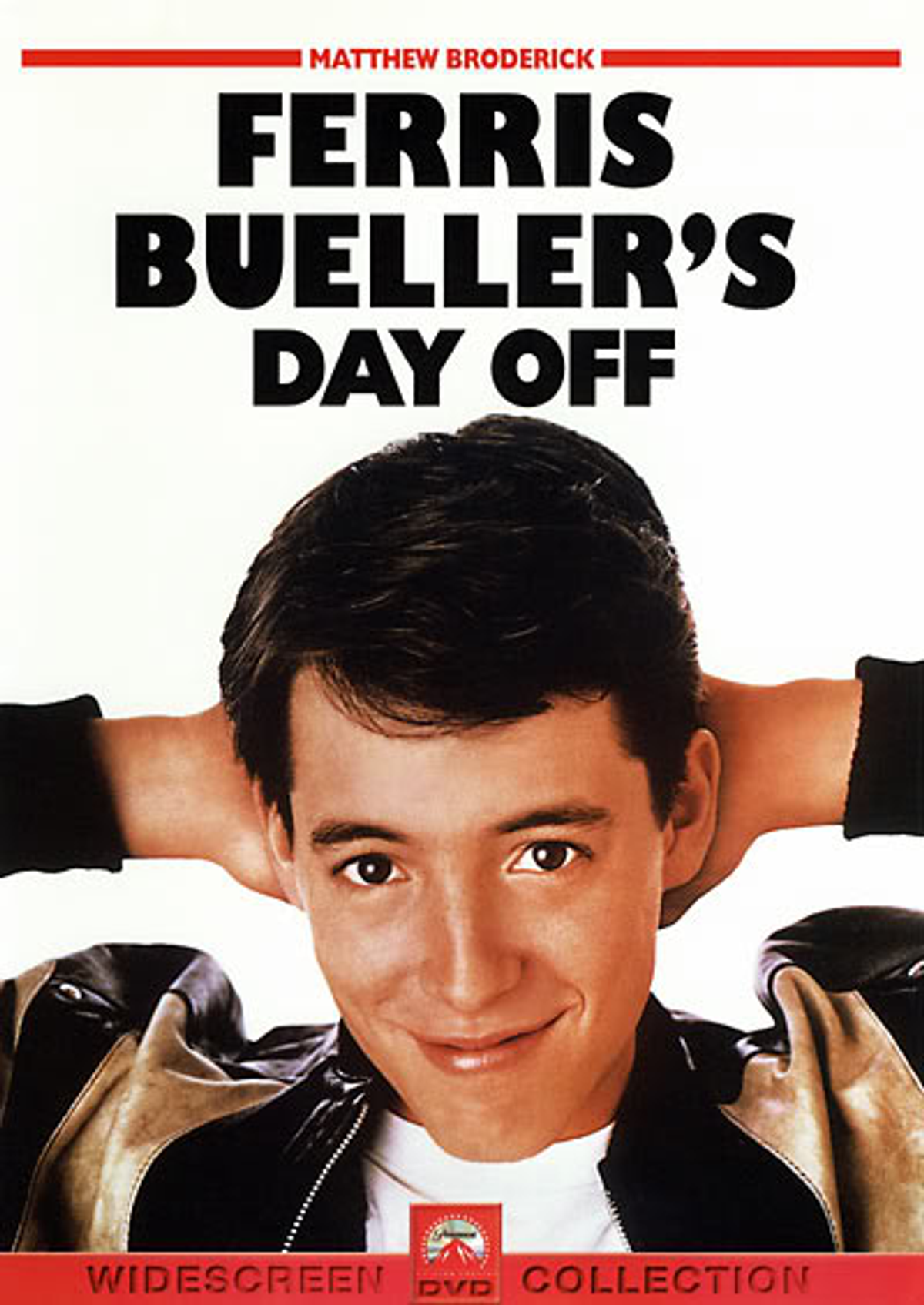 With its straightforward narrative about three teenagers skipping school, "Ferris Bueller's Day Off" doesn't seem made for high-minded film fetishists like labyrinthine works such as "Citizen Kane," "Apocalypse Now" or any selection from David Lynch's catalog. Yet, as the John Hughes classic celebrates its 25-year anniversary this month, its enduring genius has indeed become a subject of esoteric speculation and multilayered theorizing.

Chief among the hypotheses aiming to explain "Ferris'" immortality is the eerily compelling Ferris Bueller "Fight Club" Theory. It suggests the film is a teenage version of the Chuck Palahniuk story whereby Ferris is Cameron's hallucination à la Tyler Durden and Sloane is Marla Singer. This is an extrapolation of an earlier theory positing that while Ferris may not be a figment, he is actually the story-arc-less supporting character in a movie more accurately described as "Cameron Frye's Day Off."

These theories, of course, are seeking some sort of unseen secret in the film -- and quite understandably so. As great as the movie is, its inexorable traction, persistent ubiquity and general zeitgeistiness over a quarter century is unprecedented for a fairly standard (if expertly executed) teenage rebellion flick. Such success implies more than just sharp jokes and epic characters at work. It seems to hint at an overpoweringly brilliant sleight of hand that somehow creates magical movie-audience catnip -- the kind that, for instance, makes you drop everything the minute your favorite channel in the cable rerun-o-sphere shows the Abe Froman/Sausage King of Chicago argument.

However, having meticulously climbed my way up to Official John Hughes Aficionado status -- a process requiring decades of back-breaking work watching reruns in my boxer shorts on my couch -- I believe that "Ferris Bueller's Day Off" endures for a far more simple and overt reason than many popular theories posit. I'm convinced it remains in the cultural firmament because it uniquely perfected one of the most addictive -- and deceptive -- Hollywood tropes of all time: the Fairy Tale Bromance.

"Ferris" is a masterpiece of '80s virtuosity for many obvious reasons, and in particular, its caricatures. But for all of its pitch-perfect performances (Jeffrey Jones' archetype-creating Mr. Rooney, Jennifer Grey's angsty older sister brilliance, Charlie Sheen's show-stealing cameo, to name a few) the film's singular fulcrum is the friendship between Cameron and Ferris -- that is, the friendship between the average physically awkward, socially inept nerd/geek who personifies the vast majority of teenagers, and the single most popular/charismatic kid in the aggregate history of the American high school.

As anyone who experienced the brutal realities of adolescence will almost certainly attest, such a relationship is utterly preposterous -- laughable on its face, really. High school is a mirror of society -- and despite the saccharine odes to social mobility and equality that mark every presidential election season, American society is deeply and passionately stratified by status. Look no further than the scourge of bullying to know that the same divide dominates the teenage years. That means in the real world, Average Cameron would probably be ignored or ridiculed by Celebrity Rock Star Ferris, and they almost certainly would never be best friends.

And yet, that's what makes their Fairy Tale Bromance so alluring -- especially to a moviegoing audience of Camerons who always wanted the friendship of the Ferrises. Indeed, in the Frye-Bueller relationship, the two not only transcend the impenetrable status barriers, but at times (the wake-up call to bedraggled Cameron, the kitchen scene after the Rooney prank call, etc.) the latter actually seems to need and crave the former's friendship more than the other way around. Unrealistic? Obviously. The populist utopian ideal? Absolutely -- at least for us Camerons.

Mind you, "Ferris Bueller's Day Off" wasn't the first Fairy Tale Bromance to capture the hearts and minds of America's rank-and-file totally uncool youth. In the contemporary sense, that distinction probably goes to "Happy Days" and "Empire Strikes Back" -- the former of which had the Cameron-ish Richie Cunningham buddying up with the super-hip Fonz, the latter of which built the whiny-younger-brother-swashbuckling-older-brother relationship of Luke Skywalker and Han Solo in "Star Wars" into a primordial version of a Cameron-Ferris friendship. Additionally, "Lucas," which was released a few months before "Ferris Bueller's Day Off," certainly found success in the lovable-but-absurd BFF-ship between a 14-year-old ultra-nerd and the star high school quarterback.

However, where "Happy Days'" Richie-Fonz bromance was a bit avuncular, where mutual Leia lust made the Luke-Han bromance uneasy, and where "Lucas" simply asked for too much suspension of disbelief, "Ferris'" Frye-Bueller relationship was perfectly calibrated between ridiculous and vaguely believable, thereby creating a whole archetype -- one that subsequently became its own sub-category within the larger Bromance genre.

This sub-category has since become a smash success, producing classics such as "Dazed and Confused," "Old School" and "40 Year Old Virgin" (to name a few). Unlike the traditional Bromances that follow friends of similar status ("Stand By Me," "The Goonies," "Superbad"), these Fairy Tale Bromances, like their "Ferris" forefather, all revolve around inspiring friendships that bridge impossible social status gaps. I mean, let's just be honest: In the real world, there's no way the Jason London's high school QB, Rory Cochrane's super-stoner, Matthew McConaughey's '70s Fonz and Adam Goldberg's teenage Woody Allen would ever find such rollicking Texas camaraderie; just like there's no way guys as cool and handsome as Vince Vaughn and Luke Wilson would fraternize with an updated version of the Tri-Lams; just like there's no way electronic-store sex fiends would so comfortably embrace the middle-aged celibate. But like "Ferris" before them, those classics hit the Fairy Tale Bromance's inspirational sweet spot -- just outside the realm of realistic, but close enough to seem worthy of legitimate aspiration.

In that sense, "Ferris Bueller's Day Off" is the modern era's original Horatio Alger story, applying the addictive rags-to-riches American Dream idea to the Gilded Age-like social structure of modern high school. The result is a meme that we the audience quickly came to insist upon, as evidenced most crisply by the box-office failure of John Hughes' immediate "Ferris" follow-up, "Some Kind of Wonderful." In depicting the brutalities of what a Hardy Jenns-Keith Nelson relationship would actually look like in a real high school, that more realistic (though still a bit Cinderella-ish) picture simply didn't provide the requisite Fairy Tale Bromance mythology -- and it was punished as such.

Twenty-five years after the release of "Ferris Bueller's Day Off," as society has become even more stratified by status (economic, social or otherwise), the film's true conquest can be best seen outside the movie theater and in the abstract glorification of geeks, nerds and other such Camerons in the larger culture. (I stress "abstract" because we seem to love the idea of these outcasts, but not necessarily the individual outcasts themselves.)

As just one example of that hegemony, ABC News reported last year on a poll finding that "57 percent of Americans say being called a geek is a compliment and more Americans would prefer to be called a geek rather than a jock." Replace "geek" with Cameron and "jock" with Ferris, and you are looking at the subliminal longing of "Ferris Bueller's Day Off" (though Ferris wasn't technically a jock, he certainly occupied the same social status, which was another alluring part of the fairy tale -- the non-jock being as cool as the jocks). And, as if directly saluting the legacy of "Ferris," the poll found a generation gap, whereby 66 of those 18-34-year-olds (aka the generation that grew up on John Hughes) identified "geek" as a compliment, "only 39 percent of those 65 and older agree."

Clearly, then, when Cameron said, "Ferris Bueller, you're my hero," he wasn't just giving his own opinion -- he was speaking for a generation. Thanks in part to the Fairy Tale Bromance, that generation's still-far-fetched dreams of status equality between the social haves and have nots -- between the Camerons and Ferrises -- live on.