The fugitive had spent 16 years on the run, and was found living in an apartment building in Santa Monica 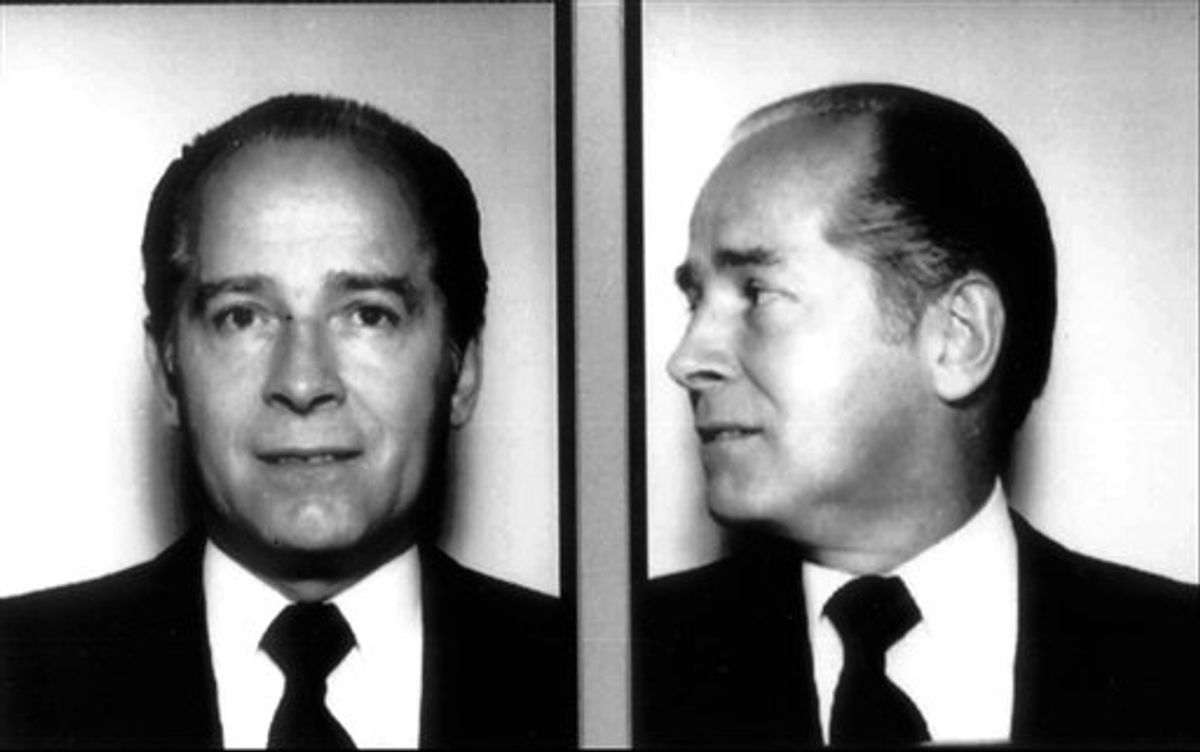 FILE - In these 1984 file photos originally released by the FBI, New England organized crime figure James "Whitey" Bulger is shown. Bulger, a notorious Boston gangster on the FBI's "Ten Most Wanted" list for his alleged role in 19 murders, has been captured near Los Angeles after living on the run for 16 years, authorities said Wednesday June 22, 2011. (AP Photo/Federal Bureau of Investigation, File) (AP)
--

Boston mob boss James "Whitey" Bulger was captured near Los Angeles after spending the last 16 years on the run during an epic manhunt that served as a major embarrassment to the FBI and made the fugitive a global sensation as he constantly found a way to elude authorities.

The FBI finally caught the 81-year-old Bulger Wednesday at a residence in Santa Monica along with his longtime girlfriend Catherine Greig just days after the government launched a new publicity campaign to locate the fugitive mobster, said Steven Martinez, FBI's assistant director in charge in Los Angeles. The arrest was based on a tip from the campaign, he said.

The FBI had been conducting a surveillance operation in the area where the arrest was made, said police Sgt. Rudy Flores, who gave no details of the arrest.

FBI agents still swarmed around Bulger's building late Wednesday, hours after the arrests in a neighborhood of two and three-story apartment buildings.

Bulger lived on the third floor of The Princess Eugenia, a three-story, 28-unit building of one and two-bedroom apartments three blocks from a bluff that overlooks the Pacific Ocean. Neighbors said the couple hadn't stood out as unusual.

Barbara Gluck lives on the same floor as Bulger and Greig. She said she didn't know their names but recognized them after she heard news of their arrest from photos on the Internet.

Gluck described Greig as "sweet and lovely" and said they would have "girl talk" when they ran into each other in the building. Bulger became angry whenever he saw the two of them talking, and would say, "Stop talking to her," Gluck said.

"At one point, she (Greig) said he (Bulger) has a rage issue," Gluck said.

Bulger and Grieg were scheduled to make an appearance in Los Angeles federal court Thursday. He faces a series of federal charges including murder, conspiracy to commit murder, narcotics distribution, extortion and money laundering, while the 60-year-old Greig is charged with harboring a fugitive. He was on the FBI's "Ten Most Wanted" list for his alleged role in 19 murders.

The arrest brings an end to a manhunt that received worldwide attention as the FBI received reported sightings of Bulger and Greig from all over the United States and parts of Europe. In many of those sightings, investigators could not confirm whether it was actually Bulger who was spotted or simply a lookalike. He has been the subject of several books and was an inspiration for the 2006 Martin Scorsese film "The Departed."

The investigation also touched the highest level of Massachusetts politics. Bulger's younger brother, William, was one of the most powerful politicians in the state, leading the Massachusetts Senate for 17 years and later serving as president of the University of Massachusetts for seven years. William Bulger told a congressional committee that he spoke to his brother shortly after he went on the run in 1995 but had no idea about his whereabouts.

Bulger, nicknamed "Whitey" for his shock of bright platinum hair, grew up in a gritty South Boston housing project, and went on to become Boston's most notorious gangster.

Along with Stephen "The Rifleman" Flemmi, he led the violent Winter Hill Gang, a largely Irish mob that ran loan-sharking, gambling and drug rackets in the Boston area. U.S. Attorney Donald K. Stern said in 2000 that the two were "responsible for a reign of intimidation and murder that spanned 25 years."

The government has connected Bulger to a series of ruthless killings. One victim was shot between the eyes in a parking lot at his country club in Oklahoma. Another was gunned down in broad daylight on a South Boston street to prevent him from talking about the killing in Oklahoma. Others were taken out for running afoul of Bulger's gambling enterprises.

He fled in January 1995 after being tipped by a former Boston FBI agent that he was about to be indicted. Bulger himself was a top-echelon FBI informant.

Prosecutors said he went on the run after being warned by John Connolly Jr., an FBI agent who had made Bulger an FBI informant 20 years earlier. Connolly was convicted of racketeering in May 2002 for protecting Bulger and Flemmi, also an FBI informant.

Bulger provided the Boston FBI with information on his gang's main rival, the New England Mob, in an era when bringing down the Mafia was one of the FBI's top national priorities.

But the Boston FBI office was sharply criticized when the extent of Bulger's alleged crimes and his cozy relationship with the FBI became public in the late 1990s.

After he fled, Bulger became one of the nation's most-hunted fugitives. With a place next to Osama bin Laden on the "Ten Most Wanted" list, he had a $2 million reward on his head.

In September 2002, the FBI received the most reliable tip in three years when a British businessman who had met Bulger eight years earlier said he spotted Bulger on a London street.

After the sighting, the FBI's multiagency violent fugitive task force in Boston and inspectors from New Scotland Yard scoured London hotels, Internet cafes and gyms in search of Bulger. The FBI also released an updated sketch, using the businessman's description of Bulger as tan, white-haired and sporting a gray goatee.

On Monday, the FBI announced a new publicity campaign and accompanying public service ad that asked people, particularly women, to be on the lookout for Greig. The 30-second ad started running Tuesday in 14 television markets to which Bulger may have ties and was to air during programs popular with women roughly Greig's age.

The new campaign pointed out that Greig had several plastic surgeries before going on the lam and was known to frequent beauty salons.

John Weiskopf, who lives across the street from Bulger's Santa Monica building, said he recognized Bulger when he saw his photo on the Internet.

"I recognized him. I said 'Holy Smokes,'" he said.

"From what I understand, these were really gracious easy-going people," Weiskopf said. "They don't come out with fangs, they just blended in."

For many years, William Bulger was able to avoid any tarnish from his brother's alleged crimes. But in August 2003, he resigned his post as president of UMass amid pressure from then-Gov. Mitt Romney and Attorney General Thomas Reilly.

His resignation came two months after he testified about his brother before a congressional committee. The committee, in a draft report issued in 2003, blasted the FBI for its use of Bulger and other criminals as informants, calling it "one of the greatest failures in the history of federal law enforcement."