But it's not exactly a sign of the religious vs. secular "war" that some say is brewing 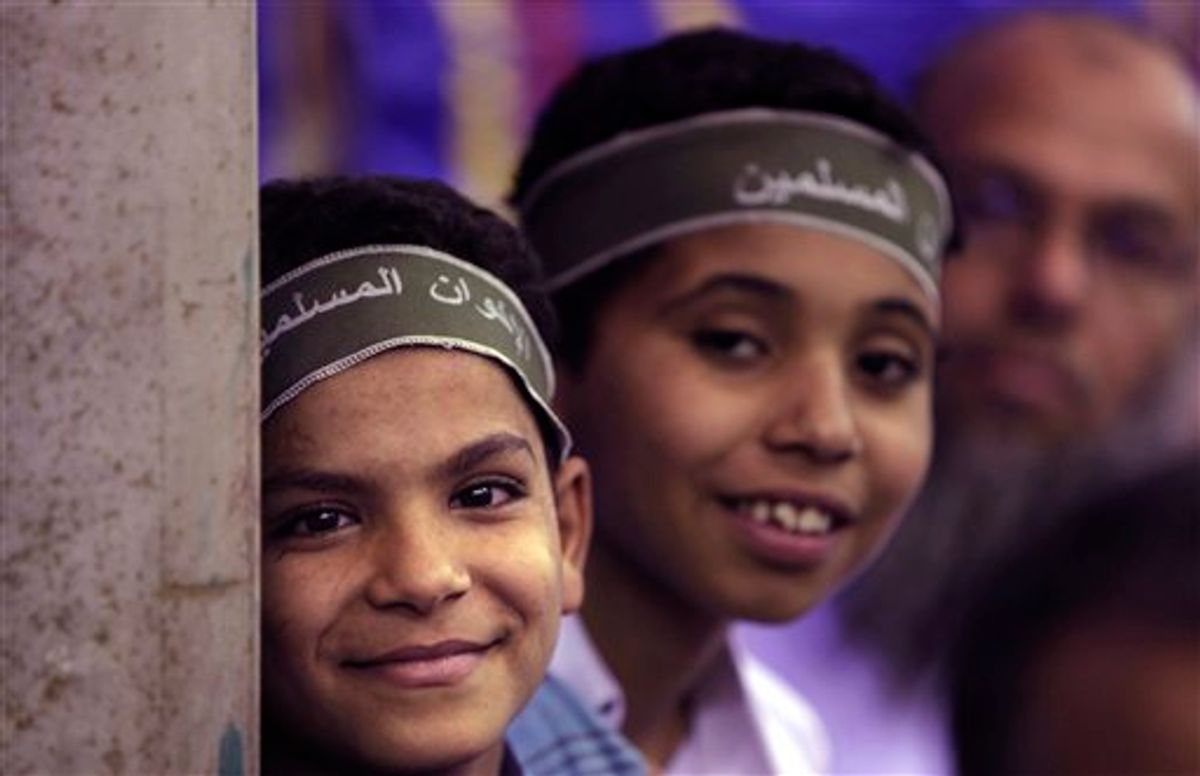 In this Wednesday, May 18, 2011 picture, two Egyptian boys wear headbands reading "Muslim Brotherhood" as they and other supporters attend a Muslim Brotherhood electoral rally in the Munib neighborhood of Cairo, Egypt. Once forced underground, the Brotherhood is likely to be part of Egypt's new government, fueling fears of Islamic rule. But the Brotherhood's own identity is on the line, and there is pressure from inside and out for it not to go down a sharp-right Islamic road. (AP Photo/Nasser Nasser) (AP)
--

Tensions between Egypt's opposing political factions are flaring up. A report by the Guardian suggests that a "war" is developing between the nation's Islamist and secular political forces, as the leftist, secular faction "threatened to bring mass pro-democracy protests back to Cairo, with a "million-strong" occupation of Tahrir Square planned for 8 July unless the ruling army generals abandon their current "roadmap" to democracy."

As the Guardian notes:

Campaigners fear the existing post-Mubarak transition program – which would see September's ballot held under an amended version of Egypt's existing constitution and then allow members of parliament to oversee the writing of a new constitution – may cede permanent power to the Muslim Brotherhood and other religious groups, who are expected to dominate the poll.

Egypt's interim prime minister, Essam Sharaf -- in line with the desires of secular groups -- suggested elections could be delayed to allow the nation's "political landscape," but has since emphasized that the election timetable will not be changed (hence the proposed July 8th protests). Fierce disagreements about the when the constitution will be written and what it will include continue too.

However, the leftist community calling for actions next month seems more concerned with keeping the revolution strong, rather than focusing on the tensions between Egypt's religious and secular groups.

On a Facebook page titled "The 2nd revolution of anger" followed by 55,000 members, the AFP reports, activists urge that the aims of the original uprising -- the foundation of a new Egypt -- be emphasized:

To all rival political forces debating which should come first, constitution or elections, save your revolution first, save Egypt first. Our revolution is collapsing.

This is not to say that concerns about the elections and the new constitution do not also fall along Islamist vs. secular lines -- this seems irrefutable -- but rather that activists in Egypt remain above all committed to the protest movement staying strong and relevant in order to stave off future oppressive regimes taking control of a currently febrile nation.