More than 1,500 refugees flee Syria in one day

Syrian troops backed by tanks pushed to the Turkish border on Thursday, encouraging the exodus 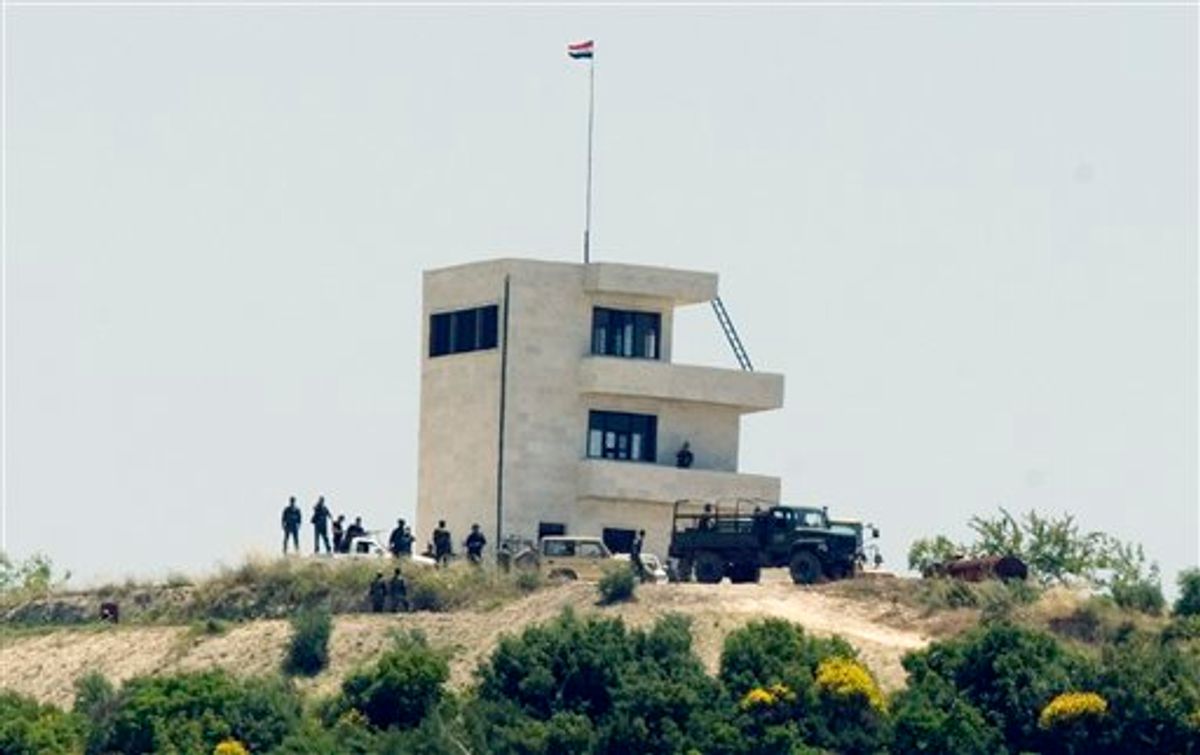 Syrian troops arrive at a hill overlooking Turkey-Syria border, about three kilometers inside Syria, as Syrians waiting to enter Turkey rushed to the crossing point near the Turkish village of Guvecci in Hatay province, Turkey, Thursday, June 23, 2011. Syrian activists claimed that troops backed by tanks and snipers have entered a village along the Turkish border as the regime expands its crackdown on a pro-democracy movement that has posed the gravest challenge to President Bashar Assad's rule(AP Photo/Burhan Ozbilici) (AP)
--

More than 1,500 Syrian refugees streamed across the border to safe havens in Turkey in one day as Syria's 3-month-old pro-democracy movement braced for another day of mass protests Friday.

The refugees crossed into Turkey on Thursday as Syrian troops backed by tanks pushed to the border in their sweep against the anti-government protests, which have posed the gravest challenge to President Bashar Assad's rule. More than 11,700 Syrians are now housed or seeking shelter in Turkish refugee camps, the Turkish Foreign Ministry said Friday.

The Syrian opposition says 1,400 people have been killed in a relentless government crackdown on dissent. More demonstrations were planned for Friday after noon prayers.

International condemnation on Damascus was mounting steadily. The European Union announced Thursday it was slapping new sanctions on the Syrian regime and U.S. Secretary of State Hillary Rodham Clinton warned Damascus to pull its troops back from the Turkish border.

Syrian soldiers patrolled in military vehicles and on foot around the border village of Khirbet al-Jouz, according to Associated Press journalists who watched their movements from the Turkish side. The Local Coordinating Committees, which track the Syrian protest movement, said residents reported tanks had entered the village and snipers were spotted on rooftops Thursday.

Syria has banned all but a few foreign journalists and restricted local media, making it nearly impossible to independently confirm the accounts.

On Thursday, a stream of refugees poured across the border -- some of them glancing behind them as they crossed into Turkey, as though fearful of being chased. The refugees came in a convoy of about 20 minibuses and some rushed on foot across the border, to be met by Turkish soldiers and escorted to nearby camps.

The Syrian army's operation was the closest Syrian troops had come to Turkey since the military crackdown in the area began two weeks ago as Assad's forces tried to snuff out the opposition's chances of gaining a territorial foothold for a wider rebellion. The army's main thrust came against the town of Jisr al-Shughour, where armed anti-government resistance flared in early June.

In Brussels, the EU said it had expanded its anti-Syrian sanctions list, targeting seven more individuals and four companies, bringing to 34 the number of people and entities faced with an asset freeze and travel ban, including Assad.

The EU also has an embargo on sales of arms and equipment that can be used to suppress demonstrations.

The Syrian regime blames foreign conspirators and thugs for the unrest, but the protesters deny any foreign influence in their movement, during which they say authorities have detained 10,000 people.

On Wednesday, Syria's foreign minister, Walid Moallem, lashed out at European governments for threatening the new round of sanctions and accused the West of trying to sow chaos and conflict in the Arab nation.

In the government's latest bid to blunt the demonstrations, Moallem also reiterated Assad's call for national dialogue and spoke of democracy within months -- a bold assertion after more than four decades of authoritarian rule by the Assad family and months of bloody reprisals.

A skeptical opposition rejected the overture while the Syrian military is occupying towns and shooting protesters.