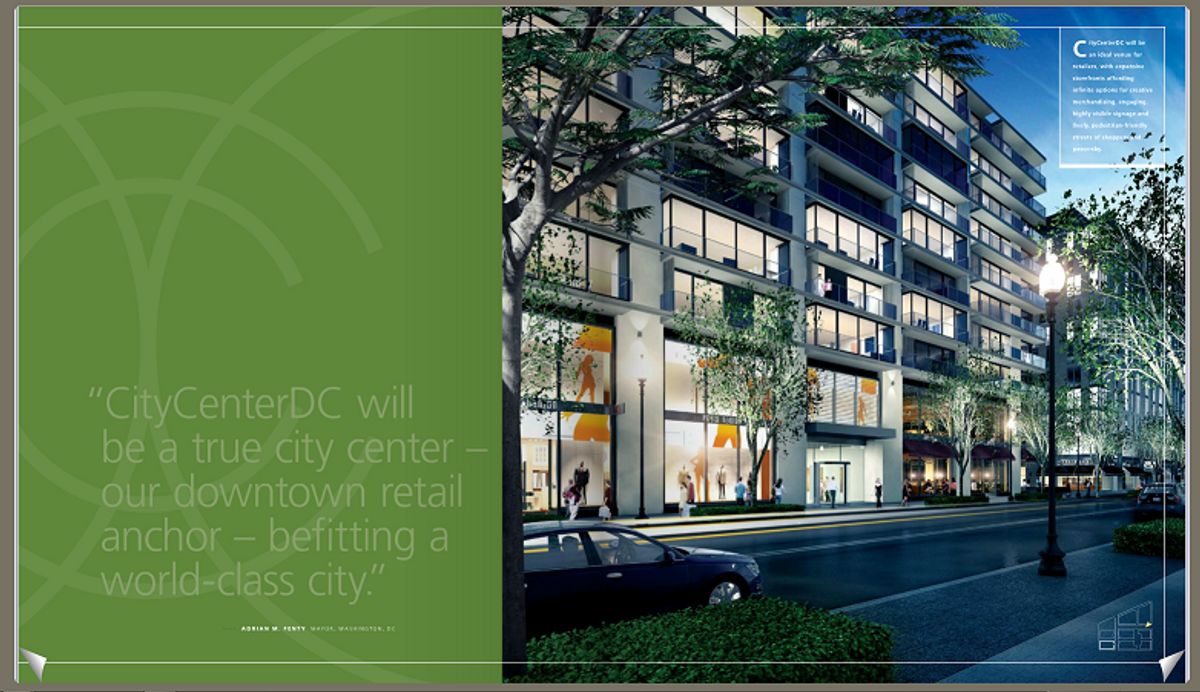 Do I spot crescents in this CityCenterDC promotional brochure?
--

There is a giant real estate development happening in downtown Washington, D.C., near the White House, on the site of the old convention center. Boring news for non-D.C. residents. But I'm willing to bet that the CityCenterDC complex -- office space, retail, condos, your standard massive downtown "revitalization" project -- will soon be very interesting to a lot of people who don't live in the area. Not because anyone cares about urban land-use issues, but because of one of the project's investors: Muslims.

The Washington City Paper noticed a bombshell buried at the bottom of a New York Times piece:

Even before the Qatari investors became involved, Hines and Archstone determined that leasing to banks would not help them create lively shopping streets, Mr. Alsup said. But as it happened, their hesitancy on bank branches meshed with the policies of their financial partners, who adhere to the restrictions of Shariah, or Islamic law, including the ban on collecting interest. Restaurants will be able to serve liquor, but retailers whose primary business involves selling alcohol will not be allowed, Mr. Alsup said.

That's right: Shariah law, a stone's throw from the U.S. Capitol. I am assuming the Times just neglected to mention that in addition to banning bars from the complex, all women will be required to wear the niqab, and obviously all infidels will be murdered, while shopping at the Apple store or whatever ends up there. And no dancing!

What's astounding is that as far as I can see, Matt Drudge hasn't picked this up. Pamela Geller hasn't written a lengthy screed about it. Robert Spencer has not weighed in. No one at the Corner has mocked liberals for mocking the threat of creeping Shariah. Get on it, guys! SHARIAH LAW HAS BEEN IMPOSED IN WASHINGTON!