Boehner: "We have to defend our responsibility under the Constitution" 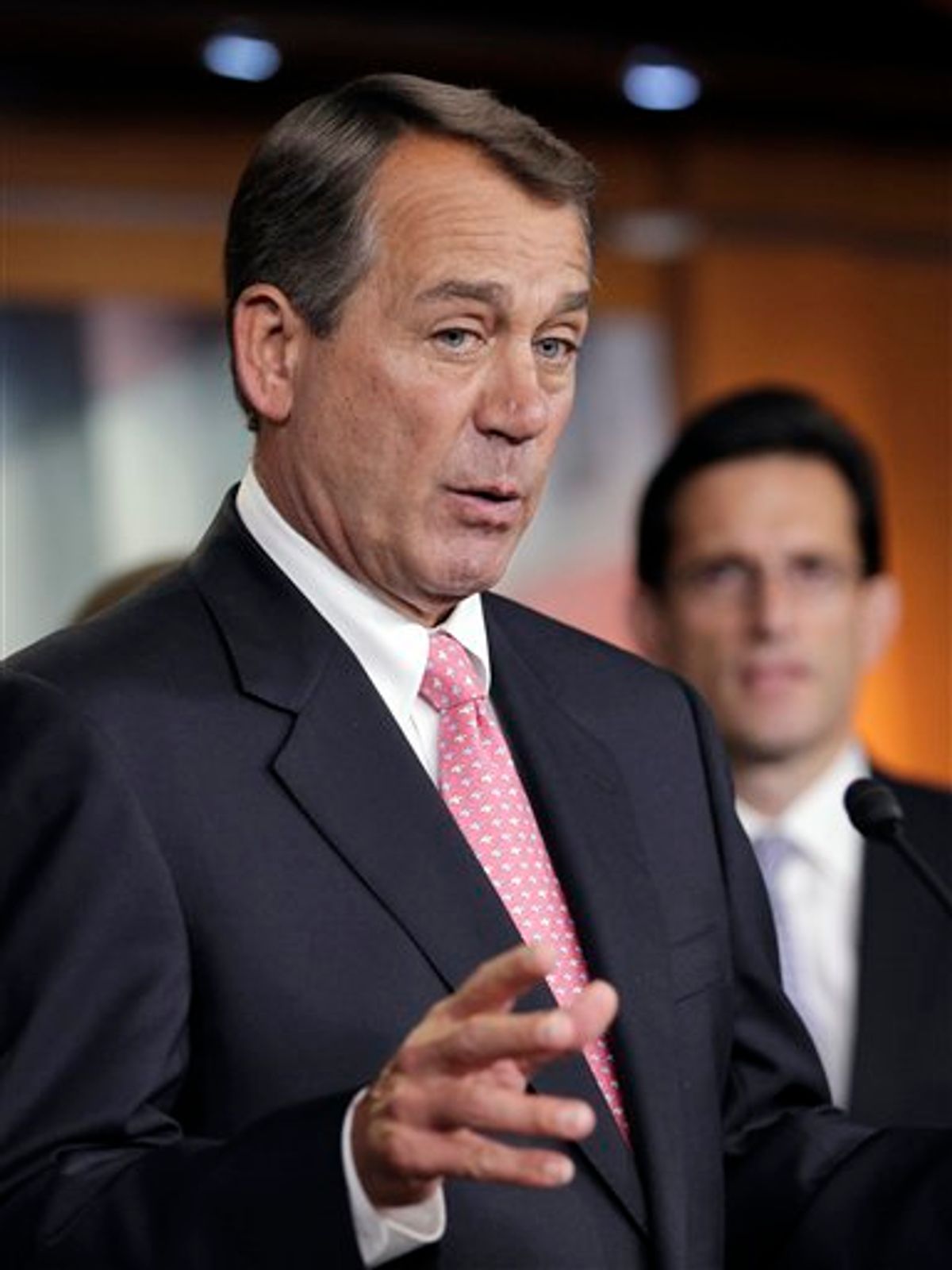 Clearly frustrated with President Barack Obama, Republican leaders are propelling the House toward crucial votes on the U.S. military role in Libya that could embarrass the commander in chief and reverberate in Tripoli and NATO capitals.

"I just believe that because of the president's failure to consult with the Congress, failure to outline for the American people why we were doing this before we engaged in this puts us in the position where we have to defend our responsibility under the Constitution," House Speaker John Boehner, R-Ohio, said in advancing two measures.

The House was scheduled to vote Friday on the competing measures: a resolution giving Obama limited authority to continue the American involvement in the NATO-led operation against Moammar Gadhafi's forces and a bill to cut off funds for U.S. military attacks there. The bill would make an exception for search and rescue efforts, intelligence, surveillance, reconnaissance, aerial refueling and operational planning to continue the NATO effort.

"The president has ignored the Constitution and the War Powers Resolution, but he cannot ignore a lack of funding," said Rep. Tom Rooney, R-Fla., sponsor of the bill. "Only Congress has the power to declare war and the power of the purse, and my bill exercises both of those powers by blocking funds for the war in Libya unless the president receives congressional authorization."

House Republicans and Democrats are furious with Obama for failing to seek congressional authorization for the 3-month-old war against Libya, as required under the War Powers Resolution. The 1973 law, often ignored by Republican and Democratic presidents, says the commander in chief must seek congressional consent within 60 days. That deadline has long passed.

Obama stirred congressional unrest last week when he told lawmakers he didn't need authorization because the operation was not full-blown hostilities. NATO commands the operation, but the United States still plays a significant support role that includes aerial refueling of warplanes and intelligence, surveillance and reconnaissance work as well as drone attacks and bombings.

A New York Times report that said Obama overruled some of his legal advisers further incensed members of Congress.

A coalition of anti-war Democrats and tea party-backed Republicans are expected to defeat the resolution in a repudiation of the president.

"The war in Libya is illegal, unconstitutional and unwarranted. It must end," Rep. Dennis Kucinich, D-Ohio, said.

The fate of the legislation to cut off funds was uncertain.

In a last-ditch effort Thursday, Secretary of State Hillary Rodham Clinton met with rank-and-file Democrats to explain the mission and discuss the implications if the House votes to cut off funds. The administration requested the closed-door meeting.

Rep. Tim Walz, D-Minn., said Clinton apologized for not coming to Congress earlier. But he said she warned about the implications of a House vote to cut off money.

"The secretary expressed her deep concern that you're probably not on the right track when Gadhafi supports your efforts," Walz said.

Rep. Howard Berman of California, the top Democrat on the House Foreign Affairs Committee, said such a vote "ensures the failure of the whole mission."

Earlier this week Clinton said lawmakers were free to raise questions, but she asked, "Are you on Gadhafi's side, or are you on the side on the aspirations of the Libyan people and the international coalition that has been bringing them support?"

In the Senate, backers of a resolution to authorize the operation wondered whether the administration had waited too long to address the concerns of House members.

"It's way late," said Sen. John McCain of Arizona, the top Republican on the Armed Services Committee. "This is one of the reasons why they're having this veritable uprising in the House, because of a lack of communication. And then the icing on the cake was probably for them when he (Obama) said that we're not engaged in hostilities. That obviously is foolishness."

He added, however, "That is not a reason to pass a resolution that would encourage Moammar Gadhafi to stay in power."

Earlier this month, the House voted 268-145 to rebuke Obama for failing to provide a "compelling rationale" for the Libyan mission and for launching U.S. military forces without congressional approval.