Why women in politics matter

The Arab Spring created hope for democracy in which women would at least have a voice. But we're still waiting 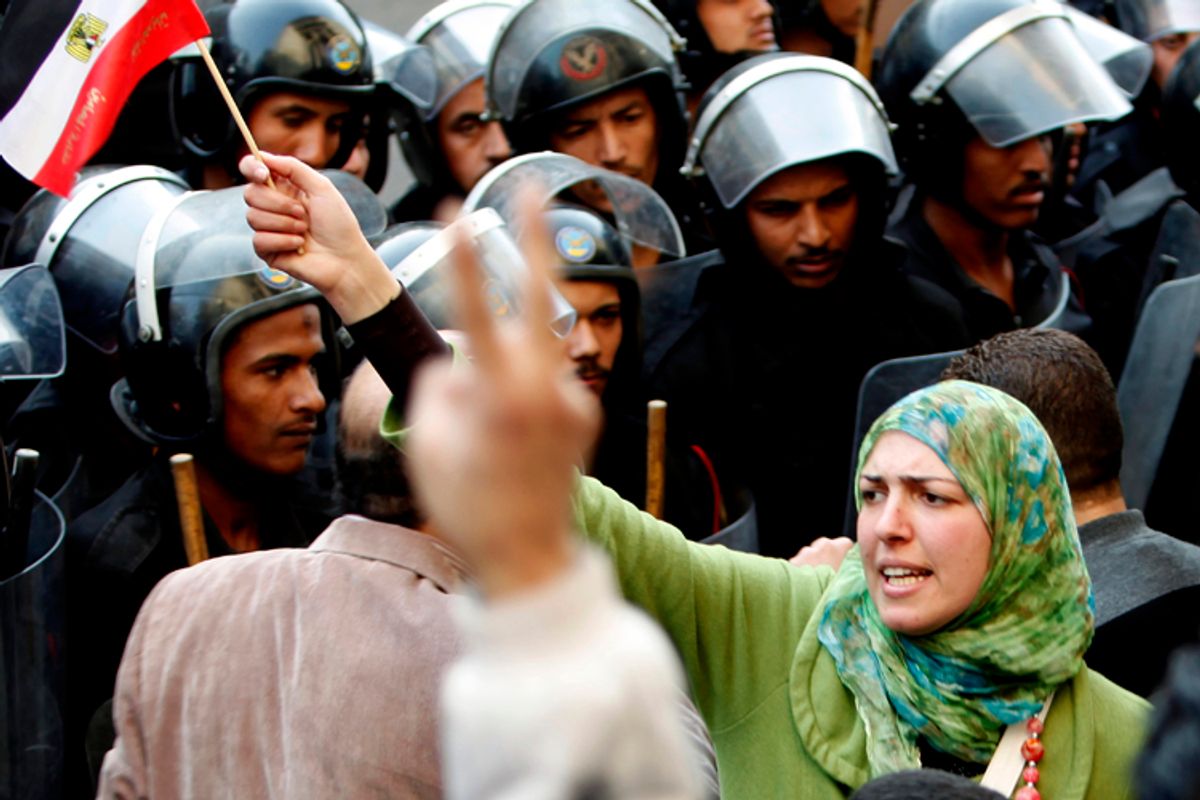 A woman holds an Egyptian flag in front of riot police during a protest in Cairo January 26, 2011. Thousands of Egyptians defied a ban on protests by returning to Egypt's streets on Wednesday and calling for President Hosni Mubarak to leave office, and some scuffled with police. REUTERS/Asmaa Waguih (EGYPT - Tags: CIVIL UNREST POLITICS) (Â© Asmaa Waguih / Reuters)
--

Following a five-month stalemate, Lebanon’s prime minister has finally announced his 30-member cabinet. News reports have concentrated on the representation of various religious factions. But there has been little attention to the fact that all 30 ministers are men. Recent Lebanese governments were dominated by men, but not to the total exclusion of women.

The gender imbalance in Lebanon's cabinet is of additional interest because of the hopes for change generated by the general upheaval in the region. The ousters of presidents Hosni Mubarak in Egypt and Zine el Abidine Ben Ali in Tunisia were both instigated by popular protests that featured discontented women as well as men. Inside and outside of these countries, the role of women in the protests has led to expectations of a type of democracy in which women have if not an equal voice, then at least a voice.

So far, these expectations have been largely disappointed.

In Egypt, only one woman was appointed to the new 27-member cabinet, and a quota system put in place in 2010 to ensure women’s participation in parliament has been canceled by the military council that serves as an interim government, with no alternative mechanisms provided to ensure participation.

In Tunisia, the experience has been better, in particular with a requirement to alternate men and women on party listings for elections, heightening the possibility that women will fill parliamentary seats for successful parties. Still, of 31 ministries, only two are headed by women, and the civil society transition council formed after the former president departed is also overwhelmingly dominated by men.

To be sure, many Western democracies are bad role models when it comes to women's political participation and leadership. In the United States, only 89 of the 535 members of Congress the House -- 16.6 percent -- are women, and fewer than a quarter of the members of the French and Canadian parliaments are women. This situation is appalling and needs to change.

The real question, however, is not who is already doing this right, but rather why it matters. The answer doesn't lie with abstract notions of fairness or unsubstantiated claims that women are a kinder and more altruistic breed than men. It matters because women's political participation and leadership are necessary for democracy to function most effectively.

There are at least two reasons for this.

First, the more closely government represents the composition of society as a whole, the more stable its policies are likely to be. This means that it is not just important to include women, but also to ensure broad representation. For example, Rwanda tops the charts for the percentage of women in parliament, with 56 percent, but most are from the same ethnic group, which some commentators warn could lead to instability.

Second, a mixed-gender cabinet or parliament should, all other things being equal, tend to address more of the concerns that apply exclusively or disproportionately to women. Of course, female politicians don’t always bring up issues that are important to women, and male politicians don't always exclude these concerns. But research has shown that non-feminist women are more likely than non-feminist male colleagues to work on policies that affect women.

Of course, women's political participation and leadership are not the only necessary factors for general peace and prosperity. But they are necessary factors. Supporters of democracy everywhere, whether in Lebanon, France, or the United States, would do well to remember that.

UPDATE: This article originally stated that 72 of the 535 members of Congress, or 13 percent, are women. There are actually 72 women in the 435-member House, and another 17 in the 100-member of chamber, bringing the total number of women in the 535-member Congress to 89 -- or 16.6 percent. The information has been updated in the article.