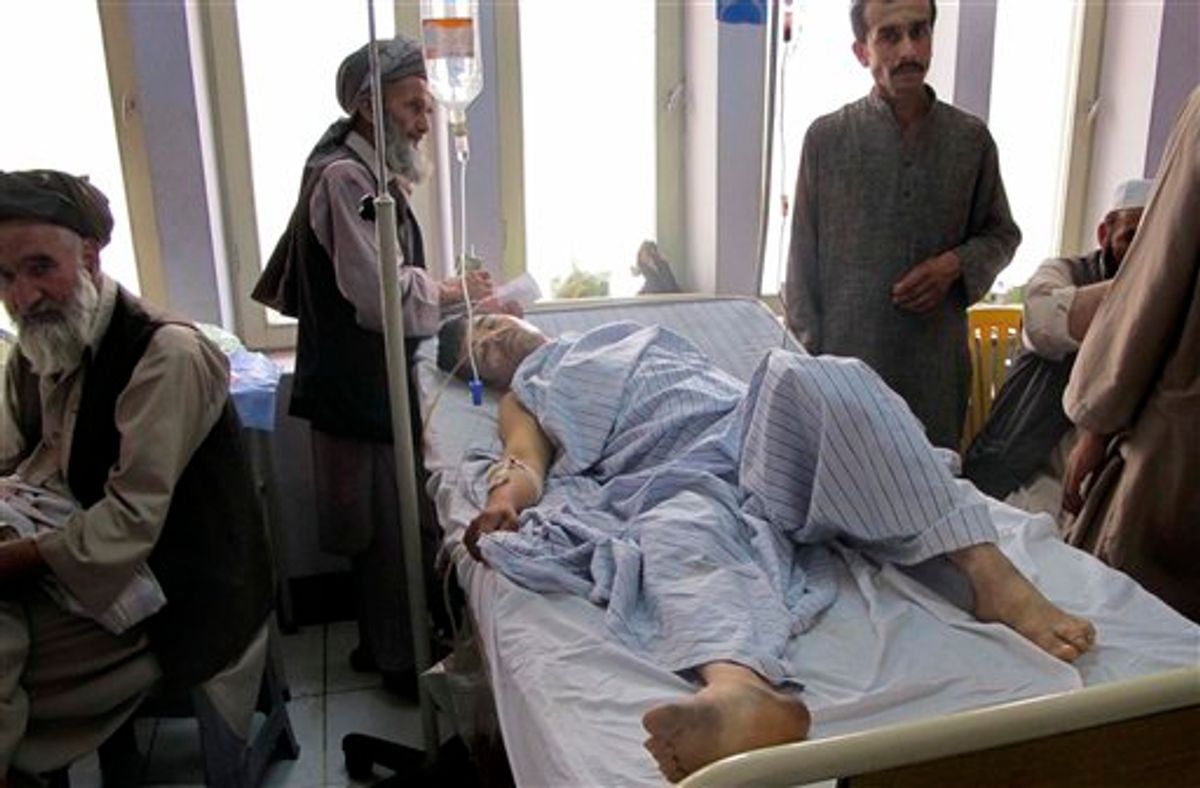 An injured Afghan man, a victim of a blast lies in a hospital bed in Kunduz city in the northern province of Kunduz, Afghanistan, Saturday, June 25, 2011. A bicycle rigged with explosives ripped through a bazaar in the Khanabad district of Kunduz province on Friday, killing at least 10 people, including a police officer. At least 24 people were wounded in the attack, according to an Interior Ministry statement. (AP Photo/Balal) (AP)
--

A suicide car bomber blasted a small clinic Saturday in eastern Afghanistan, causing the building to collapse as mostly women and children lined up for vaccinations, maternity care and other services. At least 35 people were killed in one of the deadliest attacks against civilians this year.

Guards saw a sport utility vehicle charging toward the Akbarkhail Public Medical Center, a compound that provides health care for the mountainous area in the Azra district of Logar province. But before anyone could shoot the driver or blow out the tires, the SUV smashed through a wall and exploded, local officials said.

Wary of being blamed for civilian casualties, the Taliban denied it was behind the bombing. Violence has been on the rise since the Islamic movement launched its spring offensive and promised retaliation for the death of al-Qaida leader Osama bin Laden.

"This attack was not done by our fighters," Taliban spokesman Zabiullah Mujahid told The Associated Press in a telephone interview.

Survivors of the blast and others who heard the explosion frantically dug through the rubble with shovels and bare hands. At least 35 bodies were pulled from the debris and 53 other people were wounded, provincial public health director Dr. Mohammad Zaref Nayebkhail said.

The victims -- most women and children -- included patients, visitors, and medical staffers.

"They were offering important services for the people. We had very good services and lots of patients. There were only 10 beds but lots of other services in that center. It's why the casualties were so high," he said.

Nayebkhail said an Afghan army helicopter was dispatched to the area to deliver medical supplies and to ferry survivors to other hospitals. He said the clinic had recently been expanded to meet the health needs of the far-flung district's population.

The Taliban claims it does not target civilians, but the movement is fractured and Saturday's attacks shared characteristics of recent violence.

Saturday's attack was the deadliest since February, when three men shot to death 38 people at a Kabul Bank branch in Jalalabad. The Taliban claimed responsibility, saying the victims deserved their fates because some worked for the Western-backed Afghan government, which they perceive as illegitimate.

The Taliban also claimed responsibility for a bomb attack in February in the northern province of Kunduz which killed 31 people as they waited for government identification cards.

A recent U.N. report found that May was the deadliest month for civilians since it began keeping track in 2007, and it said insurgents were to blame for 82 percent of the 368 deaths recorded.

Late Friday, another blast -- this one caused by a bicycle rigged with explosives -- ripped through a bazaar in the Khanabad district of Kunduz province in northern Afghanistan, killing at least 10 people, including a police officer, and wounding 24, according to an Interior Ministry statement.

The bombings raised concerns about the readiness of Afghans to take over their own security as the U.S. and other NATO nations begin to withdraw forces. President Barack Obama's announced Wednesday that he plans to withdraw 10,000 U.S. troops from Afghanistan by the end of the year. NATO officials insist the Afghan government will be prepared for full sovereignty by 2014.

The French government reported, meanwhile, that a French soldier was killed after coming under fire from insurgents while on a reconnaissance mission east of Kabul.

The death brings to 47 the number of NATO service members killed in June, and to more than 200 those killed this year, slightly fewer than last year's six-month total.

As violence raged in the provinces, Kabul plunged deeper into a constitutional crisis.

Afghan lawmakers, upset over a controversial electoral investigation, passed a no-confidence resolution on Saturday against the nation's most senior judicial officials, calling for five of them to be fired two days after doing the same for the attorney general.

It was unclear if the decision would actually lead to action against the judicial officials. President Hamid Karzai was in neighboring Iran attending a security conference.

Both votes were taken to protest a special investigative tribunal that invalidated the victories of 62 lawmakers because of alleged improper voting procedures and fraud. The tribunal was requested by the attorney general, endorsed by the supreme court and approved by Karzai.

Some parliament members characterize its findings as an unconstitutional power grab by Karzai and his appointees.

Two-term parliament member Fawza Kofi, not among those named in the tribunal's report, supported the no-confidence votes.

"The tribunal didn't deal with any criminal issues, rather it just invalidated the votes of the people," she said.

She acknowledged the parliamentary vote was largely symbolic, since the body has no power to remove the judges or attorney general. Abdul Malik Kamawi, chief executive of the supreme court, said the votes were unconstitutional and would be ignored.

Deputy Attorney General Rahmatullah Nazery also dismissed the no-confidence votes as illegitimate, since some of the lawmakers had been discredited by the special tribunal. Nazery said his office will refer the tribunal's findings to the Independent Election Commission of Afghanistan, which will have the final word on whether to replace the lawmakers.