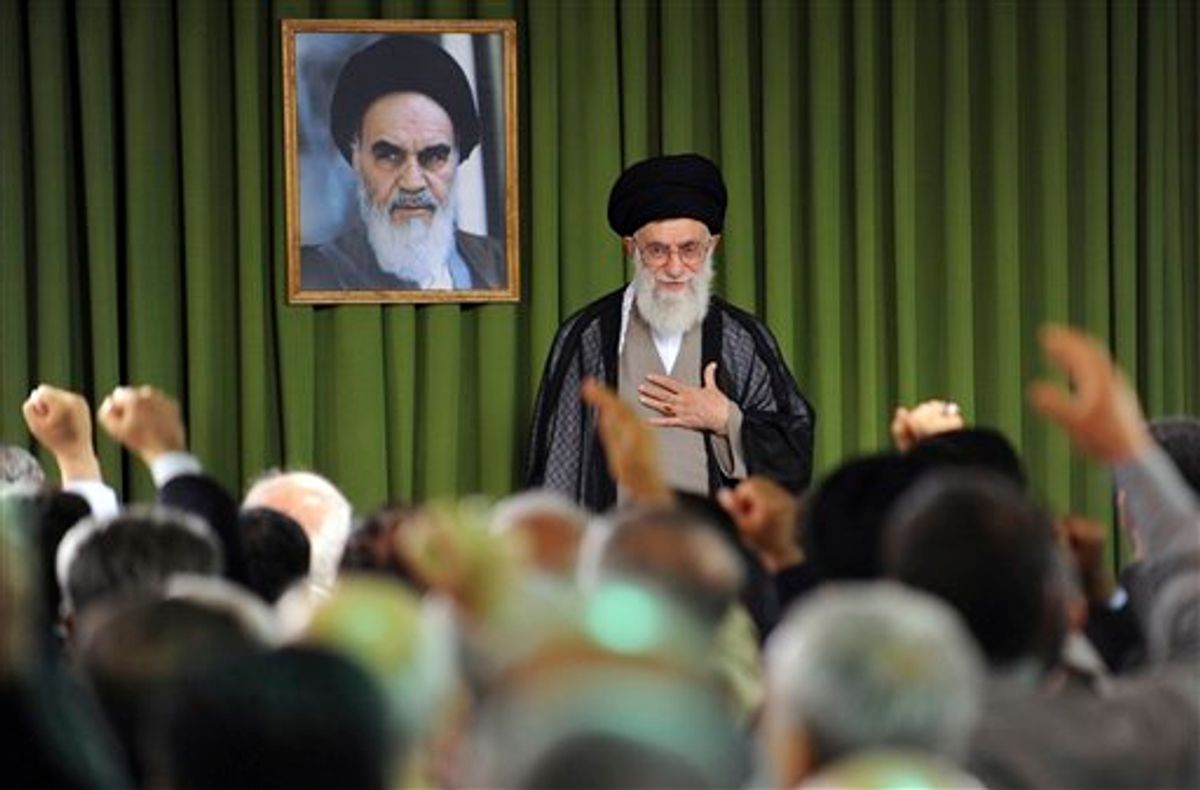 In this photo released by the official website of the Iranian supreme leader's office, Iranian supreme leader Ayatollah Ali Khamenei, places his hand on his heart as a gesture of respect to the lawmakers, foreground, as some of them clench their fists while chanting slogans, at the start of their meeting, in Tehran, Iran, Sunday, May 29, 2011. A picture of the late revolutionary founder Ayatollah Khomeini hangs at rear. (AP Photo/Office of the Supreme Leader) EDITORIAL USE ONLY NO SALES (AP)
--

Iran's supreme leader on Saturday accused the United States of supporting terrorism, pointing to American drone strikes in Pakistan and Afghanistan that he said have killed scores of civilians.

Ayatollah Ali Khamenei said a country whose military forces are responsible for such deaths can't lecture the world about fighting terror.

Strong anti-U.S. salvos are heard regularly from Iran's leadership. Saturday's statement by Khamenei revealed the differences between Iran and the U.S. on the issue of who is a terrorist and who is a freedom fighter.

"The U.S. and the European governments that follow it describe Palestinian combatant groups who fight for the liberation of their land as terrorists," Khamenei said in a written message to an international conference on combating terrorism that opened Saturday in Tehran.

At the same time, Khamenei said, Israeli military strikes that hit civilians or assassinations of Palestinians by Israeli security agents are not condemned by the West as acts of terrorism.

Iranian leaders say Palestinian groups and the Lebanese Hezbollah are fighting to liberate occupied lands. Iran openly praises groups such as Islamic Jihad and Hamas, which have claimed responsibility for suicide bombings and other attacks.

Khamenei said Iran was a victim of what he called U.S. "terrorism" for the 1988 downing of an Iranian passenger plane by the warship USS Vincennes, which killed all 290 people aboard. The U.S. Defense Department said at the time that the crew mistook the plane for a hostile aircraft, which Iran rejects.

"Americans are after setting up permanent bases in Afghanistan. This is a dangerous issue. As long as American troops are based in Afghanistan, there will be no real security," state TV quoted Khamenei as saying.

The United States has said it will have all its fighting forces out of Afghanistan by 2014 and that the security of Afghanistan will be turned over to Afghan forces. The U.S. has not asked for any bases or centers to remain under its control.