The biggest victory for gay marriage yet

The arc of history bends closer to equality -- with Republican votes! 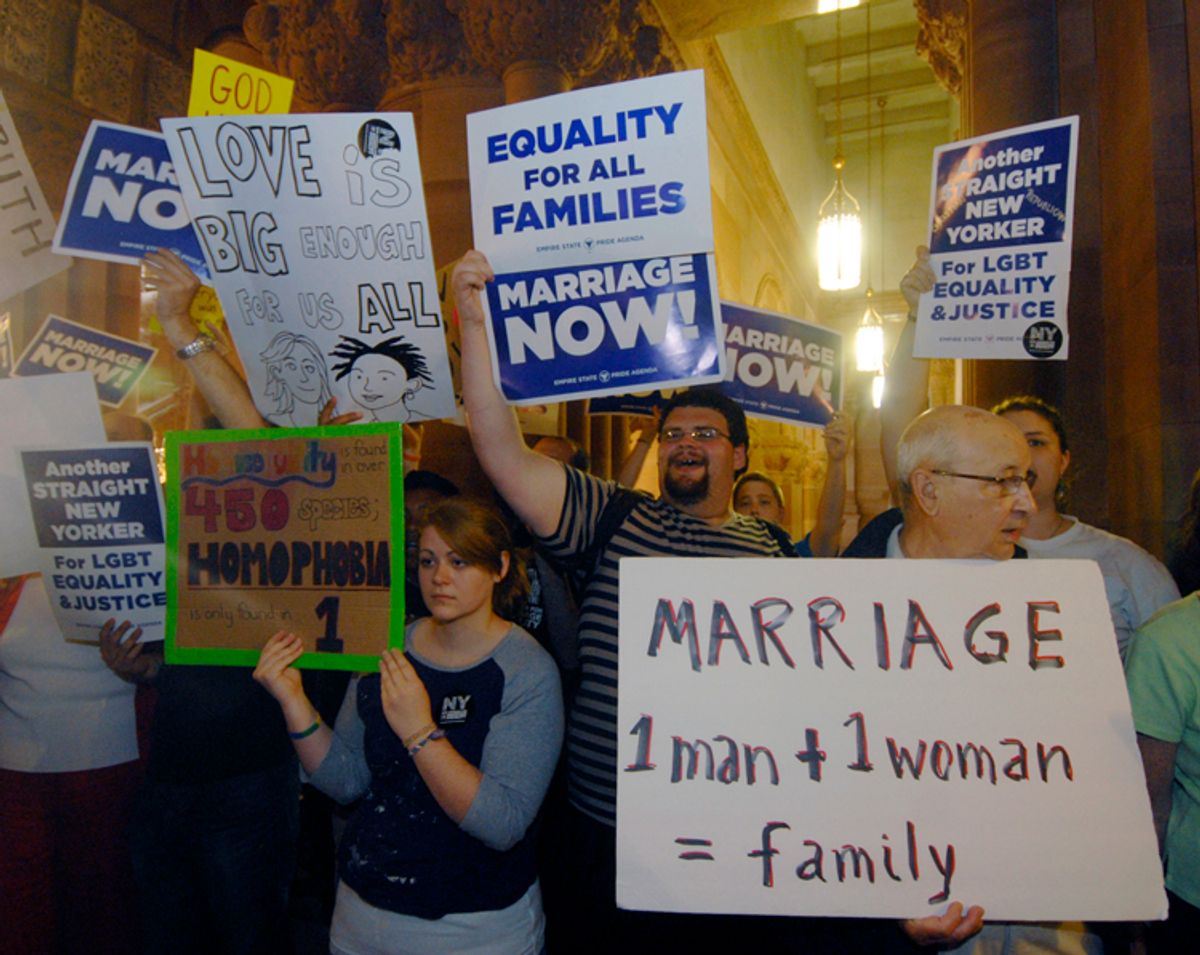 If the New York state Senate was going to pass same-sex marriage, it was going to do so in as aggravating and drawn-out a manner as possible. Days after the official end of the legislative session, on a Friday night, scheduled to be the last item on the agenda. But from the misery of political reporters has come a moment for New Yorkers and LGBT and Americans and their allies to celebrate, with the Senate's 33-29 vote late in the night to legalize gay marriage in the Empire State. The way is now clear for the bill to reach the desk of Governor Cuomo, who will soon sign it into law.

Despite the feeling of inevitability that's surrounded the issue in New York since Governor Andrew Cuomo took office and more or less promised to get it done, same-sex marriage could've easily failed -- and frequently seemed likely to -- up until the last possible moment. That last Republican vote often seemed like it'd never come. Archbishop Timothy Dolan tried to sabotage the vote with last-minute lobbying and an anti-gay marriage sermon at St. Patrick's Cathedral. But the good guys won, which is unusual in politics and unheard of in Albany.

It's huge, though, isn't it? Gay marriage in the third-most populous state in the nation, passed by the elected legislature and not through the courts. And voted for by Republicans. Plural! Just a few years ago, all of that would've seemed absurd or impossible. Wonderfully, it happened just in time for NYC Pride. (Maybe the state Senate Republicans planned it this way!) It ought to give Sunday's march a celebratory air.

And Mayor Michael Bloomberg's financial support for Republicans didn't end up killing the chances of marriage equality (though it certainly made the process much more painful, while Cuomo gets a massive political victory. (How soon before Politico declares him a 2016 front-runner?)

Or, hell, why not 2012 primary challenge to the president? Barack Obama had a big gay fundraiser right here in New York this week, and as everyone has discussed at length, he has he not yet finished "evolving" on the question of gay marriage. He has declared it an issue for "the states," which is what pro-gay Republicans say when they don't want to piss off the Christian right. He may think this victory justifies his position. I've heard pro-marriage equality activists (including Ken Mehlman, the GOP campaign strategist who recently came out after years in the closet) make the case that since marriage victories require Republican support, the president is wise to stay out of the issue. But I'm not entirely convinced, especially because so many people on both sides of the issue already assume the president "secretly" supports gay marriage.

If anything, this victory makes action in Washington even more urgent. Some massive number of gay and lesbian couples will now have their relationships recognized by one state, but DOMA is still allowing other states to ignore them. State recognition of same-sex marriages is wonderful, but without federal recognition, many of the rights and privileges afforded heterosexual couples are still denied to gays. Even New York's new law figures to be tied up in the courts for years, with various parties suing over its language and religious exemptions.

How will our current crop of oft-laughable 2012 Republican contenders respond? Outright gay-bashing has rather suddenly gone out of fashion -- even fervently anti-gay Rep. Michele Bachmann has toned it down in her quest to become a Tea Party leader -- and no one can blame this on "activist judges." But the preservation of opposite-marriage is still probably considered a good way to rally the base, and anyone hoping to be competitive in Iowa will surely denounce... someone. (The Republican-led state Senate? Andrew Cuomo? They'll probably blame Obama.) I'm getting we'll get pro forma denunciations from most of the candidates, though who knows what to expect from Bachmann?

But the small-minded and the bigoted are losing, albeit slowly. We can worry about (or laugh at) them after the parade.