A joy, and pregnancy, that didn't last

My wife and I were never happier than when she was pregnant. And then, suddenly, she wasn't 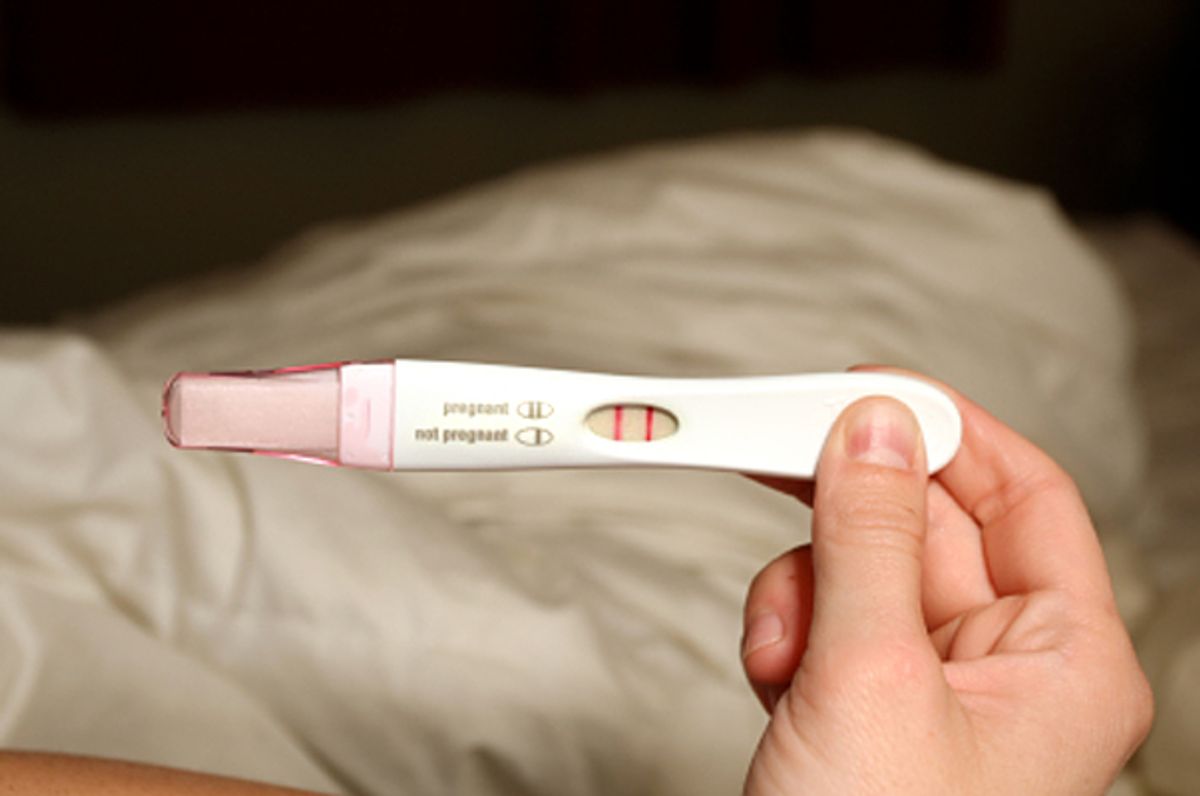 The second pink line appears almost immediately after the first, as Ruby is setting the plastic stick on our bathroom counter. It is supposed to take three minutes, but an answer is right there. We walk into the living room, not feeling our feet on the hardwood. She sits on the couch; I face her in a chair. We grin and stare.

"Wait," she says. "Maybe you should read the directions again."

I float back into the bathroom, smiling like a drunk puppy. "Two lines -- pregnant," I read.

We are ready. I am 30, she is 31. This condo we bought last year is a two-bedroom, McCarren Park is down the block, and the schools in Greenpoint are good. We just spent a decade graduating and clerking and teaching and secretarying and marrying and back-to-schooling and climbing and moving and traveling and fighting and growing and still liking our lives (mostly), and this is the right time for a family.

This could take a year of trying, we heard. You can only get pregnant a few days a month anyway, we heard. But there they are, two pink lines.

The whole testing idea is a whim; there is no waiting through days of lateness, no tense and excited buildup. It's a rare night off for me. She arrives home at 7 and mentions she's one day late. I say, "Let's get a test, then."

She's tired from work and doesn't feel pregnant (a woman knows, you know), so she's sorry she even mentioned it. At this point, though, I'm too wound up by the idea, so we head down to the Rite Aid with the disco ball in the ceiling, and pick up a three-pack of First Response. The whole way home she's telling me it's nothing.

Then, the pink lines. Plopping back into the chair, I clasp her hand between both of mine. "How do you feel right now? You feel good?"

"Yeah, absolutely, I feel good," she says, smiling and smacking my arm.

After passing the next 30 seconds or so like Beavis and Butt-Head -- huh huh, huh huh -- we finally hug, tightly, after realizing that we have received the news in the same exact way. Both shocked and thrilled and without words: perfectly connected.

"Lemme get you some water so we can take another one," I say.

While waiting for her bladder to refill, we order Indian food. By the time she has to go again, we're staring at samosa, our bellies fluttering. Just as fast: two lines. She makes me read the directions aloud again. A hormone called gonad-something. Elevated. Two lines. Pregnant. All righty, time to start googling "First Response accuracy rate." Hm. 90-some percent.

Now the verbal explosion happens. We are blabbing about due dates, and how cool is it that my job writing about baseball means I'd be home all offseason for the third trimester and do you think the doctor would see you tomorrow and oh my god that was fast. OK, let's take the third test in the morning.

In nine years together, there have been periods of distance and misunderstanding -- and periods of finding each other again. The coming together happens when something is ours and no one else's, when we have a secret. When life isn't defined by our jobs.

There is hugging and kissing, and blurted thoughts like, "I've never loved you more than I do right now" -- corny things that we will miss saying when the intensity passes -- and later, in a dark cozy bedroom, falling asleep after suggesting stupid baby names like Birdie and Herman. It is fun to be silly and light.

She uses the third test in the morning; two lines yet again. We leave the trio of pee-soaked plastics on the counter in our living room for more than a week, unable to remove those symbols of a night as pure and elevated as anything we've shared.

This feeling does not stop. We do nothing but grin for two weeks. I am at work; she texts me, "The baby is the size of a poppy seed. We can hear the heartbeat in a few weeks."

The next afternoon, an email, and staggering disorientation. The news arrives electronically because she has forgotten her phone at home, and it is too urgent to wait. I'm typing away in the Wrigley Field press box, bright and bouncy with impending dadhood.

My BlackBerry pings. The message is from "Expectacus," who used to be "Wife" in my contacts. The subject is "bad news."

"My hormone levels are now too high. Doctor says most likely not going to work long-term as a pregnancy. This blows. I wish we hadn't told anyone."

Blink. Blink. Read again. Why had we rushed into those giddy speakerphone calls with our parents, and the proud gathering of our close friends? We know early miscarriages are common, but cannot imagine an interruption to our extended sublime moment. We are surely immune.

We wait nine days for the death. Enough time for, hmm, maybe it will be OK. Then, early on a Saturday morning, she returns from the bathroom and says she is bleeding. Waking, I extend my arms; she sinks into a weepy hug on the bed. She calls herself a failure, which feels like a punch in the stomach to hear.

We aren't crying for long. The rest is dry, boring gloom -- except when it is fear.

The next morning, Ruby is standing in the kitchen. She screams and hunches over; I leap up from the couch. We call the doctor, who says don't go to emergency unless it recurs. It does not. The whole thing finishes with a slow fizzle.

There are nice elements in here with the muck. We were connected first by joy, and now by piercing disappointment, and will probably even miss the uniting depression a bit. Although we will miss the pregnancy more.

Those First Response sticks remain in the house. I have by now moved them into a drawer, but still can't throw them away.

Andy Martino covers the Mets for the New York Daily News and is a former New York City public school teacher. He lives in Brooklyn.