"The Steal": The inner lives of shoplifters

A new book examines the knot of desire, fear and rage at the heart of the five-fingered discount 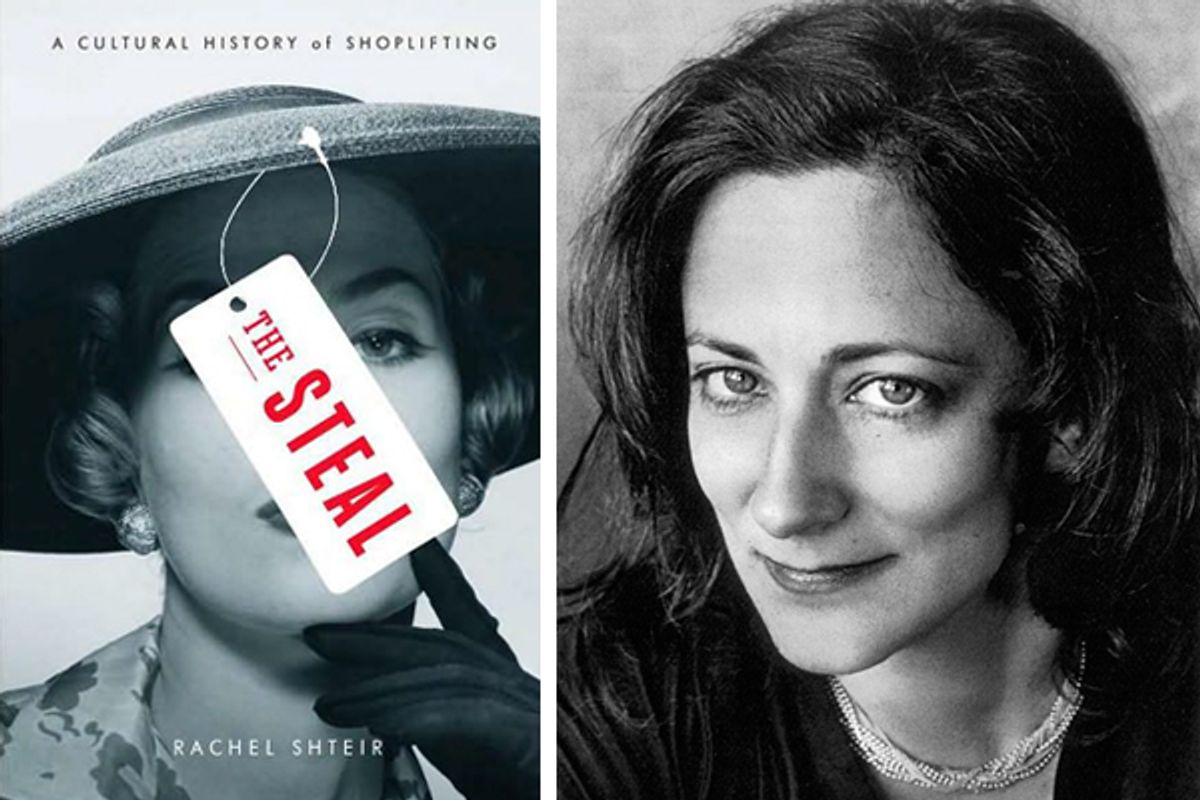 When Rachel Shteir asked security expert Patrick Sobalvarro why his clients -- companies who hire him to protect them from the 10 percent of Americans who shoplift -- prefer not to talk about the problem, his answer was "shame." He believes that the victims of this petty crime, otherwise flinty-hearted capitalists, are embarrassed by the disproportionate ferocity of their response: "Shoplifting is a hush-hush issue because it is a violation, an evidence of something out of control, a weakness."

Maybe, maybe not. They could just be unambivalently enraged by the $35 million retailers lose to theft every day and keen not to put any ideas into the heads of the 90 percent of the nation that isn't currently ripping them off. Still, Shteir's new book, "The Steal: A Cultural History of Shoplifting," is remarkable for the fraught emotional terrain it unveils, the equivalent of a rock lifted up to reveal a squirming array of humanity's least attractive passions: greed, envy, vanity, lust -- pretty much all seven of the deadly sins, when you get right down to it. Which is to say that "The Steal" is queasily compelling, as well as being -- incredibly -- the first wide-ranging consideration of shoplifting written for a general audience.

"Cultural history" is a nonfiction genre with its share of tired conventions, including those two or three initial chapters of potted history, never complete without an obligatory visit with that colossal bore Jean-Jacques Rousseau. "The Steal" is no exception to this rule, and while it is useful to know that shoplifting and other small thefts have been punishable by death in certain historical periods, these chapters are not why anyone will want to read Shteir's book. (Well, except perhaps for the passage about the sensational shoplifting trial of Jane Austen's aunt, which ended in an acquittal, although later evidence suggests that the lady was a klepto.)

The strength of "The Steal" is its reporting. Shteir, a journalist and academic, goes to Shoplifters Anonymous meetings and LP (loss prevention) conventions, interviews Freegan dumpster divers and Spanish anarchists, recounts the lurid trials of such celebrity shoplifters as Hedy Lamarr and Winona Ryder, consults experts on store design, mall cops and reformed specimens of the class of organized professional thieves known as "boosters." She's also appropriately skeptical, noting that retailers have their reasons for casting the majority of shoplifters as boosters, as do self-help gurus and therapists for insisting that most of the thieves suffer from compulsive and addictive diseases that call for treatment.

A third way of viewing shoplifting -- as a kind of social protest -- reached its zenith with the 1960s counterculture and Abbie Hoffman's "Steal This Book." This mentality lives on among some young, broke hipsters who tout stealing as a revolt against corporations and consumerism. Yet none of these categories is entirely distinct from the others. One booster Shteir interviewed described the thrill of shoplifting as "as hard to kick as heroin." And it's difficult to put much credence in a political action that, it just so happens, enables protesters to feast on Swiss chocolate and excellent wine, free of cost.

Examining a shoplifting manifesto circulated by a group called CrimethInc., Shteir dismisses it as "more like a summa of adolescent grudges than a sophisticated political treatise." In other words, it resembles a rationalized list of the stressful events that trigger the compulsive shoplifting of a young woman whose relatives regard her as an addict: She was angry that someone tossed her stuff while she was in jail, or that she had to take the bus, or that her parents paid her rent but no other expenses and therefore "drove her to steal." No doubt the boosters can come up with psychological and socioeconomic justifications for their lives of crime, too.

Without a doubt, however, some chronic shoplifters are motivated by obscure emotional needs alone; they steal things of little value and don't use or sell them. These thieves offer Shteir an unencumbered glimpse of the wet knot of desire, fear and rage that lies at the heart of the crime. Each successful pilfering is a minidrama: "There's this inner fear that a hand is gonna drop on your shoulder as you walk out the door, and when it doesn't, you feel invincible," one man told her. Others describe the experience as "euphoric and tingly." Shoplifting has long -- and inaccurately -- been thought of as committed primarily by frustrated women, and the erotic aspect of the crime is one reason why. The sticky-fingered female behaves badly in order to feel good, which is basically the historical definition of women's sexuality.

The execution of this book leaves something to be desired. Although Shteir occasionally exhibits a flare for dramatic irony (while sitting in a fancy restaurant she spots the Freegan she just interviewed rummaging in a garbage can outside the window and ducks down behind her menu), "The Steal" can also be disjointed and is rife with typos. Still, it packs so much fascinating lore into its 250 pages that it's worth overlooking some infelicities in its composition. Do you know what LP pros regard as a dead giveaway that a shopper is actually a shoplifter? Cheap and/or dirty shoes. Professional shoplifters have managed to make off with such unlikely merchandise as large rolled rugs, decorative trees and kayaks. It's hard not to admire the enterprise exhibited in such capers, which is why, by the end of "The Steal," you can see why their targets would rather keep it all under wraps.

Books Crime Nonfiction Our Picks What To Read