The week's biggest upper? Rainbow-hued, and lighting up Twitter, other states, even Wall Street. Reaction round-up 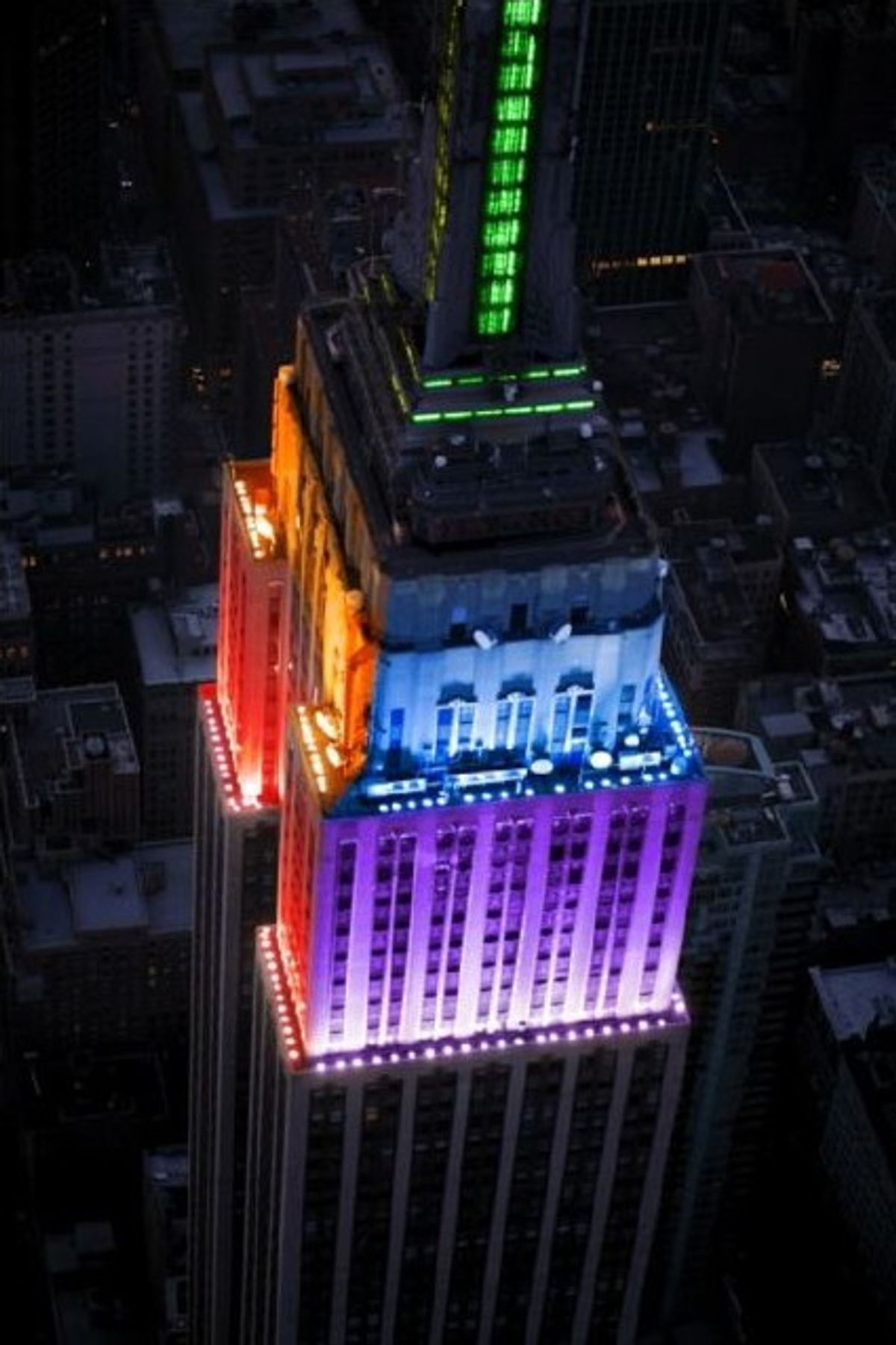 Each week, we comb the Web looking for the best, most inspiring stories out there. And this week, we celebrate New York's landmark passage of marriage equality legislation Friday night. Check it out:

The debate that preceded the historic vote produced a number of impassioned remarks from a number of New York's state senators. (AP)

Governor Andrew Cuomo praises the bill after its passage. (CNN)

New York's state marriage bureaus are gearing up for an "onslaught" of applications in the coming days. (NY Daily News)

Legal experts expect that the landmark legislation will send shock waves through to other states, changing the complexion of the national debate substantially. (Reuters)

One of the states where the same-sex marriage issue has been revitalized is Maryland, which unsuccessfully tried to pass a bill similar to New York's earlier this year. (Washington Post)

One of the unlikely benefactors of the gay marriage victory: Wall Street. (IBT)

A number of notable figures, including politicians, actors, musicians and activists, took to the Twittersphere to commemorate the historic moment.

Lady Gaga (@ladygaga): "http://twitpic.com/5gehdu - The revolution is ours to fight for love, justice+equality. Rejoice NY, and propose. We did it!!!"

Neil Patrick Harris (@ActuallyNPH): “It PASSED! Marriage equality in NY!! Yes!! Progress!! Thank you everyone who worked so hard on this!! A historic night!”

Steve Martin (@SteveMartinToGo): "@AlecBaldwin Alec! Now we can get married!

Danny DeVito (@DannyDeVito): OK we got the marriage thing next lets get t F'k out of all the war's and start building bridges in the USA

Ellen DeGeneres (@TheEllenShow): I'm thrilled about the news from NY. Marriage equality! Every day we get a little closer. What an amazing feeling.

Nancy Pelosi (@NancyPelosi): Tremendous victory in NY for all those who believe in civil rights, fairness & equality for every American! #MarriageEquality

Christine Quinn (@ChrisCQuinn): "I really can’t really describe what this feels like, but it is one of the best feelings I have ever had in my life." [Quinn, the speaker of the New York City Council, is was recently crowned the most powerful openly gay  figure in New York City by The New York Observer.]

Perhaps nowhere are the signs of progress more clear than at Stonewall Inn, where violent riots nearly 42 years ago (to the day) marked a major early milestone in the fight for LGBTQ equality.

What better way to signal an historic New York moment than to symbolize it in Manhattan's signature sky line. Thus, the Empire State Building was rainbow-colored Saturday night.