Will the Obama administration again side with a foreign nation against its own citizens? 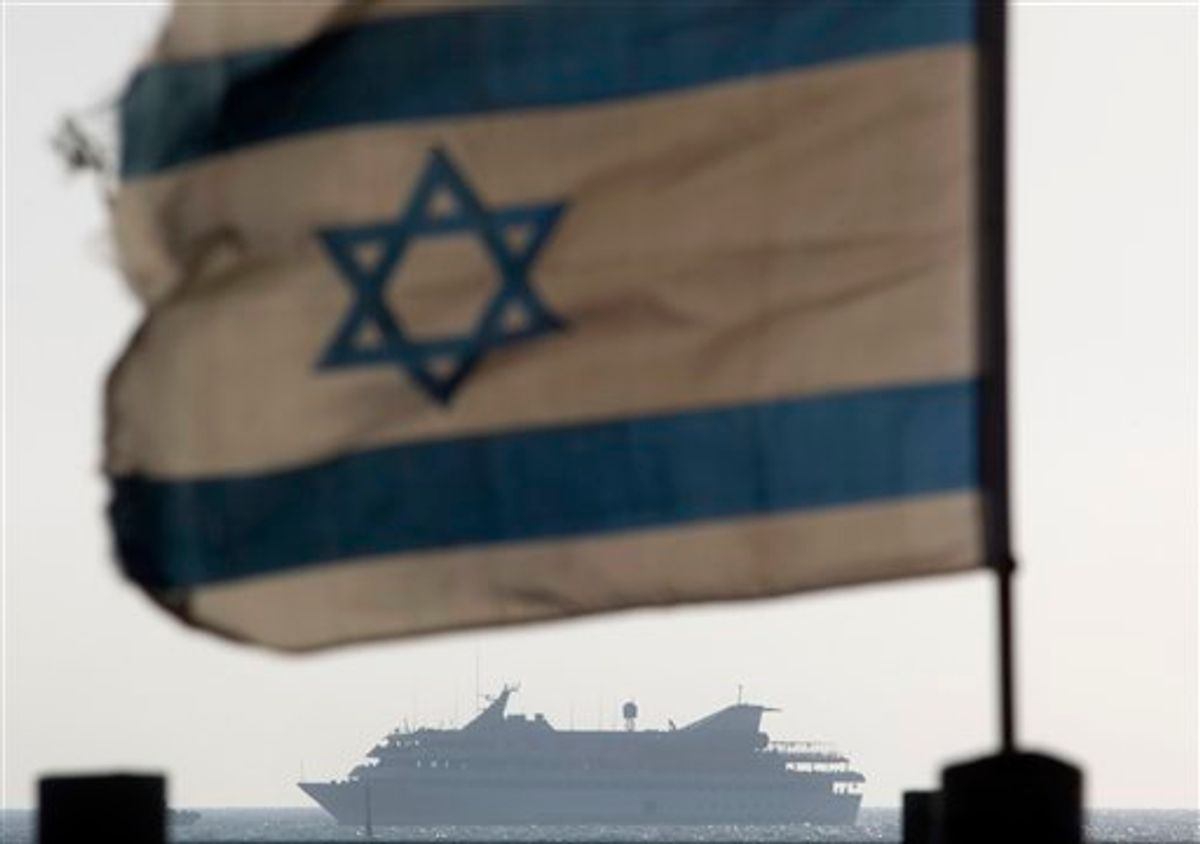 FILE - In this May 31, 2010 file photo the Mavi Marmara ship, the lead boat of a flotilla headed to the Gaza Strip which was stormed by Israeli naval commandos in a predawn confrontation, sails into the port of Ashdod, Israel. Israel on Sunday, June 26, 2011, threatened to ban international journalists for up to a decade from the country if they join a flotilla planning to breach the Israeli blockade of the Gaza Strip. (AP Photo/Ariel Schalit, File) (AP)
--

A co-founder of the right-wing blog RedState (and former Bush speechwriter) created a mini-controversy over the weekend when he issued a sociopathic endorsement of Israel's possible shooting of his fellow unarmed citizens on a flotilla currently sailing to Gaza; that flotilla is trying to deliver humanitarian supplies to Gazans and protest the ongoing Israeli blockade:

When asked by Israeli-American journalist Joseph Dana -- who is covering the flotilla for The Nation -- whether that sentiment applies to the shooting of journalists on board the ships, this was the reply:

Condemnation of this outburst was pervasive but also easy: cheering for a foreign army to shoot unarmed protesters -- one's fellow citizens -- is self-evidently warped; that this came from a right-wing war-cheerleader-from-a-safe-distance with endless pretenses to uber-patriotism just added a layer of irony (Dear Foreign Nation: go ahead and shoot and kill Americans).

But over the weekend, U.S. Secretary of State Hillary Clinton also gave her views on the flotilla, and while her rhetoric was somewhat more restrained than that quoted above, she also seemed to endorse possible violence by this foreign nation against her own country's peacefully protesting citizens:

Well, we do not believe that the flotilla is a necessary or useful effort to try to assist the people of Gaza. Just this week, the Israeli Government approved a significant commitment to housing in Gaza. There will be construction materials entering Gaza and we think that it's not helpful for there to be flotillas that try to provoke actions by entering into Israeli waters and creating a situation in which the Israelis have the right to defend themselves.

Though Clinton's language was draped with the subtleties of diplomatese, there is little doubt that she, too, is justifying a potential attack by a foreign government on unarmed American protesters (ironically, Clinton's remarks came at the same Press Conference where she impugned the patriotism of others -- namely, critics of the Libya War -- by branding them as "on Gadaffi's side").

The perception that Clinton endorsed possible Israeli violence against Americans is bolstered by the conduct of the U.S. Government in the wake of Israel's attack on the prior Gaza flotilla, when Israel killed 9 people, including the unarmed 19-year-old American citizen (and Turkish citizen) Furkan Dogan.  While most governments instinctively condemn the killing of their own unarmed citizens by foreign armies -- Turkey was furious at Israel for months and world leaders in virtual consensus harshly condemned the Israeli aggression -- the Obama administration almost immediately took Israel's side, culminating with Joe Biden's disgusting rhetorical question, posed before the American teenager was even buried: "what's the big deal here"?

The United States on Friday warned activists against plans to send a new aid flotilla to challenge Israel's blockade of the Gaza Strip, saying it would be irresponsible and dangerous. . . . "We underscore that delivering or attempting or conspiring to deliver material support or other resources to or for the benefit of a designated foreign terrorist organization, such as Hamas, could violate U.S. civil and criminal statutes and could lead to fines and incarceration," [State Department Spokesperson Victoria] Nuland said.

In contrast to the Israel-must-always-be-defended mindset of U.S. political officials, compare how other governments view the possible shooting of their citizens by a foreign country:

"Israel must exercise all possible restraint and avoid any use of military force if attempting to uphold their naval blockade," Gilmore, who also holds the post of trade minister, said after meeting with Israeli Ambassador to Dublin Boaz Moda.

"In particular, I would expect that any interception of ships is conducted in a peaceful manner and does not endanger the safety of our citizens or other participants," he added, reiterating the country's position that the Gaza blockade was "unjust and counterproductive'" and that the violence that marked last year's flotilla venture was "completely unacceptable and unjustified."

That type of uncontroversial statement -- you shouldn't shoot our unarmed citizens -- is inconceivable when it comes to the U.S. and Israel.  So devoted is the U.S. Government to defending the actions of Israel's that it will even preemptively justify violent attacks on its own citizens, threaten Americans protesting Israel's policies with prosecution for aiding Terrorism, and isolate itself from the world to defend them.

Meanwhile, like the U.S., Israel is issuing its own menacing threats.  Yesterday, Israel announced that any journalists who are on the flotilla merely to cover it will be subject to a 10-year-ban from the country and the confiscation of their equipment. As noted this morning by the New York Times -- one of whose reporters intends (or at least intended) to be on the flotilla -- this is but the latest Israeli attack on press freedoms as a means of suppressing reports and examination of their conduct:

Two and a half years ago, when Israel invaded Gaza to stop Hamas from shooting rockets at Israeli communities -- about 8,000 had been fired -- the Israeli military barred reporters from entering Gaza to report on the war.

There was no public outcry, but the Foreign Press Association took the case to the Israeli Supreme Court, which ruled that the army had acted improperly. It ordered the army to admit a small groups of reporters. Commanders kept saying that it was unsafe, and it was not until the last day of the war that the foreign journalists were allowed to enter.

Israel did the same thing in the wake of the last flotilla attack, confiscating all video and other evidence from passengers and detaining on-board journalists, all to prevent the world from learning what it really did, ensuring that the heavily edited propaganda video the IDF produced and released to the world could not be critically examined. It's strange that a country which incessantly claims that it acted properly is so fixated on suppressing journalistic freedoms and reports about what it did. And one thing is certain: if Israel does make good on its threats to violently attack protesting passengers and/or punish journalists for covering the event, the U.S. -- even as it lectures the world on the evils of identical behavior -- will have nothing but praise to offer.

UPDATE:  Israel now appears to be backing away from its threat to impose a 10-year ban on journalists, instead announcing it will "find a formula" to determine the proper sanction (h/t sysprog).  What's most remarkable about all of this is that this flotilla (like the last one) has no intention of entering Israeli waters, nor is it delivering anything other than basic humanitarian supplies.  It is, manifestly, a theatrical, non-threatening form of peaceful protest against the blockade. Yet Israeli and U.S. officials continue to bloviate about "self-defense," "entering into Israeli waters," and criminally aiding Hamas; all of that is nothing more than a by-product of the notion that they own the world, and anyone who fails to honor that claim is either a Terrorist-sympathizer or even a Terrorist.

UPDATE II [Tues.]:  I highly recommend this amazing story of how Israeli flotilla opponents got caught red-handed manufacturing and distributing an obnoxious, offensive fraudulent propaganda video, with the help (unwitting or otherwise) of the Israeli government.  As the links in that story demonstrate, this is anything but unusual.