What being a "flake" really means 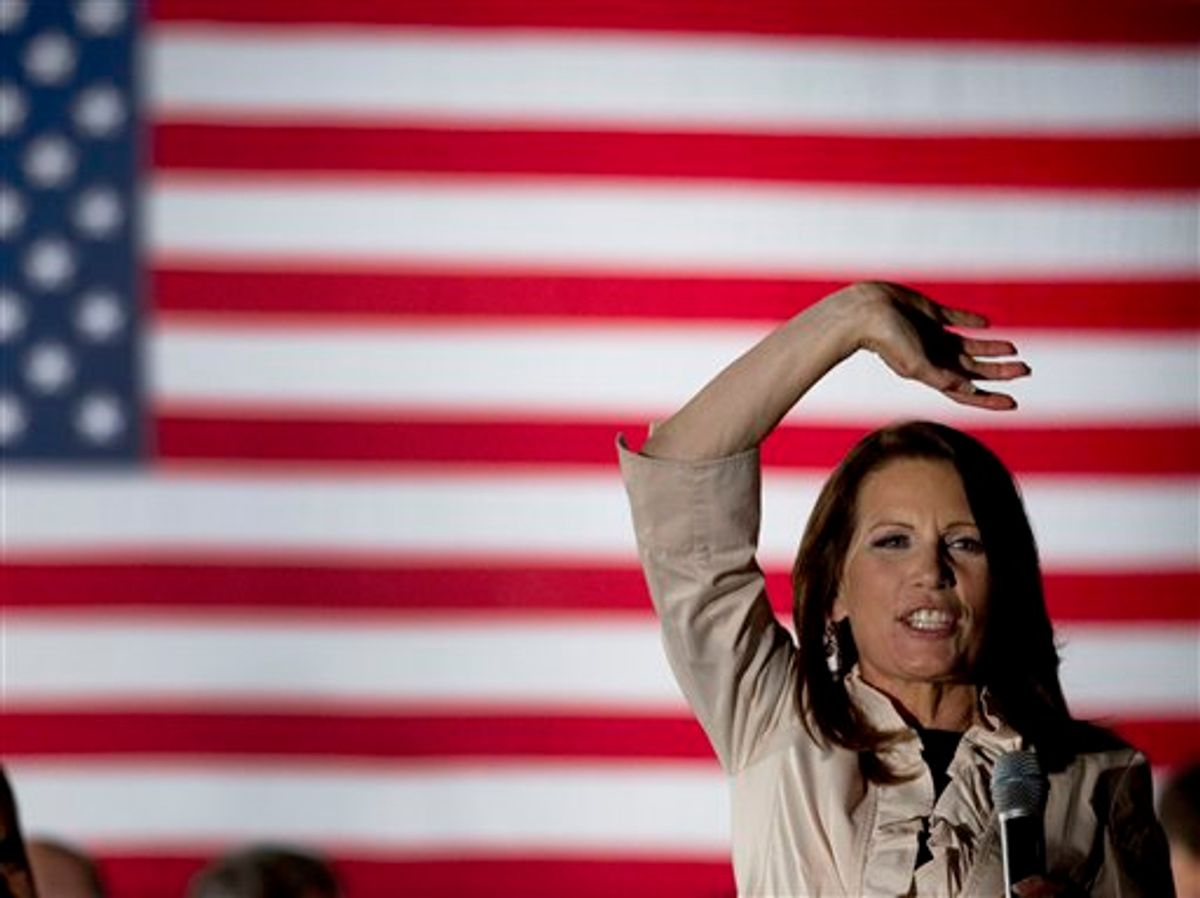 U.S. Rep. Michele Bachmann, R-Minn., waves to the crowd during a welcome home event in her hometown of Waterloo, Iowa Sunday, June 26, 2011. Bachmann said Sunday her bid to unseat President Barack Obama shouldn't be viewed as "anything personal" against the Democrat. (AP Photo/Charlie Riedel) (AP)
--

The best way to understand Michele Bachmann's interview with Fox News' Chris Wallace on Sunday (in which Wallace repeatedly suggested that the Minnesota congresswoman is perceived as a "flake") is that it's mainly beneficial to her in the short term -- but also a sign of why her campaign for the GOP nomination is likely to ultimately hit a dead end.

By most measures, Bachmann handled Wallace's questions well, calling them "insulting" and then keeping her cool as she recited her résumé and pretended not to know why anyone would think that she has (as Wallace put it) "a history of questionable statements, some would say gaffes." Her fans then flooded Wallace with complaints, and the host quickly issued an apology -- which Bachmann refused to accept in a subsequent interview with ABC News' Jonathan Karl.

"I think that it's insulting to insinuate that a candidate for president is less than serious," she told Karl. "I'm a very serious individual."

For now, this couldn't have played out much better for Bachmann, who has been surging in polling since her debate performance a few weeks ago. A Des Moines Register survey released over the weekend puts her in a virtual first-place tie in Iowa with Mitt Romney. Her appeal, of course, is concentrated among Christian conservatives and Tea Party activists -- voters whose political engagement is already fueled by intense feelings of resentment and victimhood. Watching a television anchor -- even on Fox -- disparage Bachmann to her face will only draw them closer to her. Bachmann is fundamentally a candidate of the party grass roots, and an incident like this serves to bind grass-roots conservatives to her. In this sense, then, Wallace did Bachmann a big favor.

But his line of questioning was also revealing. He cited several examples of outrageous comments by Bachmann and when she objected to the term "flake," he said, "But you understand when I say that, that that's what the rap on you is." Consider Wallace in this exchange the voice of a significant chunk of GOP elites -- people who are committed to throwing Barack Obama out next year and electing a Republican and who believe that Bachmann, as the nominee, would undermine that effort.

Right now, Wallace doesn't hurt Bachmann by suggesting she's a "flake." But imagine the scene six months from now, if Bachmann does end up winning Iowa. She'll be all over the news. Money will be pouring into her campaign. Her poll numbers will surge elsewhere. And the GOP's elites will suddenly be forced to confront the possibility that she could roll to the nomination -- unless they unite to send clear, unmistakable signals to rank-and-file Republican voters that supporting her would not be healthy for the push to unseat Obama. They may not use the specific term "flake," but make no mistake, at that point a chorus of elites will speak up to deliver the same basic message that Wallace communicated on Sunday.

As I've noted before, we've seen this phenomenon in the past. It happened to Pat Robertson, who was instantly marginalized by party elites after his shocking second-place finish in Iowa in 1988. It happened to Pat Buchanan, when he pulled off a victory in the 1996 New Hampshire primary. And it will almost certainly happen to Michele Bachmann if she does manage to ride a tide of resentment and victimhood to a victory in Iowa next winter.