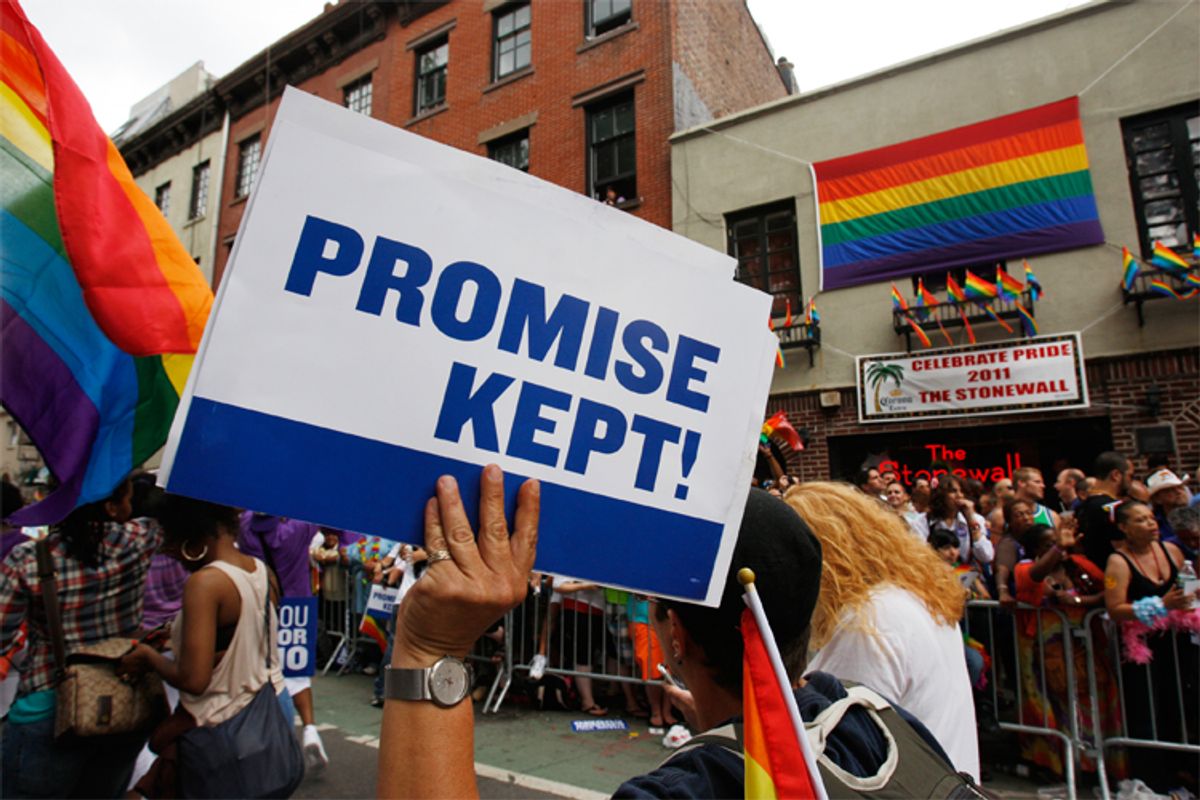 A participant in the Gay Pride Parade marches past the Stonewall Inn in New York on June 26.
--

New York's legalization of same-sex marriage has hit the National Review particularly hard. The magazine is based out of New York and has had a strong conservative Catholic bent since William F. Buckley founded it. Gay marriage in other states was something of an abstraction, distasteful but explained away as the work of activist judges. This, though, brings state acceptance of the gay lifestyle right into the National Review's backyard. And most worryingly, it happened over the vocal objections of both the Archdiocese of New York and the state's Conservative Party, the line on which William Buckley himself once ran for mayor.

The first Corner post on the vote, predictably, was headlined "Empire Shame," and it was brief, and defeated-sounding. But then everything went off the rails.

The Corner actually ran a surprisingly sympathetic report from the Stonewall Inn the night the vote happened. (Sympathetic if a bit zoological in tone. Gay people, Michael Potemra tells us, can look surprisingly "demure," which you may not know if you've only ever seen them in parades. "I learn tonight that the annual gay-pride march is on this very Sunday....")

Potemra made mocking reference in his Stonewall story to Archbishop Timothy Dolan's glib invocation of North Korea in an anti-gay marriage blog post earlier this month. That set off Kathryn Jean Lopez, the fragile, abortion-hating, anti-sex former editor of the National Review Online, whom I generally tend to imagine scribbling "Mrs. Kathryn Ratzinger" in her Lisa Frank journals.

Do not be so quick to dismiss the North Korea comparison, Mike. We are witnessing tyranny today that is fostered by a false sense of freedom, a tyranny that faux tolerance ferments.

Jason Lee Steorts, the managing editor of the National Review, then decimated K-Lo's (and the archbishop's) non-argument in a devastatingly sarcastic post that went up about 45 minutes later:

So it is your view, Kathryn, that the action of democratically elected representatives, who are accountable to the citizens of the State of New York, is tyrannical in a way that justifies comparison to North Korea, a state in which an absolute ruler has burned people alive in a stadium. Okay. But now I want a new word for what "tyranny" used to mean.

I would like to see the reaction of a North Korean refugee to your claim.

It would also be nice if you troubled yourself to make an argument.

There follow four separate updates in which Steorts apologizes for his tone but continues to criticize Lopez for defending a claim that he finds "absurd and offensive to North Koreans":

It will be good to find out whether Kathryn thinks the procedure of enactment is tyrannical, the substance, or both. I hope, in offering an exegesis of the context of the Dolan quote, she will say what she understands by "dictate," and how the process of enactment constituted dictatorial tyranny of a kind specifically similar to the North Korean or Chinese (as opposed to, say, the Canadian), and how what has happened here is that the state has presumed omnipotence in a North Korean or Chinese fashion rather than the people’s having wickedly done this through their elected representatives, through whom they may also change their minds — a process not commonly witnessed, I do believe, in North Korea or China. All this if the point is that the procedure of enactment is tyrannical. If the substance, I suppose she can just mention the famous North Korean and Chinese tendency to redefine civil marriage as New York has done, and we will grant its deviance from her understanding of natural law, and the equivalence of this with tyranny, without requiring her here to defend all that.

All of this is terribly entertaining -- like watching Mom and Dad fight, if you didn't like your parents, and one of them was kind of dumb.

Potemra followed up with a gentler rebuke that still clearly mocked the vague and unlikely predictions of the doom that shall come to the American soul once we let the homos get hitched. K-Lo was reduced to quoting emails and smarter anti-gay thinkers than she. She idly wished that gay marriage had been a ballot initiative, because direct democracy is much less tyrannical than representative democracy. Eventually she moved on to attacking Amy Poehler for being a baby-killer.

At this point -- just like the critics predicted, once we passed gay marriage -- it is practically anarchy at the Corner. Conservatives making pro-gay marriage arguments left and right! Criticizing George Weigel! Invoking Eisenhower and the biblical King David!

Don't worry too much, though: The Corner is still your best bet for dudes warning that the world is going to hell because they saw some lesbians on the train.