"Go the F**k to Sleep" and Tracy Morgan's comedy battle

Tracy Morgan's latest gaffe, and an absurd CNN piece about "Go the F**k to Sleep," show how subjective humor can be 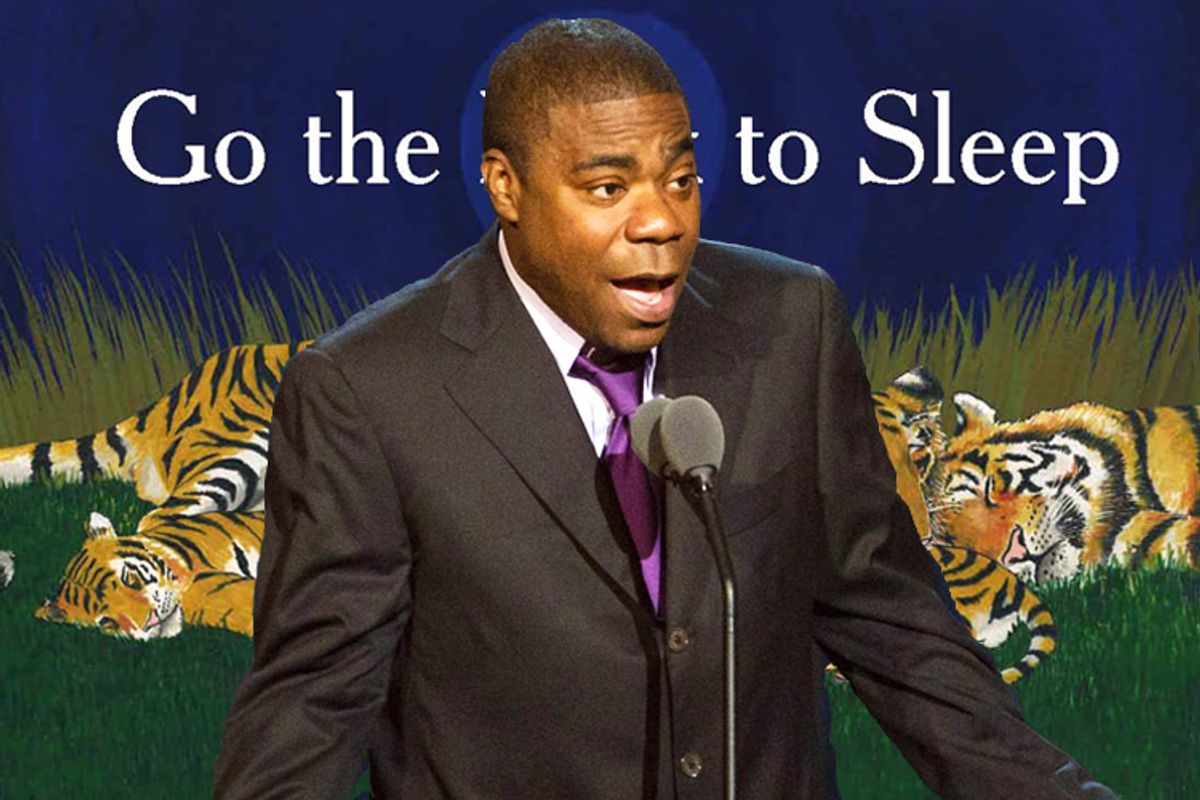 What's more absurdly hilarious than an ersatz bedtime story called "Go the F**k to Sleep"?  Funnier even than Werner Herzog or Samuel L. Jackson reading it? Answer: The uproariously hyperbolic opinion piece that ran Monday on CNN – CNN! --  by author Karen Spears Zacharias, who claims, "The violent language of 'Go the F*** to Sleep' is not the least bit funny, when one considers how many neglected children fall asleep each night praying for a parent who'd care enough to hold them, nurture them and read to them." Wah wah waaaaaaah.

Zacharias, whose bio says she has a forthcoming memoir on the murder of 3-year-old Karly Sheehan, is careful in her piece to state that "Nobody is suggesting that there's a connection between Adam Mansbach's book and child abuse or child neglect" and that "Mansbach is undoubtedly the kind of father who heaps love, affection and attention upon his daughter." But, as she explains, "the lines of what's appropriate parenting have become blurred" and, as a concerned Oregon attorney says, the book is full of "violent language in association with children." For the corker, she quotes child development expert Dr. David Arredondo, who implores, "Imagine if this were written about Jews, blacks, Muslims or Latinos," and she says, "It is hard to imagine this kind of humor being tolerated by any of the marginalized groups Arredondo cited." I wonder, is that because the sleep habits of Jews, blacks, Muslims or Latinos aren't relevant? Because "Take a Nap Right Now, Goddammit, Person of Color" just doesn't make a lick of sense?

Zacharias, whose comedic credentials include a blurb from Jeff Foxworthy, has drummed up a world of disagreement; her story has received over 2,000 comments in just one day since her bizarre Op-Ed appeared. The more restrained can be summed up by the reader who noted "Humor helps people deal with stress" and the person who suggested, "This lady is out of her mind."

It has ever been thus that one person's laff riot is another's big fat "I don't get it." I may never comprehend Mr. Bean, but I won't be outraged if that's your thing. But the line between funny and not funny gets blurrier when the question becomes whether or not the comedy is offensive. Tracy Morgan got in hot water this month for a routine in which he said "gay is a choice," and that his son "better talk to me like a man and not in a gay voice or I’ll pull out a knife and stab that little nigger to death" -- a bit Louis C.K. defended by saying, "It's a dumb thing to take at face value." But Morgan himself nailed his real problem with the bit, noting later simply that he said "really stupid shit." He then atoned for his anti-gay remarks by doing a routine about how "Them young retarded males is strong ... like chimps." So he may still be feeling his way around that one.

Comedy explained isn't comedy at all. And when you speak up and say that something is offensive, you inevitably run the risk of being labeled a humorless scold. But real humor rarely involves taking cheap shots at groups of people who are regularly misunderstood or victimized. It comes instead from observation of the absurdities of life, from the frustrations of being the underdog, from sticking it to the man. Being shocking is fine; taking lazy jabs at the already put-upon is to bomb unforgivably.

That's why it's so silly to take umbrage at "Go the F**k to Sleep," because Zacharias doesn't seem to get who the joke is on. She argued Monday on Twitter that "The point is that far too many children live in homes where ugly thoughts are acted upon," as if ugly thoughts inevitably lead to ugly deeds, or ugly thoughts shouldn't be laughed at. It's not that sometimes children aren't verbally browbeaten for real. But Mansbach's humor is about the tyrannical boss -- the boss, in this instance, being the baby. And if you're a parent, you damn well know who wears the poop-loaded, spit-up-stained pants in your torturously sleep-deprived relationship.

As Steve Martin once explained, comedy isn't pretty. It's not supposed to be. It just has to be funny. And while everybody has a different sense of what constitutes hilarity, it's safe to bet if you're endorsed by Jeff Foxworthy, you're no expert.